Well, I’m overwhelmed by the 200th episodes of SUPERNATURAL to the point where my eyes are moist. After ten years of melodrama and a tumultuous relationship with its rabid fan base, “Fan Fiction” takes the opportunity to heal a little bit of the damage inflicted over the years, and to let the Winchester brothers know that while their formula might be long-standing and completely unchanged, being together forever on the road still works. Also: musical.

Buffy the Vampire Slayer sets the bar astronomically high for musical episodes, and Supernatural ‘s subject matter is similar, so I’ve always wondered how they’d make a musical episode work without demons and spells forcing everyone to start belting out tunes. The conceit that Supernatural settles on is perfect: an all-girl’s school is putting on a stage adaptation of the in-universe Supernatural books (i.e. the first five season of the series) and each one of the girls kindly and positively represents a different aspect of the Supernatural fandom which is a new and welcome change. The all-male story put on by an all-female cast hangs a lampshade on the hyper-masculine image that the series tries to project and the almost entirely female fanbase that it’s collected. I’ve had a list of requirements for a Supernatural musical episode for a few years now–none of those required elements were in this episode. But, every single thing on my list was commented on by Dean Winchester over the course of the story, so my entire list is forgiven. Dean Winchester and I have a special relationship. (“There is no singing in Supernatural. … I mean, if there was singing–and that’s a big if–it would be classic rock!”) 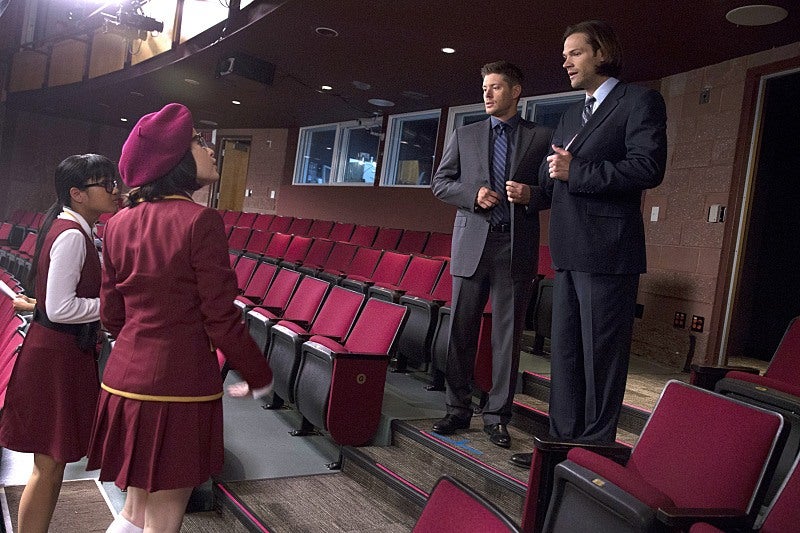 While Sam and Dean are understandably flustered to walk into an auditorium and find a bunch of teenage girls melodically retelling their life story, and Dean Winchester rolls his eyes at all the slash, Sam is into all the cutesy ship names and uses them to poke fun at Dean. The episode takes particular pains to say at least three times that fan interpretations are completely valid–and the words come out of Dean Winchester’s mouth. (Ackles is notoriously the most prickly with respect to fan questions about sexual orientation and erotic fan activities.) Marie, the writer/director of the school production, explains that the two actresses playing Sam and Dean are rehearsing their “BM moment”–short for “Boy Melodrama” a term which I will henceforth steal since I like to call the first season “The Manpain Season.” During the actual play, Marie takes on the role of Sam (as a hardcore Sam Girl) and sings a song about Dean entitled “A Single Man Tear” which had me in stitches. Poor Dean has had plenty of run-ins with fandom, but never once met a “Dean Girl” which annoys him to no end. (Come see me, mister, I’ll bake you a pie. We can take out some ghosts. It’ll be fun.)

So is the musical aspect of the episode high art? Not in the least. And it doesn’t even try to be, for which they get my major kudos. The actors themselves are not singing the songs, there’s no pretext for getting them to dance around, and Sam and Dean have to watch their lives get played out as a reminder that they work best together and that every interpretation of the story is a valid interpretation. For once, the meta episode is celebratory rather than a condemnation. I’m a bit embarrassed sometimes that I forced my entire family to love this show because every time the meta episodes crop up they insist that they’re about me. The main reason this episode works is because it’s playing straight off of not only the entire ten-year corpus of the but it also casts every aspect of fandom drama–including shipping, strange fan fiction scenarios, slash fiction, and canon whores–as a personified bit of a high school drama department.

But what makes this episode even better is that it’s not just about the Winchester brothers stumbling across an amateur production about their lives–there’s actually a monster here that needs vanquishing. The muse Calliope has attached herself to Marie, feeding off the meta-textual nature of the play as much as she feeds off the creative act. To kill the monster, Sam and Dean have to let the show go on, as people who try and stop it are kidnapped and the monster will only show herself once the play is complete. The climax of the monster part of the episode involves showering most of the audience in purple goo, which also had me in stitches. My abs hurt. 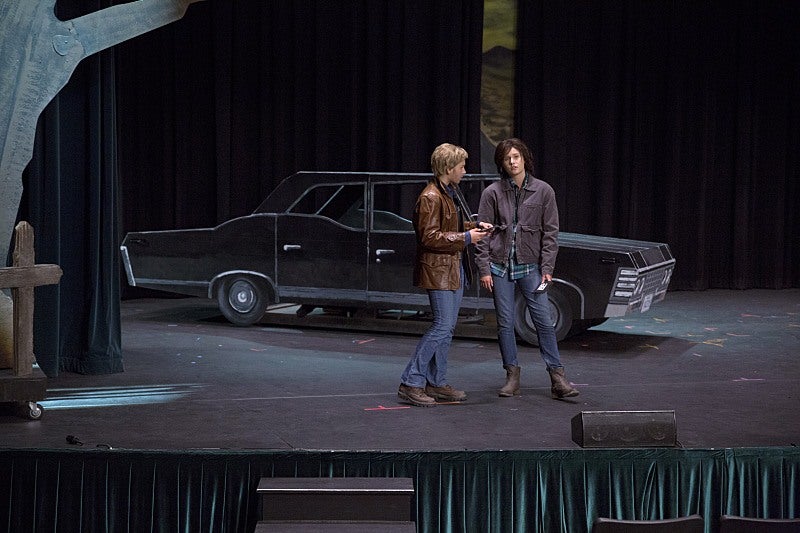 Even from the beginning the small homages are both sweet and celebratory of the show’s long run. The recap is nothing but the title page of the Supernatural pilot being typed out on a computer screen. Literally every single title card–including the ones for special episodes–is flashed in quick succession until we get to this season’s. The shot of Dean and Sam getting ready to go out on the hunt is a perfect mirror image of the last shot from the pilot, angled from the Impala’s trunk as they throw in a shotgun. The girls’ play also points out that Adam (the virtually unknown and entirely forgotten half-brother of Sam and Dean) is still stuck in the cage with Lucifer in Hell–a fact I’ve seen send entire groups of people into internet meltdowns. It’s good to know someone still remembers Adam’s plight.

Rather than have Sam and Dean do their usual melodramatic conversation about how much their lives suck but they need each other, the girls playing Sam and Dean in the play have it for them. The most stirring part is when the entire cast of the play sings “Carry on Wayward Son” and Sam and Dean actually hear the lyrics which, from day one, have been eerily applicable to their story. I’ve always felt like they could do with hearing it and taking it to heart. After the play is done, Marie gives Dean the “Samulet” prop and a stern lecture about brotherly love. Dean hangs the over-large polymer clay rendition of the early-seasons icon on the Impala’s rear view mirror. The fan presence, it says, is always with us. In the last shot it turns out someone used the ticket Marie left for the publisher. She gushes a bit, asking how the mysterious man liked their play. Slowly, we pan up to Chuck (yes, the Chuck–Chuck, implied-to-be-God, disappeared-with-Kripke Chuck) who gives his gentle blessing.

I couldn’t think of a better way to celebrate 200 episodes on this crazy road. It took ten years, but it feels like an olive branch has been extended from the canon to the fanon. It’s all very healing. I’d say “let’s hug it out” but, dude, no chick-flick moments.