Tweetable Takeaway: This week’s “Supernatural” deliciously deconstructs itself before returning to the status quo.
Tweet

It’s time again for the adventures of Cain and Able Dean and Sam. I seem to recall one of the SUPERNATURAL producers promising me that Dean’s demonization was a problem that wouldn’t go away instantly. I suppose, by the series’ usual standards of resolving major issues within the first five seconds of a new season, three episodes until Winchester conflict resolution is a new record. But, man, that still seems unreasonably swift. 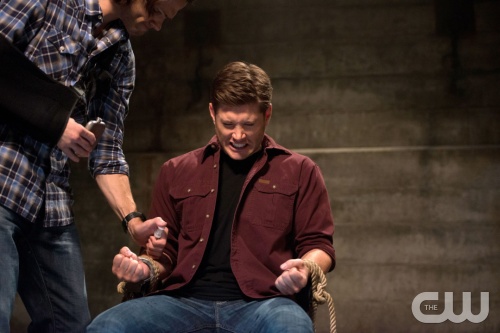 Sam spends the episode working a demon cure on Dean (that I completely forgot existed, oops) while Dean, in turn, deliciously deconstructs the basic conceits of the entire series. Supernatural has always been one to poke fun at itself–especially some of the more absurd elements. “What a load of crap it all is,” says Dean, referring to the moral code the brothers have always relied on to keep their world in order. It’s at its best, however, when it deliberately pokes holes in its own clichés. Personally, I was giddy that they finally called out John Winchester for being a terrible father. I like to call Supernatural‘s first season “the Manpain Show” entirely because of John Winchester’s crap. I won’t say I’ve been waiting ten years for Dean Winchester to revolt against his father’s legacy, but that’s only because I didn’t start watching the series until a few years ago. What’s also revealed in this pseudo-torture sequence is that Sam himself has been doing some morally reprehensible things. The man Dean killed last episode only sold his soul because Sam talked him into it so that he could find Crowley. I’ll admit that I’ve never much liked Sam until this very minute. He’s all right. Sometimes I just want to smack him. But whenever he’s bad–truly bad–that’s when I like him the most. “Which one of us is really a monster?” says Demon!Dean. And with Dean only killing the wicked and harmful, which one, indeed? Best of all, the show goes out of its way yet again to resolutely establish that Dean is still Dean, and that he hasn’t been hollowed out by a demon or something. He’s actually Dean, but free of guilt, and free of Winchester baggage. Dean free of Winchester baggage–even if he is a demon–let’s be real: it’s nice to see.

Crowley is bored out of his mind running Hell, with some hilarious breakup flashbacks to his recent jaunt with Dean. Hannah and Cas continue on their angel road trip, Cas attempting to get to the Winchesters’ Bat Cave to help out with the demon cure. I fretted for a while that Hannah had fandom crosshairs lining up on her forehead because of her obvious affection for Cas (I was serious when I said before that every woman is slated for the chopping block), but Castiel took pains to basically tell her to keep her crush under control because it was distracting from “the mission.” The crazy angel Cas let go last week shows up (with a nice eye-burning-out callback to the olden days when angels were first introduced.) The crazy angel knocks out Cas, tortures Hannah, and is subsequently taken out by Crowley who always straddles the line between truly evil and charmingly sentimental. In this case, sentiment seems to win out as he steals the crazy angel’s grace and uses it to recharge and obviously ailing Castiel. I imagine, since Metatron made the point of telling us last week that Cas’s grace is still out there somewhere, that finding it is going to be a major part of the season. Crowley claims he needs Cas at full strength to rein in Dean. I never can quite tell if Crowley gives self-serving reasons to mask his sentimentality or if he’s truly a jerk. Probably both. 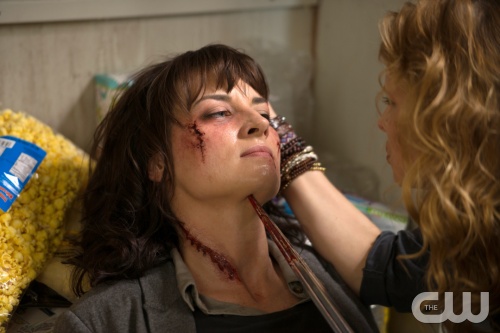 Dean gets free of his demon restraints and spends the rest of the episode stalking Sam through the halls of their headquarters in old school horror movie homages. (Although, if Dean Winchester were truly in his right mind he wouldn’t have missed out on the opportunity to shout “Here’s Johnny!” through that busted door.) Just as Dean is about to actually kill Sam, Cas finally makes it to the hideout and restrains him. Next we see, the demon cure has worked and Dean is back to his old self, which is obvious even in just the subtle facial expressions of Ackles who, let’s face it, was having way too much fun playing bad. (And I had too much fun watching. Incidentally, this episode was also directed by Ackles.) Sam goes on a junk food run so that Cas and Dean can have a quiet moment (which I can only imagine is calculated to send the fandom’s shippers to the ER.) Cas’s advice? “Take some time off.” Castiel might keep emulating humans, but he still hasn’t learned that saying “things are quiet” is a huge jinx. Whoever the new evil lady is, however, I’m not that interested. As always, the best part remains the emotional issues of the completely unhinged Winchester brothers, and teasing a new Big Bad without reference to whatever mythology is building just doesn’t grab me. I’ll wait and see.

Overall, I found it refreshing to see Sam and Dean actually at odds which rarely if ever happens. I loved that the series blessedly continues to keep its own metaphysics working perfectly–especially after some of the mythology slips last season. If there’s one thing above all else that I love about Supernatural it’s that they keep the rules of their universe incredibly consistent. Even when they retroactively adjust the continuity they do it so well that they tend to make it better in retrospect. So far, season 10 has pulled bits and references from the entire series mythology, and they’ve done it well. While I’d still love for season finale twists to take a reasonable amount of time to resolve, the main draw really is the Winchester brothers together. So I guess three episodes of them apart (rather than the literally five seconds we’ve had before on numerous occasions) was enough of a welcome change without being too much of a risk on their part.