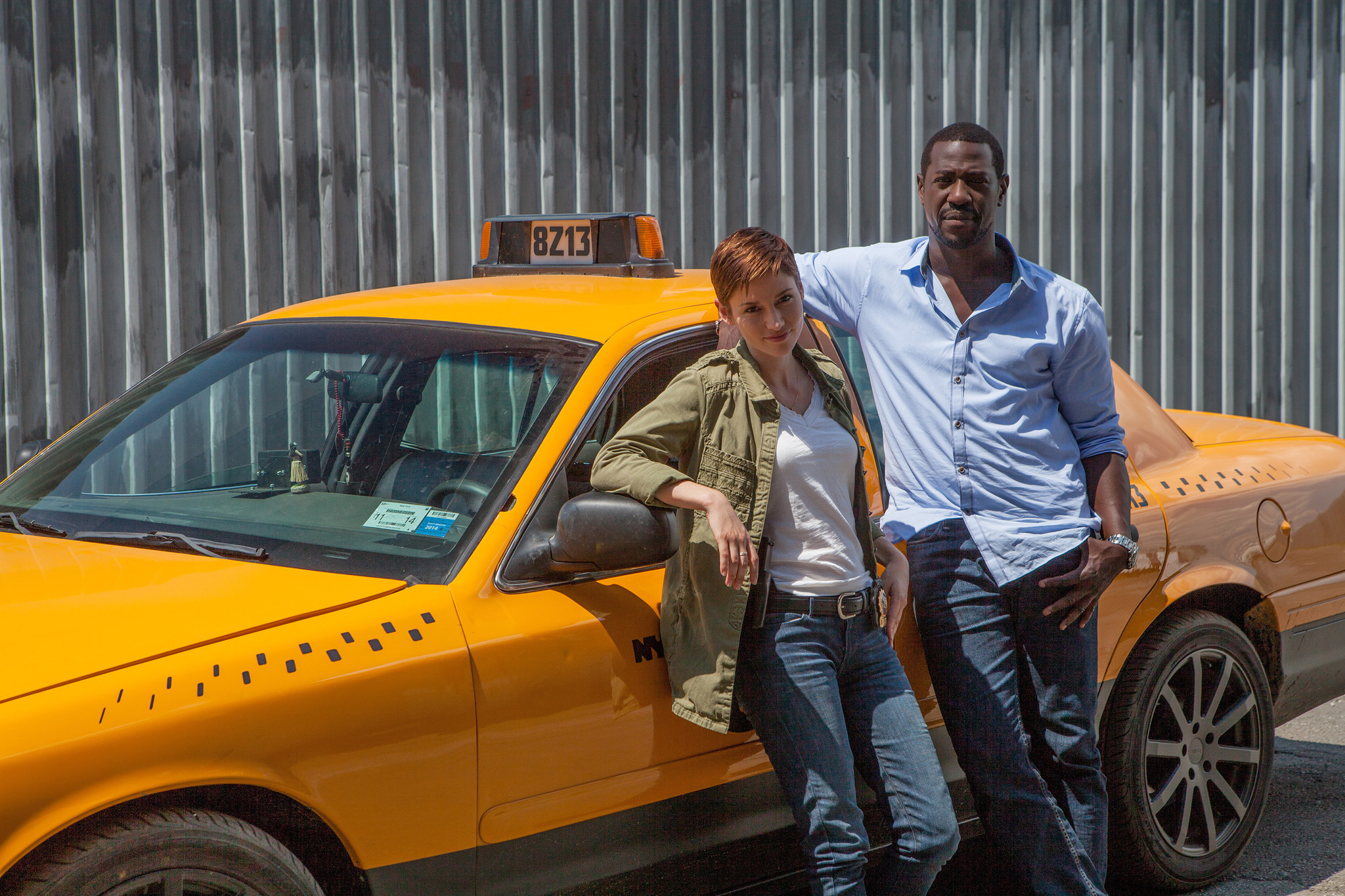 Well, they may have thought at one point that Leo was just a hinderance, but now it seems they know he is useful. All of the detectives, as well as their captain, are in his cab as we start the episode. I liked this small touch that tells us that he is slowly being integrated and accepted into the team.

…but they still make Leo stay by the cab. Rightfully so, as they are trying to stop a bomb on a rooftop. The bomb gets dropped off the roof, and suddenly it’s Leo who is in danger. He drives his cab and manages to catch the egg-bomb (in a move that seems almost impossible…don’t drop it Leo!)

Flashback: We have Leo narrating the story, taking us back in time to where this all began.

So we begin at the start of the case. Leo and Kat come across a dead body that is not so dead. A zombie, if I may. Of course Kat doesn’t believe in zombies, but Leo sure does as they start in a car chase with the undead. Kat chases after him, as he spits out blood. I really enjoyed Leo talking about not touching the victim or the blood, and to call the White House. Great comedic relief.

What is happening at 6:45? Apparently the zombie-man has predicted the death of all humanity. And the plot thickens!

The Zombie Apocalypse: Although they are all checked out, Leo wants to resign his consultant position, because he doesn’t do the apocalypse. Too bad, he is stuck with the team now. Kat keeps up her disbelief in all of the things Leo believes. He can’t be right, right?

Apparently, Leo might be right. The victim has a toxin in his system – a biological weapon. An act of terrorism, or is Leo right, and should we be running for the hills?

This episode has the right amount of comedic relief and suspense as we sift through exactly what is going on.

Once again Leo is put on driving duty around the city as we try and figure out what is going on. Also, he drives better than the rest of the team, which they of course disagree with, but it might be right.

They make Leo stay outside when they go to the first location. Kat asks him to check on her mother if anything happens, and Esposito gives Leo his phone with his parents number. This is serious business, and makes me happy I didn’t pursue a career as a cop (and respect all of the people that do! Scary business!).

They find a suspect who ends up on the run, and of course, in Leo’s taxi. Leo takes him for a ride, and they end up arresting him. Leo really IS useful, they have to admit.

Their suspect, a religious fanatic, is, as Leo says, ‘spooky.’ He truly believes that an apocalypse is coming.

A Romeo and Juliet tale: One of the suspects is unhappy with his sister marrying an American, which disgraces the family since she had an arranged marriage and meant to go to Iran. She refuses, and her brother lashes out.

At the wedding we get back to where we were at the beginning with Leo saving the day. Although he is excited, he sees Kat leaving with her boyfriend, obviously not as excited about the zombie apocalypse and ending on somewhat of a sad tone.

This episode was a bit of comic relief compared to a few of the others we have been having, and a nice change, I thought! What did you think of this weeks episode of TAXI BROOKLYN?

Kaila is living in Los Angeles, doing yoga on the beach often, writing for film and TV, and working hard in an industry she is passionate about.