With the TV landscape currently finding itself overrun with spin-offs, reboots and adaptations, TB Talks TV decided to take a look at spin-off series from days past. From the good to the bad to the just plain weird, one thing is obvious – spin-offs are a crapshoot…or are they? We’ll investigate what makes the good ones work, the bad ones fail and how all the others fall into place.

So what exactly makes a good spin-off series good? Well, let’s take a look at FRASIER as an example. On the surface, a series following a very pretentious West Coast radio psychologist on his various exploits and conquests doesn’t exactly sell itself. But if you take a character from a beloved and long running series, move him across the country, and give him something realistic enough to do, you’ve got a hit show on your hands. On Cheers, Frasier was meant to have a short arc as Diane’s love interest but as time went on, it became clear that Kelsey Grammer’s performance was not to be ignored, and after the series ended Grammer’s Frasier made his way cross-country to his hometown of Seattle to start again. And audiences followed.  The show ran for eleven seasons – a hefty run by anyone’s standards – and ended up amassing 37 Emmy Awards by the time it took its final bow.

Going back a little further, LAVERNE & SHIRLEY was a spin-off (technically a double spin-off) of Happy Days where the duo entered into the picture as dates for Richie and Fonzie. Unlike Frasier, Laverne and Shirley weren’t regular characters on the show when they got their own series. Also unlike Frasier, both Laverne and Shirley would continue to appear on Happy Days and vice versa – the Happy Days characters frequently appeared on Laverne & Shirley. (Not entirely unlike the way the cast of The CW’s Arrow and The Flash are setting up a precedence for multi-episode crossovers.)  Happy Days, itself a spin-off of an episode of Love, American Style, spawned two successful spin-offs – Laverne & Shirley and Mork & Mindy, as well as three unsuccessful ones – Blansky’s Beauties, Out of the Blue, and Joanie Loves Chachi. (Joanie’s love for Chachi couldn’t keep the ratings up.)

So what happened? What the successful series did that the unsuccessful ones failed to is that they had a reason for being separate from that of the original series. Each series had an original voice and a purpose that the duds never did. Plus, they didn’t have the same major characters everyone had already come to know and love — they used minor or secondary characters that audiences weren’t terribly eager to welcome into their living rooms or their pre-DVR viewing schedules.

Speaking of well known characters, JOEY (yes, Joey from Friends) took a well loved (or overextended) character and gave him his own series. The problem with Joey was that although he was a great character in an ensemble, Joey Tribbiani was neither strong enough nor interesting enough to carry an entire series on his own. The jokes about him being a bit dim were already tired before the series even started and the premise just couldn’t hold up to scrutiny. And let’s face it — without Chandler, Joey doesn’t really work.  Sometimes a secondary character stays on the sidelines for a reason.  Matt LeBlanc eventually recovered though.  His Showtime series Episodes earned him a Golden Globe win and three Emmy nominations.

Sometimes, spin-offs are so mind-bogglingly unsuccessful that they threaten the very integrity of their fictional universe. Such was the case with ABC Family’s RAVENSWOOD, a spin-off of their flagship Pretty Little Liars. Ravenswood followed one of the Liars’ boyfriends, Caleb, as he ventured to a new town full of new mysteries. Unfortunately, the mysteries in Caleb’s new town were magical in nature, while the mysteries in Pretty Little Liars were not. That’s not necessarily a problem in and of itself — as we’ve mentioned, good spin-offs can introduce sci-fi/fantasy elements to the parent show’s mundane universe. But Ravenswood was not, alas, a good spin-off. Caleb, who was enormously popular on Pretty Little Liars, had to be broken up with his girlfriend Hanna to make the move, which turned out to be a hugely unpopular choice; the other characters on Ravenswood didn’t have anything close to the charisma or complexity of Caleb or his fellow Pretty Little Liars characters; and the mystery, though magical, was kind of bland. After a season of bad ratings, Ravenswood was cancelled, and that’s where the magic became problematic. ABC Family didn’t want to lose Caleb, a popular character, so he was written back into Pretty Little Liars. His return necessitated some kind of explanation for where he’d been, which meant that to establish any kind of emotional intimacy between him and Hanna, he had to tell her about the magic. And while magic was all well and good when it was cordoned off into the Ravenswood corner of the universe, it absolutely doesn’t work on Pretty Little Liars. It’s a good thing that PLL is pretty loose about its continuity, or there could’ve been real trouble — and all because of a bad spin-off.

Some spin-offs simply can’t be categorized into “good” or “bad.” They transcend labels; they seem to transcend narrative itself. There are definitely non spin-offs that have this quality, but for some reason it seems more common among derivative shows, as if the desire to distinguish themselves from their predecessors sends them spiraling into uncharted no-man’s-land — the “Here There Be Dragons” area on the map of television.

The two most successful examples of this kind of spin-off are ANGEL and TORCHWOOD, which spun off from Buffy the Vampire Slayer and Doctor Who, respectively. Buffy and Doctor Who are pretty strange shows themselves, so maybe it’s not surprising that their progeny were even weirder. Torchwood went darker and edgier than Doctor Who, with lots of sex and violence and swearing. It was a baffling, uneven, randomly compelling show. It took the charming omnisexual con man Jack Harkness and turned him into a brooding immortal, who was by turns chilling in his callousness, heartwarming in his compassion, and deeply unsettling in his Messianic complex. It gave him a group of the most unlikeable, incompetent employees ever assembled by a secret organization, colored them in and fleshed them out in fits and starts until you found yourself, against all odds, attached to them, and then killed them off as soon as you started to look forward to seeing them. It had a kind of strange morality; the characters learned lessons at the end of most episodes, but not the kind of lessons that most people would agree with. Torchwood‘s peculiar mixture of whimsy, grimness, overblown stakes, fitfully coherent and compelling characterizations, and the occasionally genuinely and deeply affecting moment was unlike anything on TV before or since — including Doctor Who.

Angel, for its part, started out normal enough. It was a pretty bog-standard paranormal procedural (though, granted, in a time before paranormal procedurals were bog-standard), right up until season two, when Angel’s vampire ex-girlfriend Darla shows up pregnant with his baby. With the introduction of Angel’s son Connor, all bets were off. Characters went insane. They turned evil. They betrayed each other and were exiled and then somehow ended up friends again. They got sucked into alternate dimensions and spat back out aged by a decade, or without their memories. Everything that ever happened on Angel and Buffy turned out to have been orchestrated by an evil god so that she could possess Cordelia in order to give birth to herself. There was a giant talking cheeseburger that made prophecies. Buffy may have had an episode without dialogue, but Angel had a giant talking prophetic cheeseburger. And yet somehow, it kind of worked. It would be going too far to call seasons three and four of Angel good television — there were far too many questionable, confusing, and downright aggravating decisions for that — but it is, against all odds, extremely enjoyable television. There’s a kind of frenzied momentum that builds up out of all the madness, and the same chaotic decision-making that gave us the evil god conspiracy also gave us things like the romance between Wesley and Lilah, an unexpected, strange and twisted, but utterly fascinating relationship that never would have happened on a more “normal” show. 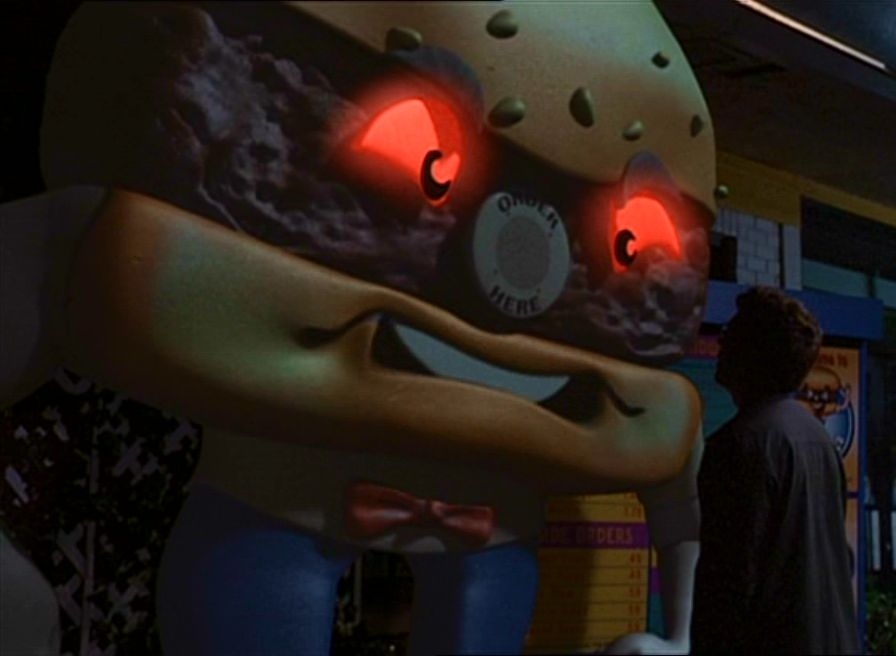 The picture doesn’t do it justice. Trust us, it’s bizarre.

For better or for worse — and sometimes both at once — Angel and Torchwood forged their own paths. They went beyond being distinct from their parent shows, beyond having an original voice and a reason for being. They went so far beyond it, in fact, that they ended up in unknown waters. But at least they were what very few spin-offs manage to be: unique.

So what’s in store for the future? Well, Boy Meets World has been successfully (so far) spun-off into Girl Meets World over twenty years after it’s original airing. The Flash is the most recent spin-off of the CW’s amazingly popular Arrow series.  And it’s off to the solid start.  The premiere of The Flash raked in 4.5 million viewers and a 1.8 in the 18-49 demographic, giving it the highest rated premiere for the The CW since The Vampire Diaries.  We’ll have to wait and see if the series lives up to this bar.  And we all know how hard it is to beat out vampires. And, of course, the spin-off we’ve all been anxiously waiting for – Better Call Saul, the prequel to Vince Gilligan’s Breaking Bad. Odds are they won’t all last but even if they go the way of the Joeys of the past, they’ll still hold a special place in our hearts, if not our DVRs.