Everyone’s got daddy issues this week on THE KNICK. This episode was one of the more Bertie-centric episodes. Well, as much as any episode all about Thackery can be. We start the night off with Thackery calling Bertie into The Knick with an emergency, which Bertie rushes over to assist with, much to the dismay of his father. Once there, Thackery is clearly high and manic while he excitedly explains to Bertie that he’s been working on a procedure for the placenta previa problem they’ve been working on for months. He hasn’t slept in more than 2 days and he’s been testing his theories on two prostitutes who happen to be patiently waiting…in the nude. 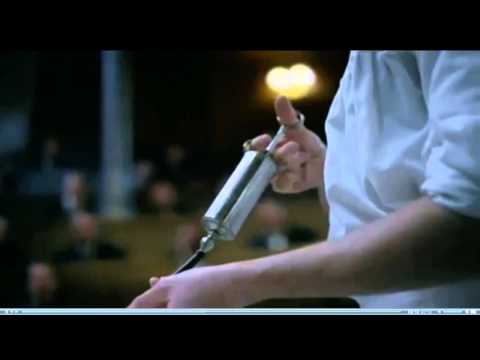 It’s such a weird scene that feels more like a dream sequence than something that could plausibly occur, but with Thackery, anything goes. After waiting for Bertie to wake up for a number of minutes, I realized that no, neither Bertie nor Thackery are dreaming. All those drugs must be good for Thackery’s brain because he’s fashioned a rubber balloon to pump up in the bladder, staunching the bleeding while they try to save the patient. Of course, they need a real pregnant woman to test it on but for now the hookers are doing quite nicely. It’s here that we realize that Thackery is filling in for Bertie’s father. Not only does he respect Bertie, his ideas, and his profession, but he’s excited about medicine in precisely the same way Bertie is. He’s smart, driven, talented – everything Bertie’s looking for in a role model and the best part is, Thackery seems to like Bertie much more than his own father does. When Bertie’s minor tweak sends Thackery through the roof (in a good way), Bertie gets the praise and recognition he’s been starved for at home.

On a much sadder note, Gallinger’s baby succumbed to typhoid fever and after taking their one and only family photo, Gallinger and his wife hold vigil for their daughter. Harriet the nun shows up to offer condolences but is asked instead to pray for the baby’s swift recovery. Gallinger’s wife is in denial about the baby’s death, so Sister Harriet suggests Gallinger consider taking in the abandoned baby who was left on the church steps. This is our second example of the episode of surrogate fathers. Gallinger is resistant to the idea, but you can be sure this isn’t the last we’ve heard of this suggestion. Outside, Cleary picks up Sister Harriet for another “job” and after she performs the abortion, Harriet admits that she’s torn between what she thinks is right for the mothers of these unwanted children and what the church says is right. We also get a bit of background about Cleary who grew up in an orphanage surrounded by strict and violent nuns, another sort of surrogate family. Although he never felt at home there, the nuns were all the family he had and in a way his working with Harriet could be his way of seeking approval and acceptance from someone he views as a superior.

Meanwhile, Barrow buys a used x-ray machine and promptly sits for an hour so the machine can examine his head. Yeah, so radiation’s a thing… Anyway, not much to do with the rest of the episode but, again, count on coming back to this plot thread. We also get a glimpse of the burgeoning pharmaceutical business when the x-ray salesman tries to get Thackery to peddle a special ointment, which Thackery refuses outright even after the promise of fame and fortune has been dangled in front of his face.

No one rises so high to fall so far this episode as Cornelia. During her investigation with Health Inspector Spade, they realize that one nomadic cook has been spreading typhoid throughout the community – Typhoid Mary. They track her down and when she refuses to come along peacefully, Cornelia literally tackles her to the ground. After a long overdue heart-to-heart with Dr. Edwards about their childhood escapades, Cornelia goes home to find her father, fiancé and future father-in-law at a game of cards. It’s clear from her expressions that Cornelia isn’t too keen on the idea of ending her career after she gets married but it’s just as clear that her fiancé expects her to stop once she gets a ring on that finger. While she’s getting ready for bed and halfway undressed, her future father-in-law comes in and creepily suggests she “start calling him dad.” Even though he doesn’t actually do anything outfight, it’s clear where he expects the situation to go and it’s anything but friendly.

Bertie and nurse Elkins finally get their date and although it’s clear that nurse Elkins is fond of Bertie, when they start talking about Thackery, you know her heart lies elsewhere. It’s the same (or nearly so) for Bertie. They wax poetic about Thackery and while each one admires and loves Thackery, it’s in two very different ways.

Poor Dr. Edwards has been under a lot of stress lately, so he gets drunk at a bar and picks a fight. It’s his release in the same way Thackery uses cocaine; each is dangerous to the user and those around them. Later on, Thackery is staying late to finish working on the paper he and Bertie are writing about the now successful Christiansen-Thackery-Chickering Placental Repair, which had it’s first successful application. He hears something downstairs and bursts into Dr. Edwards’ secret clinic. At first he’s upset and demands the clinic be shut down. He goes as far as firing Edwards until he finds out the impressive medical strides he’s been making in the clinic. Not only has he impressively modified a vacuum for suctioning, but he’s found a near foolproof procedure for fixing hernias. The entire scene plays out like a young son showing off his report card to a proud, if distant, father. Look dad, see what I can do. Edwards is no child, though. He knows just how to manipulate Thackery to get what he wants…and gets it. From now on, Edwards is an official part of the team and he and Thackery will partner on a paper for his hernia surgery so Edwards can get his name out there in a time when no African American doctors were being published in America.

Unlike most episodes, “Start Calling Me Dad” felt like a cohesive, logical progression of events. Aside from a few minor details, someone unfamiliar with the series could jump in at this point and not be too confused about what’s going on. And even though this week (like most weeks), the show centered on Thackery, this time it gave us a glimpse of how others view and interact with our hero (or anti-hero, as the case may be). We see how Thackery looks through the eyes of many of the characters, and more generally, how the scope of fatherhood and all its inherent issues (good and bad) play out in non-traditional settings. This episode is definitely one of the most solid so far, which is saying something with an amazing show like this one. We even get a bit of a history lesson with the x-ray and Typhoid Mary storylines. Next week’s episode “Get the Rope” sounds intriguing and I can’t wait to see what’s in store.