Tweetable Takeaway: There’s no telling how far the characters on “The Knick” will go to save the ones they love until they’re pushed to the brink.
Tweet

Airtime: Friday at 10pm on Cinemax
By: Rikki McKernan, Contributor

This week’s episode of THE KNICK is all about how far these characters will go for love. The episode starts off with a crash. Literally. Thackery is still jonesing for cocaine and has resorted to breaking and entering to get his fix. He breaks into a pharmacy and is about to shoot up when he gets busted by the cops. Of course Barrow and Robertson, his benefactor, smooth things over with the cops (read: bribe) but the problem’s not solved – Thackery is still going through withdrawals.

Thackery’s nighttime escapade has made it into the paper but under a slightly different version of reality where Thack was stealing drugs for his patients who are in need. At the Knick, Elkins, Edwards, and Bertie are all discussing the events and while Elkins knows it was Thackery, Bertie, always looking on the sunny side, is convinced it was someone else. Oh, Bertie. Anyway, Barrow gets drugs from his bookie but when Elkins goes to deliver them, finds out it’s just salt water. Seeing that Thackery’s really in need, Elkins goes one step further than Barrow, she visits the brothel/drug den to find the fix, bringing us to the title of the episode. The Golden Lotus is what they call a dainty foot and the owner of the brothel convinces Elkins to trade sexual favors with her Golden Lotus for opium and $100 cash. She gets the opium to Thackery but lies and says she sold her bike to get it.

Meanwhile, Cornelia is in the family way with Edwards’ child. Of course she’s terrified because she’s engaged to another man and, let’s face it, it’s not the most progressive of times. Edwards is overjoyed until Cornelia brings him back to reality, pointing out that there’s no way they can keep it. Obviously, it’ll have to be Edwards who performs the operation but when it comes down to it, he can’t bring himself to kill his own child. He wants to run away and raise the baby together but there’s literally no place on earth where that’s feasible. He refuses to do the abortion because he already loves his child with Cornelia too much and she can’t bring herself to keep the baby for the same reason.

Poor Dr. Gallinger (bet you never thought I’d say that) is greeted by his clearly mentally unstable wife at the hospital where she’s brought their new baby to be looked at. She tried to help but just managed to drown the baby without realizing it, making this the second child the couple has lost in as many months (possibly even weeks). There’s nothing Gallinger can do other than get his wife some psychiatric health. Unfortunately, in this time period the only way to do that is to have her committed and forcibly removed from their home in a straight jacket. It’s really heartbreaking because even as much as Gallinger is a prejudiced asshole, no one deserves what has happened to him and his family. His attempt to help his wife out of her misery has only served to end the life of another baby girl. 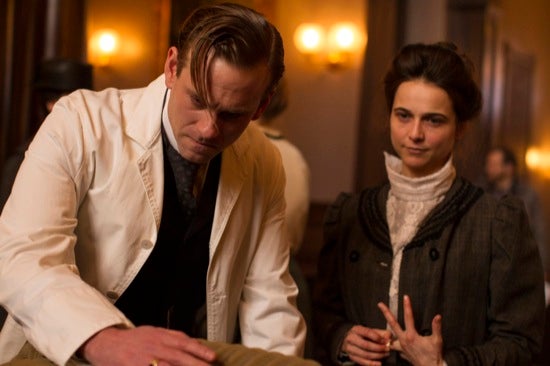 Our lonely little Bertie isn’t having the worst of days but he’s not doing to well, either. He’s clearly in denial about both Thackery and Elkins. He looks up to Thackery as a mentor and father figure and won’t accept the fact that he’s a drug addict going through withdrawal. He has a short moment with Elkins but their relationship is obviously one sided with Bertie ready to walk down the aisle and Elkins preoccupied with getting back to Thackery. Maybe that’s the real takeaway from this episode: a by product of love and affection is denial and no one’s immune.

Driven to extreme measures to save the man she loves, Elkins goes to the German hospital across town to steal the cocaine he so desperately needs, even going so far as to tell them her name is Thackery to cover up her crime. She gets caught but manages to get away with what looks like enough cocaine to kill an elephant. Elkins “doses” Thackery, which makes him very excited to say the least and they start going at it. When she suggests he dose his sex, he turns that tables and doses hers instead, leading her further and further down a road best not travelled. When the series began, Elkins was an innocent, naive nurse desperate for recognition and respect. What she’s become under Thackery’s tutelage is a prostitute, a thief, and a liar. This episode we finally realize that there’s nothing Elkins won’t do for Thackery and there’s nothing he won’t do for the drugs he loves.

Next week is the last episode of the freshman season of The Knick and now that we’ve dealt with all the daddy issues and denial floating around the hospital, expect tensions to rise to the breaking point. Just hope no one asks you to do the Golden Lotus between now and then.