Thursday afternoon saw a double dose of vampires (and more) with the back-to-back THE VAMPIRE DIARIES and TRUE BLOOD panels.

The “Vampire Diaries” panel opened with a hilarious video clip featuring two of the series’ stars: Ian Somerhalder and Kat Graham. The last season ended with Damon Salvatore (Somerhalder) and Bonnie Bennett (Graham) seemingly getting killed off the show, and the spoof clip gave the excited fans in Ballroom 20 just a little taste of why those characters might be meeting their maker.

Hint: dressing room size matters on the set of TVD.

This was the show’s 6th appearance at San Diego Comic Con and the packed room (which, let’s be honest, was mostly young and female, and there’s nothing wrong with that) showed their love of the cast as the panel members came out to thunderous applause. This year’s panel included stars Somerhalder, Graham, Paul Wesley (“Stefan Salvatore”), and Nina Dobrev (“Elena Gilbert”), as well as series co-creator/writer/Executive Producer Julie Plec. The fans were also treated to a surprise appearance by Matt Davis, who joined the panel after an “unexpected” question from the audience. Davis’ character, Alaric Saltzman, was killed off at the end of season 3, but, as announced by Plec, will be returning for the upcoming season. 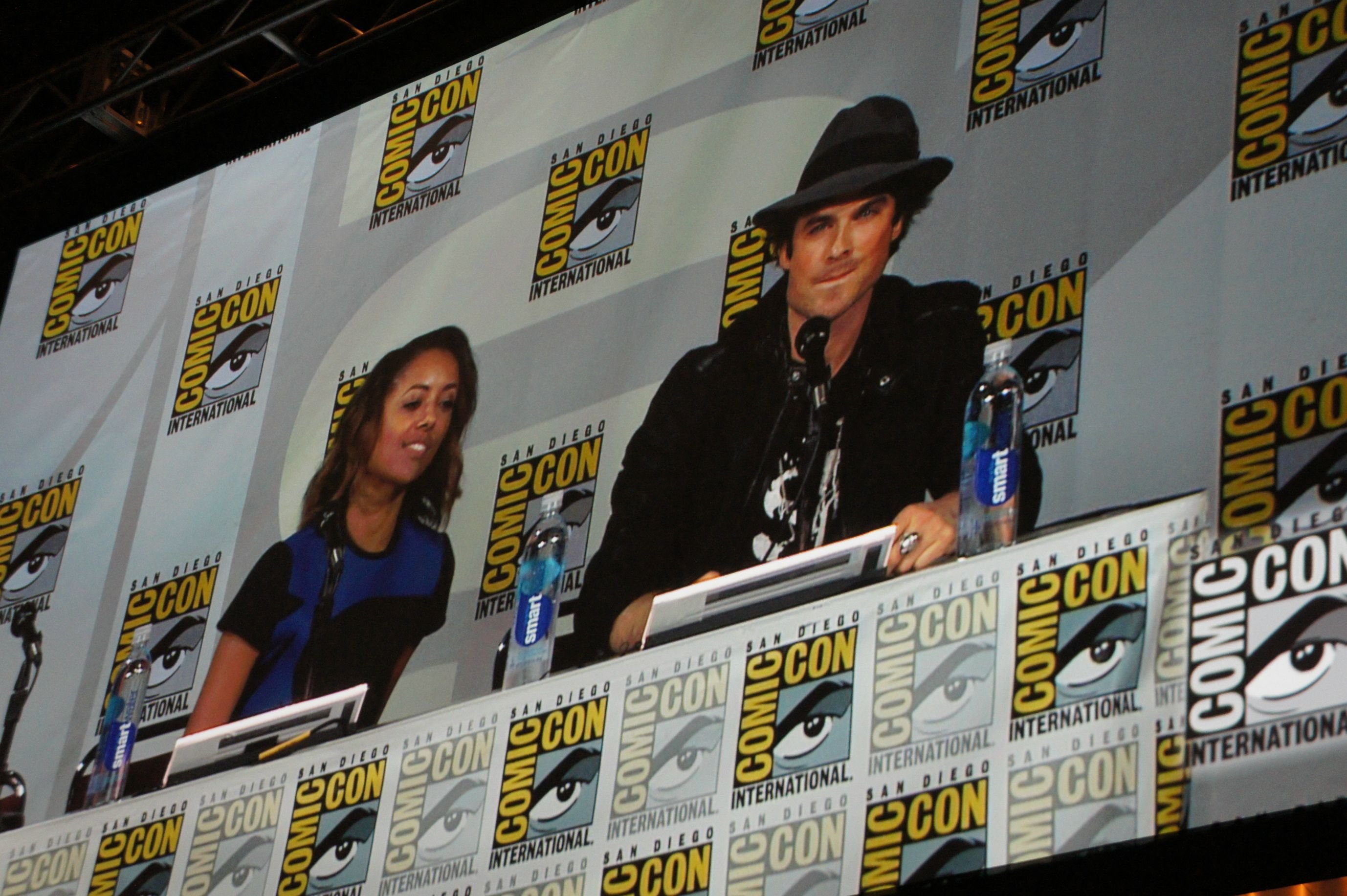 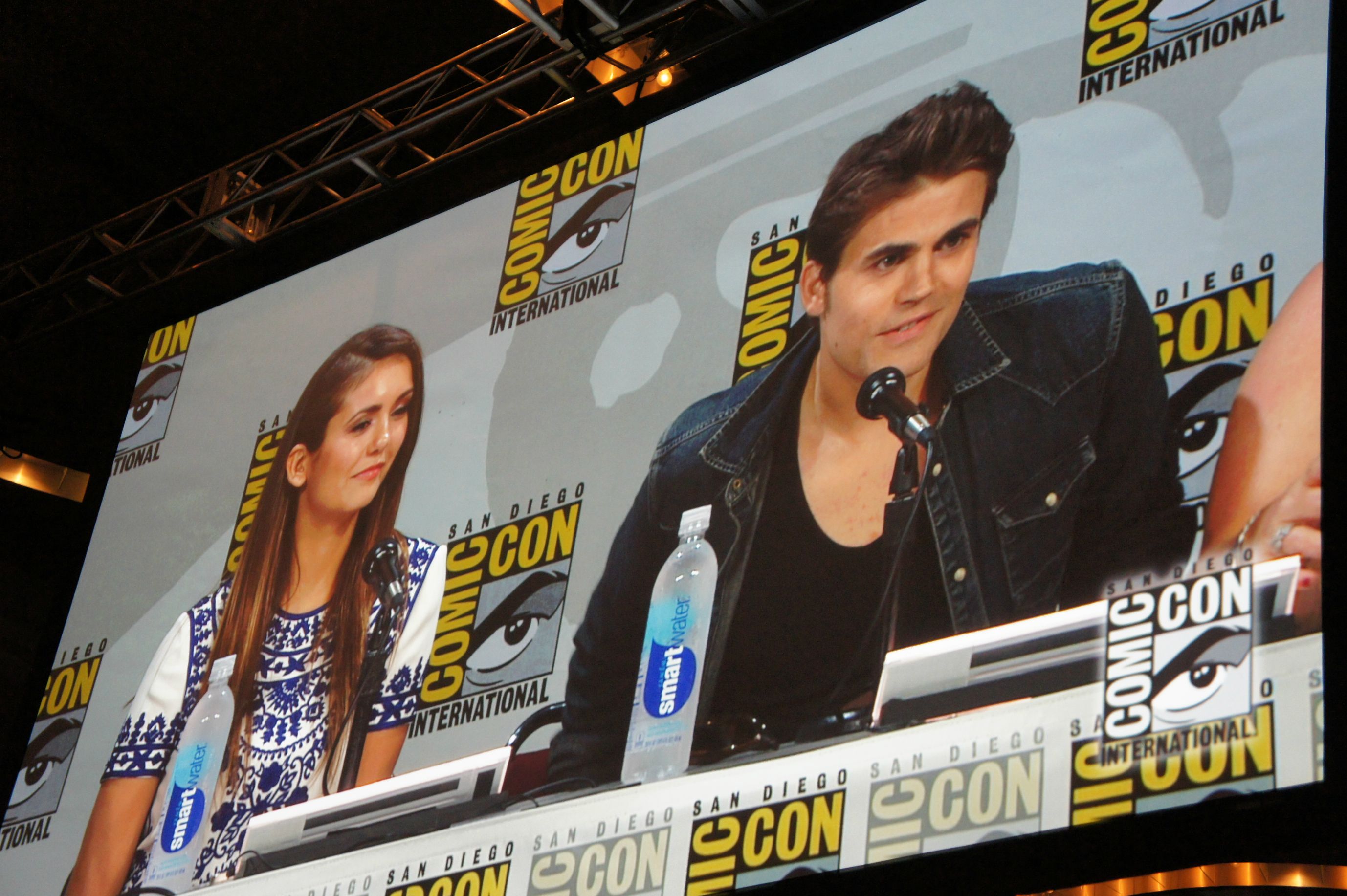 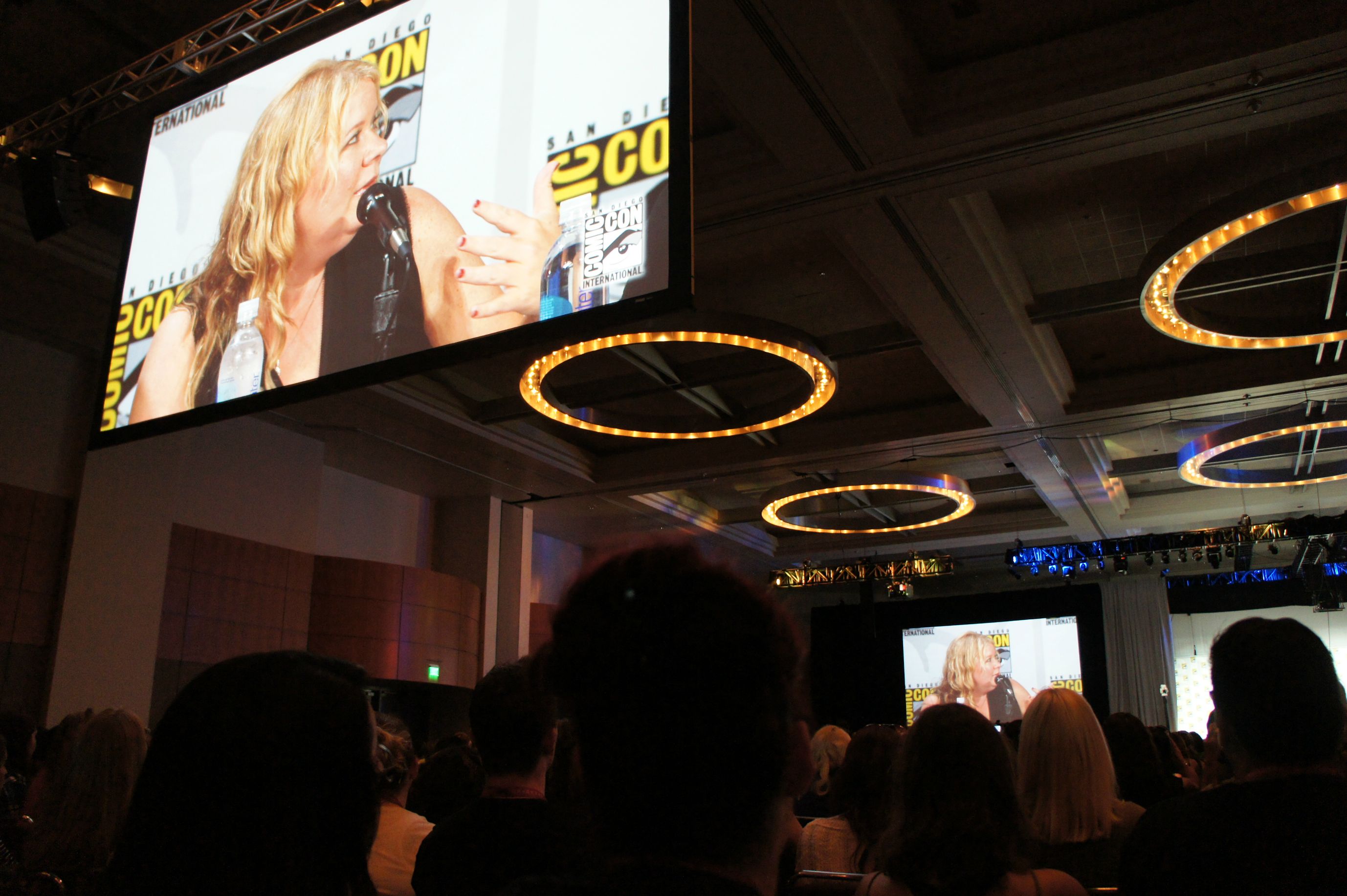 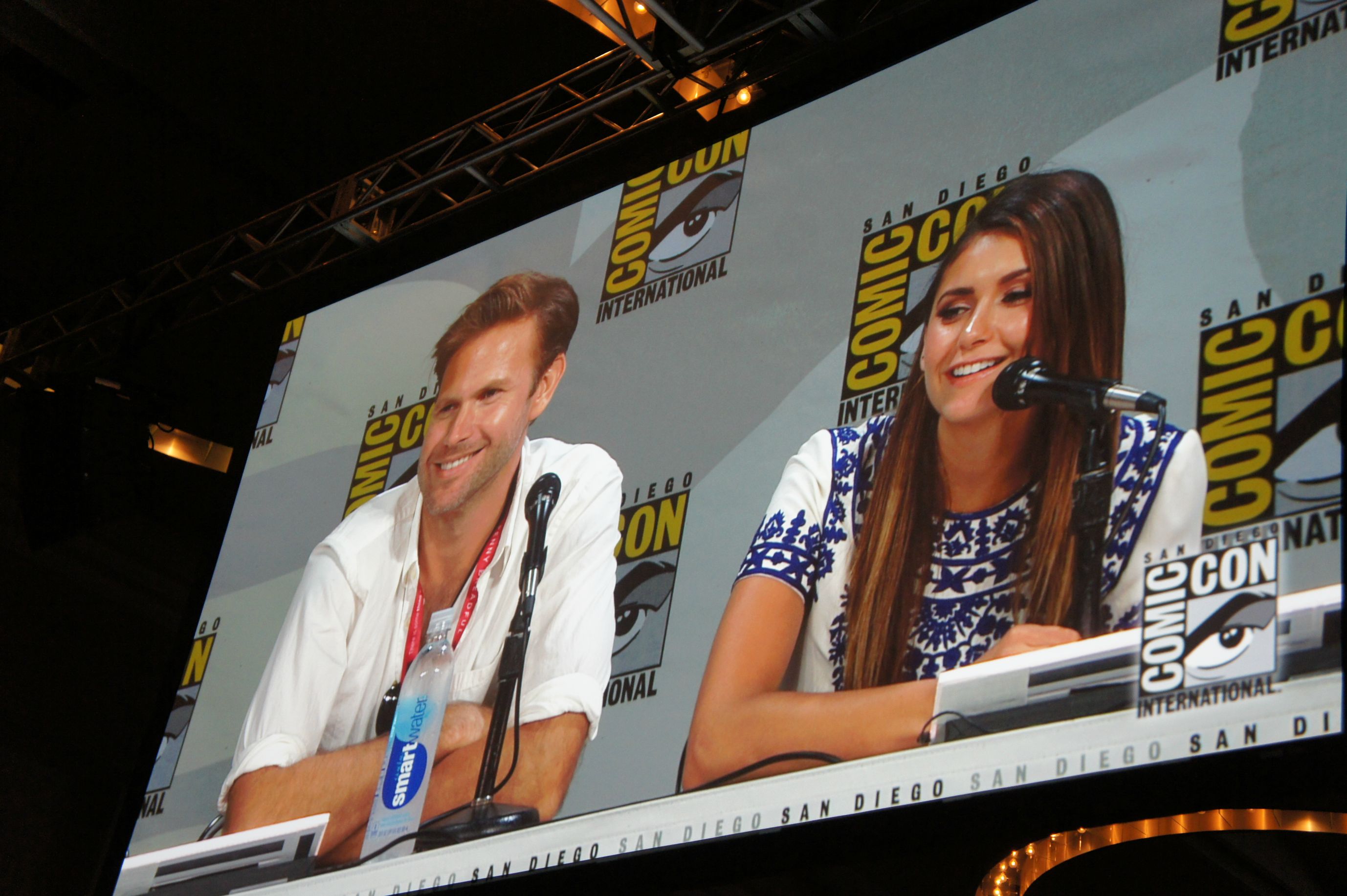 As with many of the panels for shows that have been on air for more than a few seasons, much of the panel discussion revolved around the sustained evolution of the characters and the show itself, from the beginning to where they are now. Somerhalder lauded the growth of his 160-year-old vampire character, saying that Damon couldn’t remain just a one-note bad guy throughout the life of the show. The actor was glad to see the other sides to his character – not just the killer, but also the man who is fiercely loyal to the people he cares about. Dobrev also spoke about the necessary changes that Elena has gone through from season one, especially now after she’s suffered such a massive loss with the apparent death of Damon. 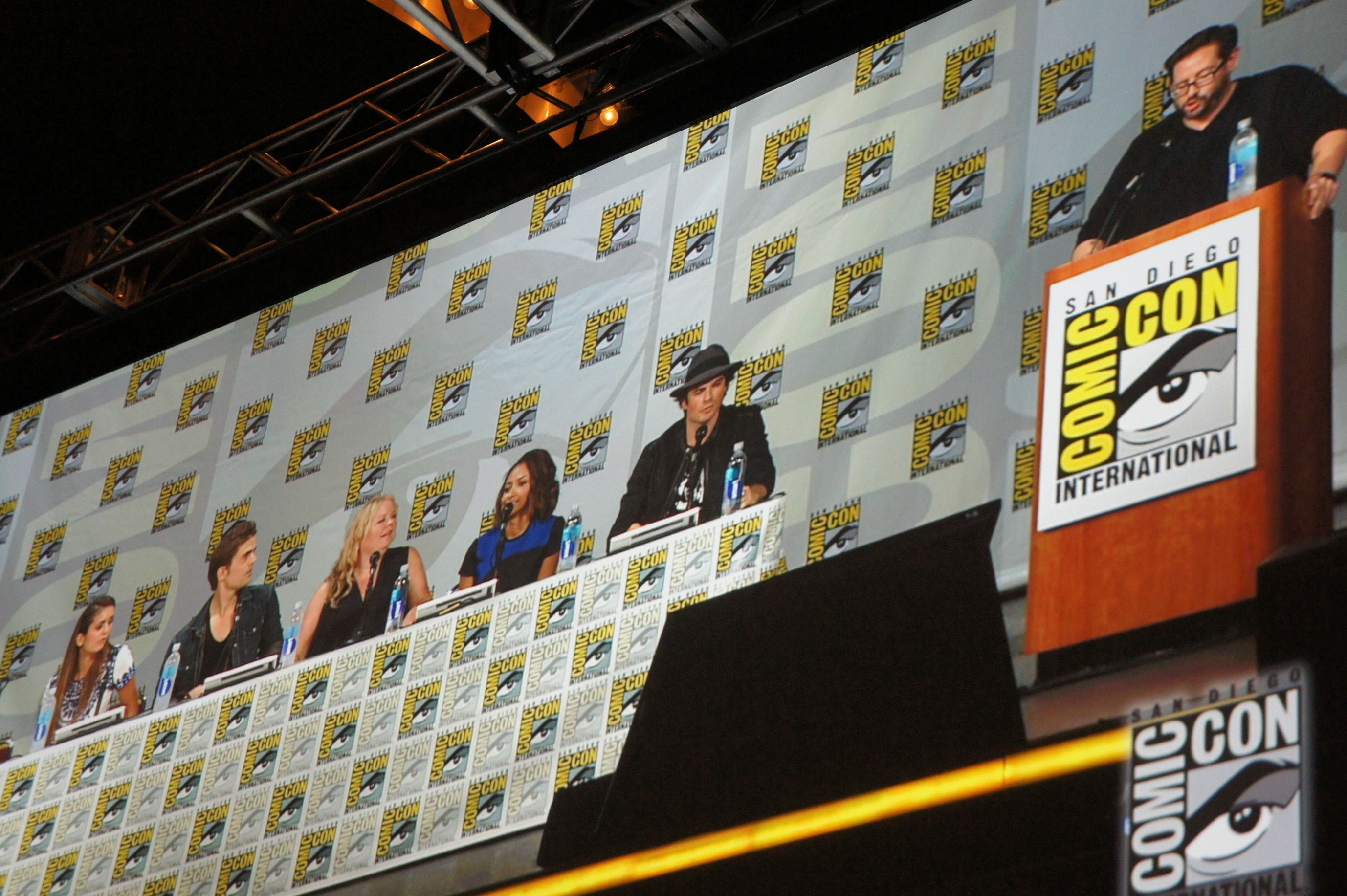 For the us, once again the small panel allowed for more in-depth answers from the cast present as well as deeper insight in their characters and the show. It was great to hear the actors expand on their relationships with the roles they inhabit day in and day out without resorting to 10 second sound bites. Somerhalder rightfully acknowledged that the romantic relationships on the show are really not the best examples for anyone watching. All things considered, neither Stefan nor Damon are actually good matches for Elena, and we have to agree with his proclamation of being on “Team Elena.” (We do have to say, the audience seemed a little on the young side to fully appreciate Somerhalder’s more R-rated jokes.) 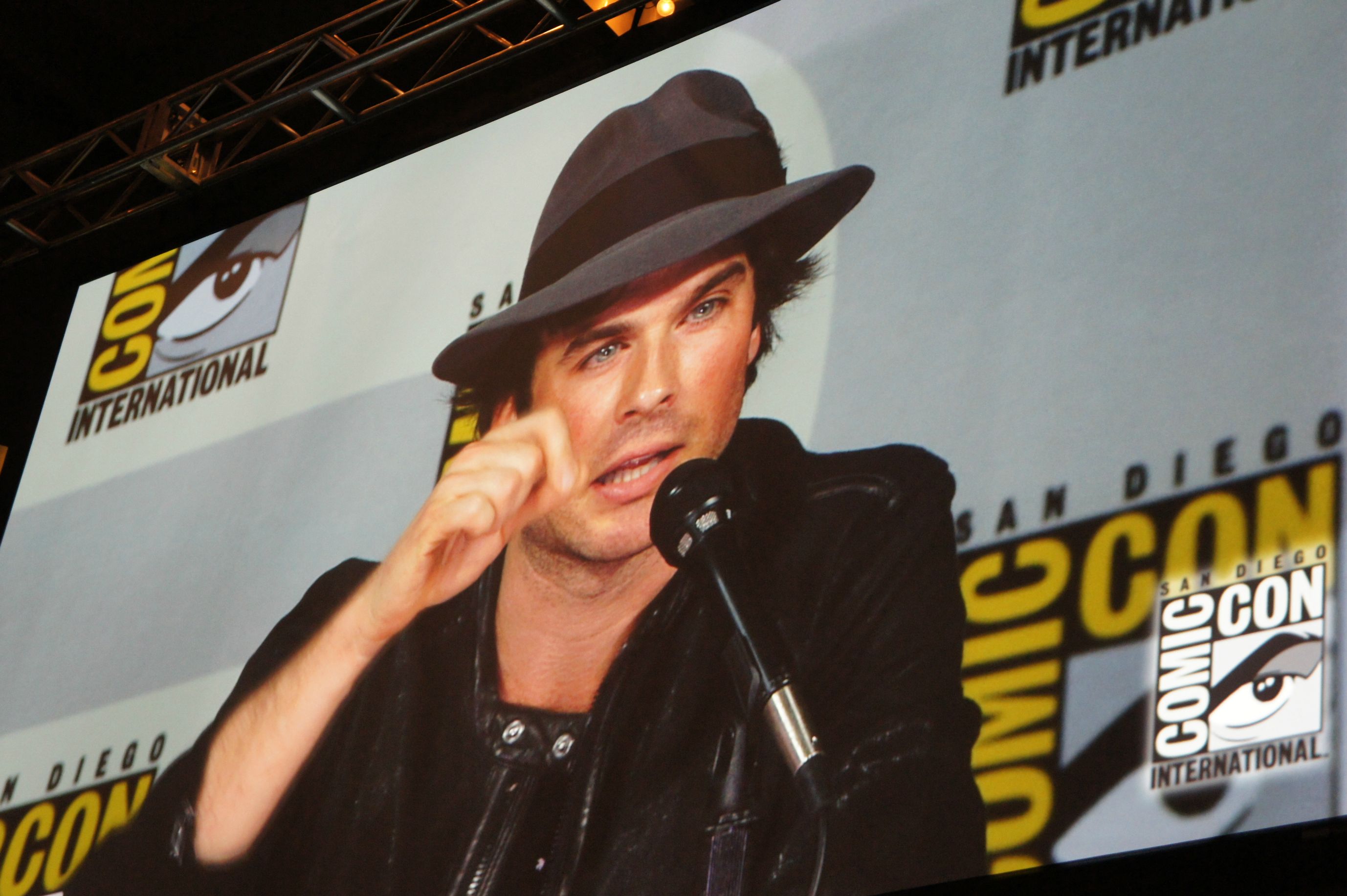 We also enjoyed hearing the perspective of the co-creator and writer of TVD, Julie Plec, who’s been with the show since step one. Plec revealed during the panel that the show would be making a four-month time jump from the events of the 5th season finale, which allows for the show to skip over the immediate grief of the situation and delve into the longer lasting effects.  From what we heard at the panel, the new season of the “Vampire Diaries” looks to be one the fans can get excited for, and if their screaming that echoed through Ballroom 20 is anything to go by, they already are.

Best Previously Unknown Talent: Somderhalder can, apparently, write in perfect cursive with his toes. He did not, however, demonstrate this talent.

The sixth season of “The Vampire Diaries” premieres Thursday, Oct. 2 at 8pm. on The CW.

Coming up, we’re heading over to Bon Temps one last time for “True Blood.”