Welcome to Day 2 of Comic Con 2014. It wasn’t quite as hot as it was yesterday, but we’re glad we’re not decked out in head-to-toe Spandex. Kudos to all the cosplayers in the center who are. Stay hydrated! Our first two panels of the day ended up actually being four panels. With a good bit of luck and an early start, we were able to get into Hall H for THE WALKING DEAD panel without having to sleep in the serpentine line all night. We snatched up two of the coveted wristbands and even got to hold the “End of the Line” sign for a little while. Then we settled in for a long, long…long wait. 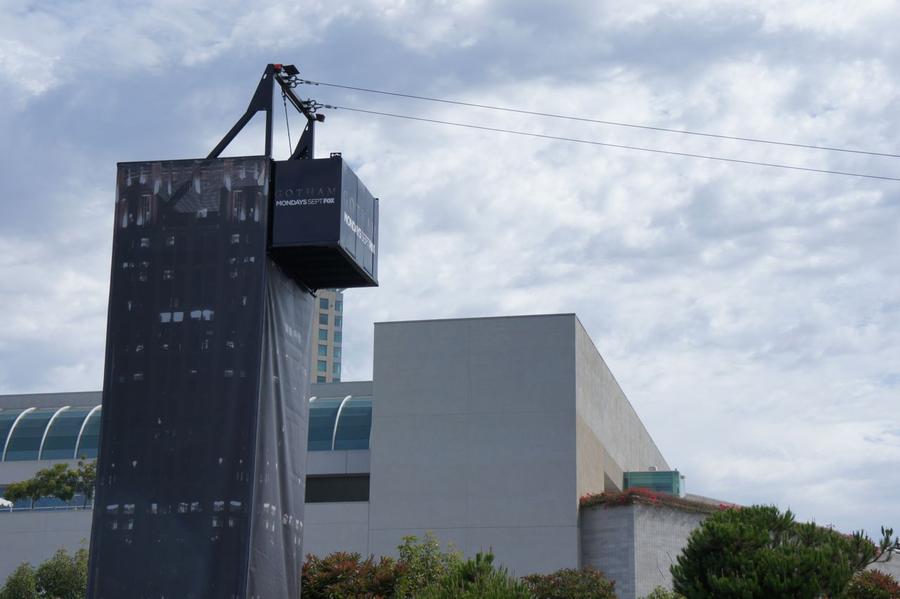 As we wound our way over, under and around the convention center, we were entertained by Fox’s “Gotham” zip line (which we may or may not be brave enough to try), an animatronic Godzilla with lifelike growling, and some awesome cosplay. (Also, if the owner of that lovely yacht parked out front wants to give us a tour…tweet us!)

Once we got in, we quickly made our way to some seats in the dark, as the first panel of the morning was showcasing a number of animated shorts. These amazing production, which ran the gamut between sad, quirky, and just plain strange, were a wonderful surprise to stumble upon. After that, the next mini-panel was a sneak peek of “The Last of Us,” a video game that is being adapted into a movie by the writer of the video game and Sam Raimi. Judging by the cheer that went up through the hall at the news, people are excited. We did hear an inkling that “Game of Thrones” star Maisie Williams took a coffee meeting to possibly get cast in the film, but Raimi was very clear that nothing has been confirmed yet, and won’t be for some time. He also let slip that he and his brother are writing an “Evil Dead” script for a TV series. So fans of that property have even more to look forward to. Raimi also received the Inkpot Award for his years of service and dedication to the industry.

And then it was time for the first of the two panels we were all there for – AMC’s “The Walking Dead.” Chris Hardwick, of “The Talking Dead,” moderated the panel that was full the brim with cast members, including Andrew Lincoln, Steven Yeun, Norman Reedus, and more. The hour opened with an answer to a very important question: Will Rick Grimes and his group ever get out that train car? And the answer is…well, you’re going to have to watch Season 5, just like we are. (One thing you learn quickly at Comic Con, or any convention, is that there is an awful lot the cast, writers, creators, and producers aren’t allowed to talk to. They take spoilers very, very seriously around here. 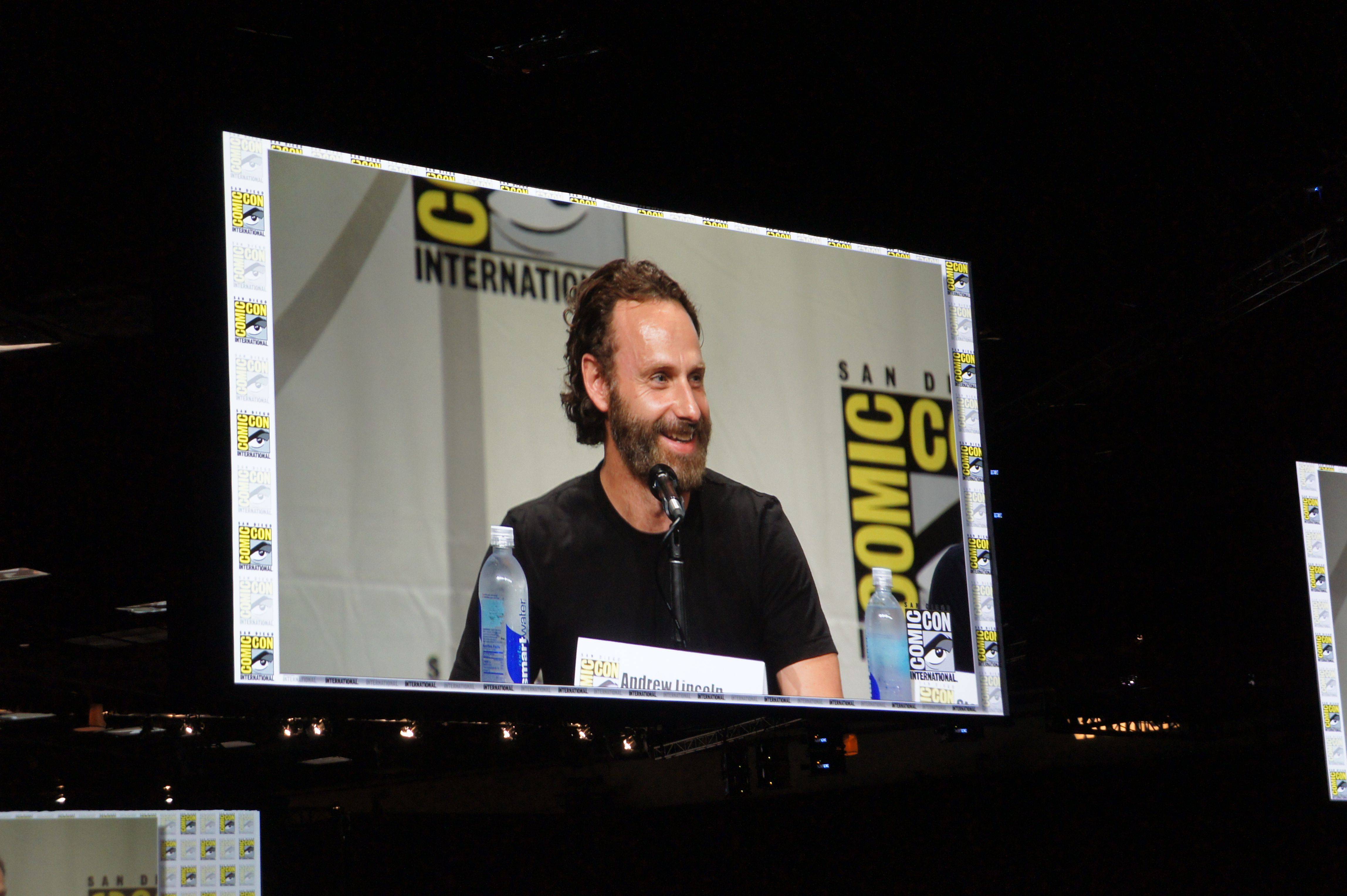 A big theme of the panel discussion was how the survivors have been affected by the events of the last seasons. And word seems to be that they can’t really come back from things they’ve done and been through. It’s really not surprising, considering what they’ve been through, ever since the initial infection and the first realizations that the world has completely changed. They’ve all been changed through their horrifying, heartbreaking experiences, and perhaps not necessarily for the better. The cast talked about the intense growth of the characters (well, those who are still alive), and, in the case of young Chandler Riggs, the physical changes as well. Riggs, who plays the young Carl Grimes, began the show when he was just a kid and has experienced a singular kind of growth amongst the cast. 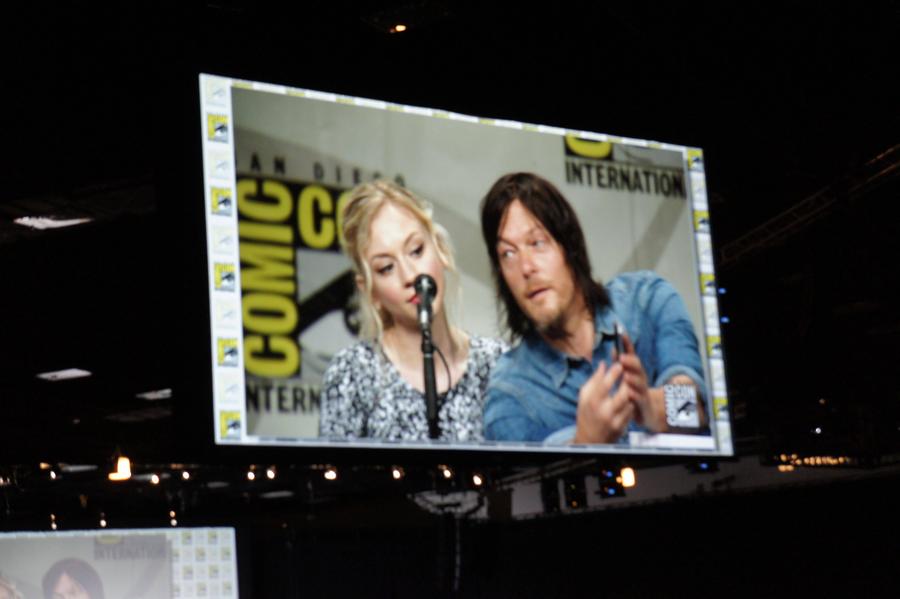 “The Walking Dead” graphic novel author Robert Kirkman was on hand alongside the Executive Producers, including David Alpert, Scott Gimple, and Gale Anne Hurd, to debut the new trailer for season 5. Kirkman hinted to the rapt audience the direction of the upcoming season, including delving deeper into the story of Terminus. Terminus is where we left off at the end of season four, and it was a location that was meant to be a “safe location” for any and all survivors. But if “The Walking Dead” has taught us anything, safe is an incredibly relative term. The trailer, which we got to see twice, makes it clear that the show is coming back with a bloody vengeance, and we’re stoked for it. We’re getting Rick back in a leadership role, as well as an appearance of a character that might have been thought lost. 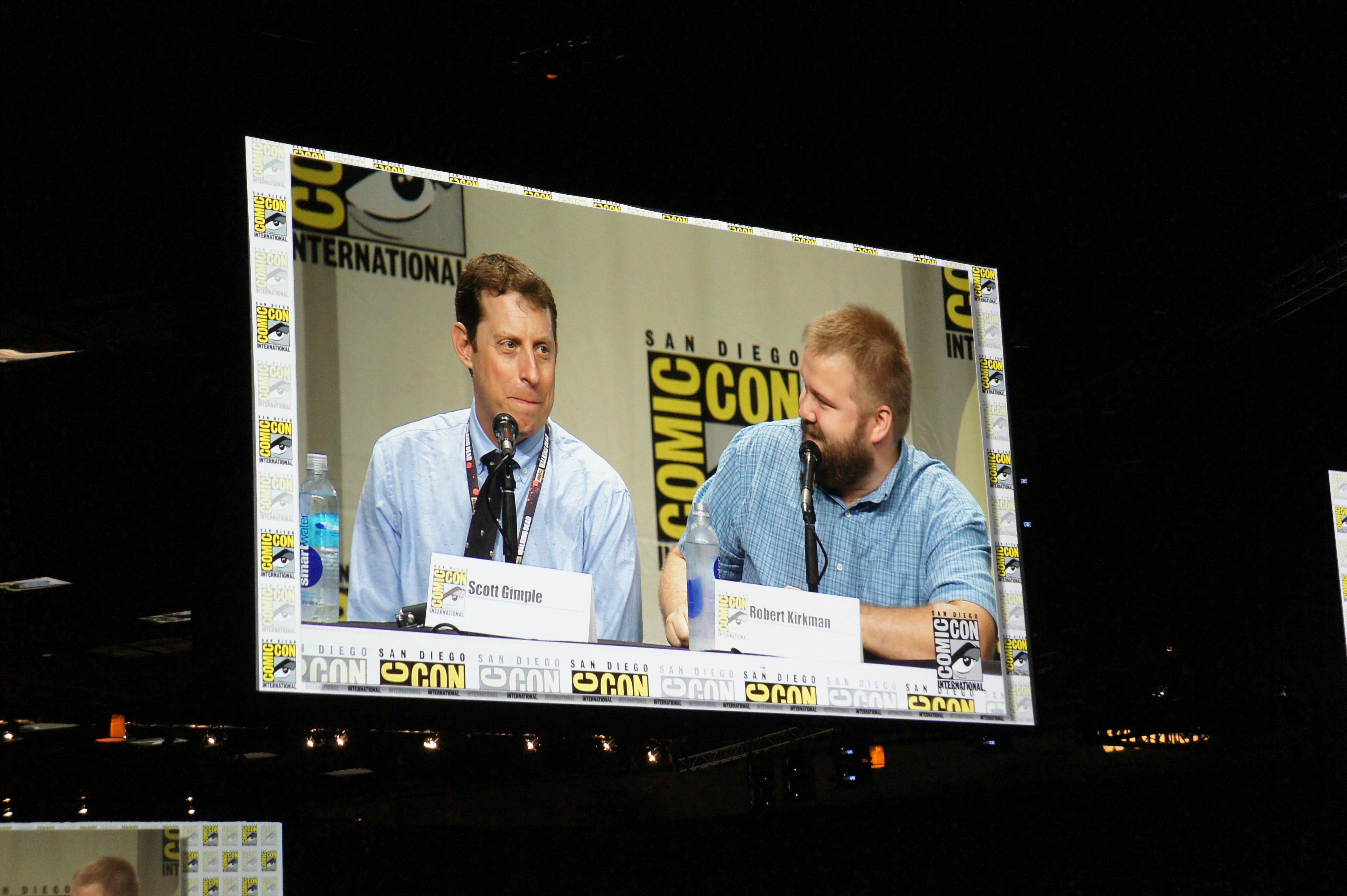 The best question from the audience Q&A came a newly infected Walker who wanted to know just what the cast was doing to raise awareness for the infected. There was no answer forthcoming. We hope that gentleman doesn’t end on the wrong side of a bullet or dagger any time soon. 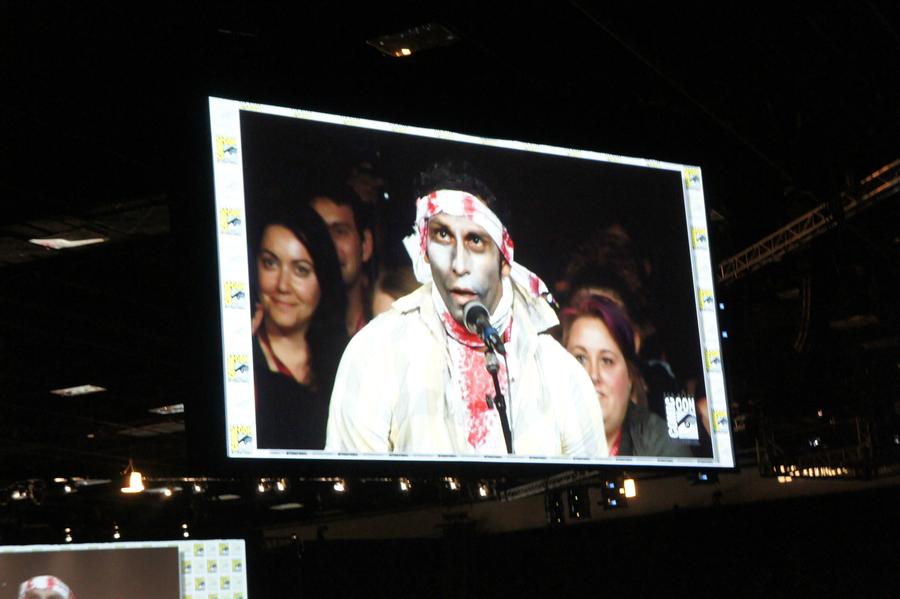 One of the infected.

Season 5 of “The Walking Dead” premieres October 12th at 9pm on AMC.

Next up is our coverage of HBO’s star-packed “Game of Thrones” panel.