Tweetable Takeaway: Politicians in the zombie apocalypse make sure troops returning to civilization have jobs.Tweet

Airtime: Sunday at 9pm on AMC

THE WALKING DEAD sends Team Rick into an extremely civilized gated community in “Remember,” a clever, suspenseful episode that plays as much like a “vets return home from war” story as any drama on the big or small screen. The main difference being that in this fictional zombie apocalypse, Deanna, the politician, makes sure there is a place to live and a job for those who have been fighting outside the protective gates.

The community seems to work great. They have solar power to provide electricity. They have running water to take showers, and the other residents are tolerant and accepting, with only a few exceptions. Everyone adjusts to this Stepford Complex at different speeds. Rick cuts off his beard and a really nice neighbor lady gives him a haircut. Carol, plays this “what, little ol’ me” shtick to perfection as they all turn in their firearms. 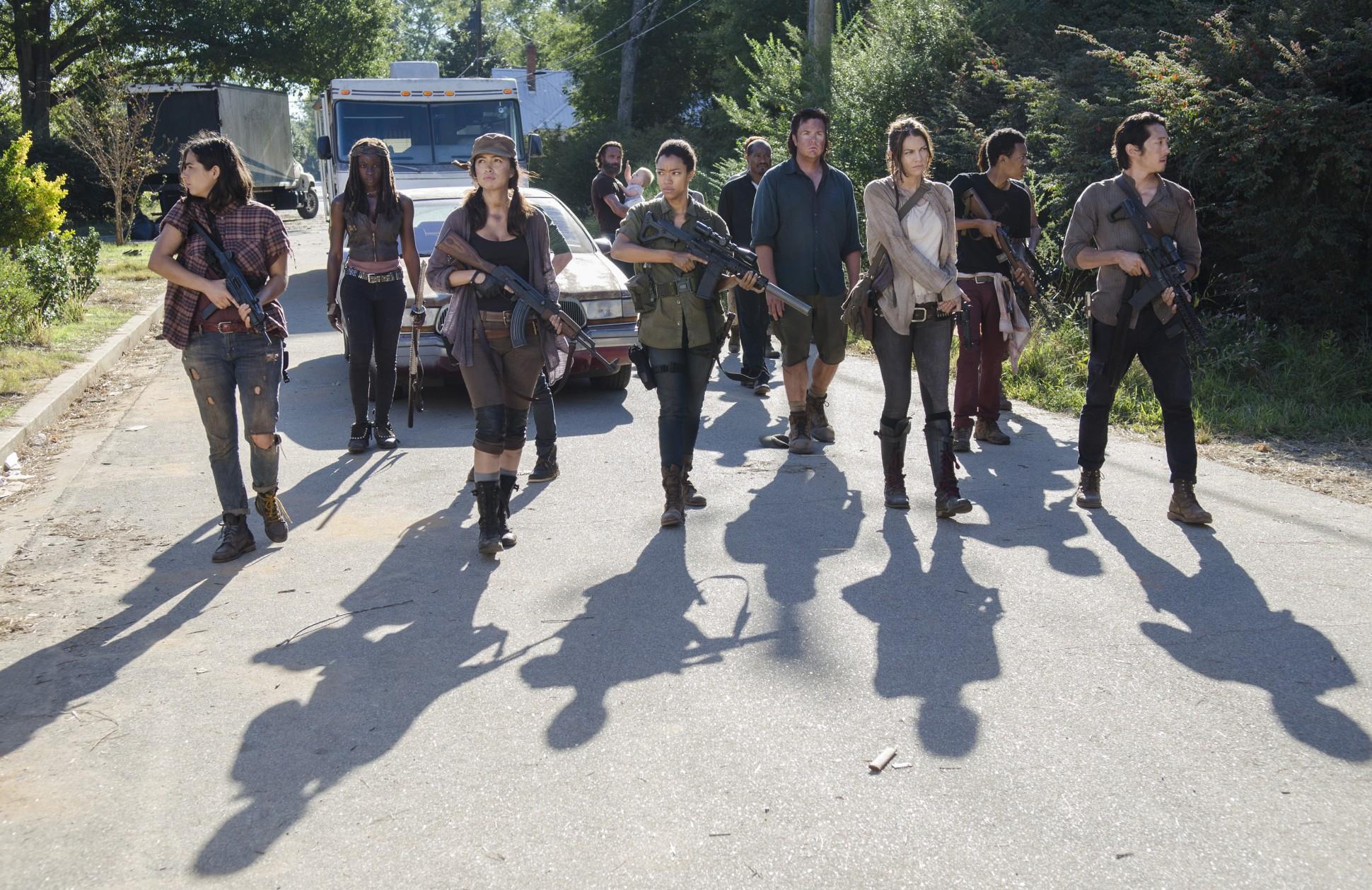 Deanna is a congressperson who manages the community peacefully. Every family gets a nice clean home and high walls to live behind. Carl even meets a group of kids, about his age, to hang out with. There are two boys and a girl named Enid. She is a recent arrival to the Stepford Complex and still very skittish. Chandler Riggs, who plays Carl, gives a great performance as the new kid on the block. When the others ask if he wants to go shoot pool or play games, there is a long silence as he searches for something to say, some anchor from his very short childhood to signal him that it is okay to just have fun.

Daryl is obviously uncomfortable in the new digs. He can’t hide it and doesn’t have the subversive guile that Carol has. He never stops scanning the landscape. If he’s standing next to a window, he’s looking out. Remember has a little Modern Family DNA this week with team Rick giving vignettes, to-camera, Deanna makes them record as part of the transparency of the community. Michonne sits down with a hard cover copy of Crime Without Punishment and tells Deanna they are ready for the community if it is what it looks like. She is the first to really buy into Deanna’s community, but something about it keeps her up at night. She’s thirsty, but she isn’t quite ready to guzzle the Kool-Aid.

Rub some dirt on it.

Team Rick has a hard time pumping the breaks. They’re all looking for something to do, beside the jobs Deanna assigns them. Carl spots Enid heading over the wall one afternoon. He follows but loses her in the woods. Ricks takes his own little adventure back to the little fixer-upper where he hid a gun in a blender. The twist; the gun is gone, replaced by a walker hidden under some junk and a few more walkers in the woods near by. Carl finds him and they get a nice father-son walker-smashing afternoon.

Glenn, Noah, and Rosita go on patrol with Aiden, Deanna’s a-hole son. He isn’t exactly Team Rick material; it’s amazing he has survived this long. Aiden almost gets Rosita killed when his walker-piñata gets loose. After patrol, Aiden picks a fight with Glenn and Glenn drops him right in front of Deanna. She appreciates Glenn schooling her son. Deanna asks Rick and Michonne to be the new constables, they both except. Aiden has to find a way to get used to the new Sheriff in town or start picking out a red shirt.

Is it possible Deanna is legit? So far, she makes a convincing show of her method and community. Rick and Michonne are great choices for building a constabulary.

Lets get some rest because tomorrow we…

Rick looks good with his new uniform and makeover, but underneath, the man is full of lessons learned. He tells Carol and Daryl that getting soft isn’t even a possibility for them anymore. Rick is determined to make the community living work and if the original inhabitants can’t keep up, he’s ready to take it from them.

To all the women and men returning from real-life conflict zones,

Thank you for your service; you’re the best part of our community. It’s okay to put your boots away and get some real sleep. The zombies are slow and nothing to be afraid of.