Tweetable Takeaway: Rick uses a flare gun to make a walking dead-man-o-lantern and Glenn drive thru miles of walkers on parade.Tweet

Airtime: Sunday at 9pm on AMC

THE WALKING DEAD wades into action again with “The Distance.” Aaron, the new character, tries to convince Team Rick to join his community. Audition is the word he uses. He confesses that he’s been watching the group for a while before deciding to ask them to join his community. Aaron promises his community is safe, with high, impenetrable walls, and fat with food and water. The one resource they continue to look for is the right group of survivors, like Team Rick.

Michonne, Maggie, and a few of the rest are ready to trust again. They want to give Aaron’s story a chance. Rick just doesn’t trust any part of the Aaron’s rap. At first, Rick doesn’t believe there is a community. He thinks Aaron is a scout sent by a larger attack force and has the rest of the team surveil the area outside the barn. The area is clear and Aaron continues his case by offering some photos of his community. Rick knocks him out with a hair-trigger punch. It isn’t so much that he’s upset or afraid of Aaron, it’s to have a private moment to discuss with the team. 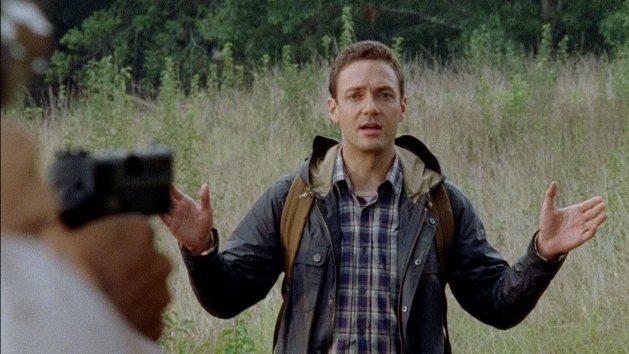 Rick has his highs and lows, but he is definitely experiencing a high at this point of the season. He’s back in leadership mode in the best way. Most of the group does not agree with him, but he has arrived at a place where he can really listen. Rick knows Michonne is looking down the road and has the best intentions for the group at heart. She isn’t a control freak. She’s smart and she knows how to both survive and protect others. This Rick is able to look at his team – Abraham Ford, Carol, Glenn, Maggie, and the others – and see them as a collection of badass skills. He knows if one of these people disagrees with him, he needs to listen. He knows they see things he doesn’t see when he can’t get past his kids.

What Rick doesn’t know is that Aaron does have back up with him. Somewhere out there, not far away and probably watching, is Aaron’s boyfriend Eric. When Aaron does regain consciousness, he doesn’t hold a grudge. He convinces Rick that he understands and empathizes with his caution. Still, Rick thinks the community is at best, fiction, and probably a trap. Michonne and Maggie both think the story is worth checking out and they lead a team to find the car and camper Aaron and Eric parked close by.

This leads the team into the best action sequence of the night. Aaron tells Rick the best way to his community is north on Route 16. He assures Rick his people have cleared it. Rick still doesn’t trust him though and leads the group up Route 23, where they run into a parade of walkers. Glenn drives the big Oldsmobile through miles of dead; they explode and splatter all over the car. When they finally do stop, the car won’t start again.

The camper is nowhere in sight and miles of walkers still roam between the two vehicles. Soon, Rick’s car sees a flare go up. Aaron freaks out when he sees the flare and takes off, hands tied into the adjacent field. Rick, Michonne, and Glenn stay and fight, but they don’t have near enough bullets. It’s hack and splat time. The shot you’ll wanna use the 15-second review button for happens when Rick fires the flare gun into a walker’s eye socket, making a dead-man-o-lantern. It’s the little things, right?

Rub some dirt on it.

Glenn finds, saves, and releases Aaron. Together, they join Rick and the others and walk towards the direction of the flare. Eventually, they find the camper group. Everyone is safe and they’ve discovered Eric, Aaron’s boyfriend. Maggie splints his broken leg. Aaron and Eric have a really cute little reunion moment. These are world-class storytellers and they know when we need a little relief to contrast the trip down Route Blood. Rick and Aaron both relax a bit for the sake of their loved ones. They’re looking for a community; they’re protecting a community.

Lets get some rest because tomorrow we…

The team is tired. They decide to sleep and get started again in the morning for Alexandria. The camper has some trouble on the way but Glenn knows how to fix it, thanks to Dale. Take a moment. Rick hides a weapon at an abandoned house outside of town but soon finds himself pulling up to another gated community. Is it legit or Woodbury 2.0? Carol tells Rick, “Even though you were wrong, you’re still right.”