Well, it’s the last episode of UNDER THE DOME, possibly ever. I haven’t heard that it has been renewed for a third season but if this is truly the last ever episode of the series, I’m quite disappointed. We start off rather abruptly where we left off last week, with Melanie recently relegated to the mysterious hole and Pauline near death after Lyle stabbed her in the back…literally. The gang rush Pauline to the makeshift hospital but not before she tells Julia that the dome chose her and a mystery man to lead everyone out. Wanna bet it’s Barbie? According to Joe, the dome is shutting down so he and Norrie and Hunter go in search of wifi. Barbie and Julia manage to save a farmer’s son from a barn fire but they can’t save his father. This will end up having nothing at all to do with the rest of the episode other than to underscore that the dome is, indeed, ending.

The kids can’t find a wifi signal and Norrie wants to find her mom and get away from the “giant killer suck hole” while she still can. Rather than spending possibly her last moments with her poor mother, Norrie follows Joe down into the tunnel. They don’t find much of anything down there except for a small crevasse and a fork in the tunnels but a monarch butterfly tells them to go down the right one. Rather than follow the butterfly, they head to the surface to inform Barbie of their “new” information. At the school, Pauline seems to be on the mend but Sam insists that he’s not a surgeon and that the internal injuries will probably kill her. Pauline sends Junior away to get painting supplies so she can maybe paint the way out but once he’s gone asks Rebecca to “let [her]go peacefully” because she’s already seen her own death.

After informing Barbie of what he already assumed was the case, Joe and Norrie have a heart-to-heart about their situation and how if they had never been trapped under the dome, they never would have met. It’s meant to be poignant and touching but ends up being cliche and sappy instead. Soon enough, Norrie heads outside with everyone else to the buses that are taking the town to the giant hole thing. Meanwhile, Rebecca has given Pauline a lethal dose of morphine to Pauline who has the chance to say one more goodbye to Big Jim before she slips away. Of course, Rebecca is an idiot and Big Jim knows right away what went down. He goes crazy and kills Rebecca with one swift hammer hit to the head and BAM! she’s gone.

Junior returns with the supplies to find Big Jim and Pauline gone and Sam unconscious. They run after them but they’re at home where Big Jim tries to make a deal with the dome to bring Pauline back. When the dome doesn’t comply, he starts the house, Pauline, and the painting she did of her death scene on fire.

Across town, everyone’s at the big hole and slowly making their way down and across the crevasse when Julia gets a distress call from Andrea, the elderly hoarder. Obviously, Julia rushes to her aid where Big Jim is holding her hostage. The plan is to make the dome’s life more difficult, so Jim is going to kill the four hands. He wastes no time shooting Andrea in the head and chases Julia around a while before she gets the better of him and escapes momentarily. He chases her through the woods but she gets to the hole where she, Barbie and Sam descend and Junior gives chase to Big Jim. After a brief reunion, Junior clips Big Jim in the shoulder and runs back to the hole with Jim slowly following. The entrance closes up behind Junior, blocking the way for Big Jim. 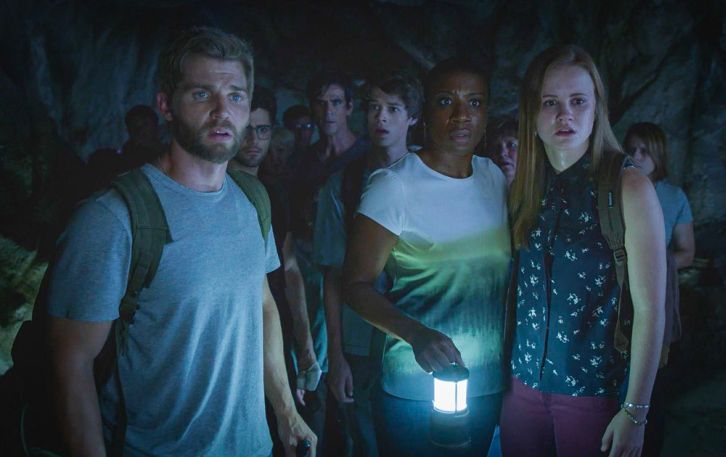 In the tunnel, the crevasse has widened just in time to separate Julia and Barbie. She convinces him to help the others, telling him about Pauline’s vision about the mystery man. Turns out she was right because they reach a dead end in one of the tunnels and only Barbie’s hand can open the portal. What’s on the other side? It’s Melanie bathed in a white light telling everyone to follow her home.

So, I’m pretty sure the ending to this season (or series) was meant to be mysterious and intriguing. What it ended up being was pointless and confusing. There are too many questions left unanswered and, frankly, at this point I don’t even care what the answers are. Does Big Jim die? Are they finally out or have they died and gone to heaven? Will Julia and Junior ever catch up to the group? Who knows? I am impressed that people actually died (and will presumably stay dead) this episode but it’s too little drama way too late in the game.

On a slightly hilarious note, I happened to be watching this episode with my parents who are visiting me and just trying to explain the premise of the show to them earned me some skeptical looks. Well, Junior’s mom faked her own death but now she’s back and her brother killed Junior’s girlfriend but now everyone’s friends. And Barbie and Julia are in love but two weeks ago he killed her husband who was going to leave her anyway. Oh, and he’s kind of a shady guy but in the last week and a half (on the show) he’s really cleaned up his act. You never realize how crazy you sound until it’s too late.

I don’t want to be that person but for those of you who haven’t yet tackled the 1,000 plus book version, the book is way better. Not only are the characters better presented, but the events make more sense and the ending is much more satisfying. I won’t spoil anything for anyone but don’t let the series deter you from giving the book a shot.

On the off chance that the series does get renewed again, I’m not really sure how they’ll write themselves out of the corner they’re stuck in now. The dome’s on its way down and everyone’s stuck in a tunnel that they can’t get back out of. They could always go the “Newhart” route and have it be all a figment of Joe’s imagination. No, that would be terrifying.

Keep up with all the “Under the Dome” reviews here.