Well, this week UNDER THE DOME still has its formula down pat. We get some kind of dome-related, danger causing issue – this time it’s a dust storm – and then we have an investigation of some kind that never seems to be solved – the underground tunnel. There’s also the slightly sinister “bad guy” who used to be Big Jim or Junior but has now become the increasingly obnoxious Rebecca or the largely absent Lyle. Seriously, how many episodes has it been since we’ve actually seen Lyle? We pick up right where we left off last week: with Junior, Sam and Rebecca peering down into a locker-turned-secret tunnel. Sam and Junior brave the tunnel, following what I assume are supposed to be Lyle’s footprints.

Meanwhile, back at the diner (aka: the only place in town, apparently), Barbie’s the new sheriff in town and sets off to look for Sam. Julia and Melanie have a heart-to-heart about boys and friendship before Julia reveals that she dropped the egg in the lake. Again, we get the same old song and dance that the dome meant for her to do that and Melanie believes the dome brought her back for a reason. Will we ever learn the reason the dome is doing these things or will the reasoning just be endlessly brought up without a conclusion? Maybe the dome wants us to wonder where this is all going… When Julia attempts to take a bit of control over the town, Big Jim swoops in to usurp what little power she has. Good thing Big Jim gets called away before too many insults fly – although, “Is there a brain under that hair?” is a pretty solid burn moment from Jim.

As for the investigation of the week, Junior is determined to kill Lyle at any cost and keeps trucking down the tunnel until he and Sam find…Barbie. It’s a bit of a let down until Junior sees his mom’s journal, which is booby trapped, and the tunnel caves in. No one’s hurt but Junior is stuck on the “out” side, while Sam and Barbie are trapped inside together. Up top, the town is experiencing the dome-related issue of the night, a dust storm that threatens to clog the dome’s pores. Rebecca says it’s an easy fix. All they need is to get some water in the air using her giant windmill experiment that just happens to be ready to go. As Julia worries about Barbie, Junior worries about where Lyle might be and goes off with Melanie to protect the four hands, just in case.

They arrive at Big Jim’s house after a slightly awkward moment in the car when Melanie tells Junior she thinks Lyle probably killed her. Well, she’s got a 33.3% chance of being right, I guess. Norrie finds them in a slightly compromising moment – nothing even PG rated but you know where they’re headed – and she reveals that she and Joe had a fight about Melanie. Now that he’s in danger, though, Norrie realizes she’s being a brat and they go searching, finding Joe at home where he says he’s glad Angie’s dead because at least she’s not stuck under the dome anymore. Word. Melanie’s convinced that the dome wants them to go find the egg, so off they go. What if the dome wanted them to jump off a bridge, would they do it?…yeah, they probably would. 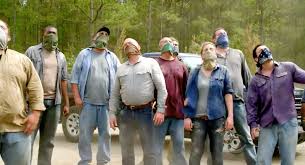 Way under the dome, Barbie and Sam split up, each picking a tunnel to go down. That is, until Sam sneaks up behind Barbie. Luckily, Barbie turns around before Sam can do anything more than scare him but now they’re both suspicious. Well, more suspicious. Barbie, unwisely in my opinion, confronts Sam about knowing Melanie before. Again, before things get too far, Barbie slips and almost falls down a very steep and very high cliff but Sam saves him…for now. Barbie realizes they should have hit the dome by now but it doesn’t seem to go down that far, which should be good news, but just ends up being kind of irrelevant at this point. Sam tells Barbie he’s pretty sure Lyle pushed Melanie that night, which, of course is the story he tells.

At the diner, Big Jim tries to usurp Julia’s power in her absence, which doesn’t work until the townsfolk realize how bad the dust storm has gotten. Then it’s Big Jim’s plan or nothing, so they band together and hoist up the windmill, saving the town once again through science! Bill Nye would be so proud. After their success, Big Jim tells anyone who will listen that Julia cares more about saving Barbie from “something” at the school than she does about leading the town. Are these people sheep? One person besides Julia must have a mind of their own, it would be nice to see that once in a while.

Julia and Rebecca are indeed trying to blow up the blockage in the tunnel. Before they succeed, though, Barbie and Sam bond over the fact that they’re both killers. Isn’t that sweet? Then, thanks to Sam’s slightly feminine and very loose shirt, Barbie realizes that he’s the real killer. He confesses, saying that the only way to bring down the dome is to bring down the four hands. After he’s done that, Barbie can kill him or he’ll just kill himself. Either way. Well, Sam chooses the latter, saying that the onus is on Barbie now to kill the kiddos right before he jumps off the cliff into the bottomless pit. I have to say, this one surprised me a bit…but not as much as it could have. I really don’t care very much about Sam, so his loss is sad but not devastating.

Speaking of the kiddos, they go to the lake to retrieve the egg, which comes when they call it, like any good egg should. They all four touch it and see the pink stars again before getting a pink, ghostly image of an obelisk that Melanie recognizes as being from her hometown of Zenith. Coincidence? Probably not. Interesting? Again, probably not. The good news is, Joe and Norrie kiss and make up and that’s pretty much as far as this storyline’s going tonight.

The bomb goes off without a hitch and Julia rushes down the tunnel, embracing Barbie when she sees him. He breaks the news that Sam went off the deep end and…that’s it. It’s a bit of a lame ending to a less than exceptional episode.

Next week, Barbie and Julia rappel down the bottomless pit…but will they both live to tell the tale? Yeah, probably, but let’s watch anyway.