Unfortunately, as I expected, the second episode of UNDER THE DOME didn’t live up to the high bar Stephen King set with the premiere. Of course, there’s the big question he left us dangling with last week – did Angie really die? Well, readers of the book saw this one coming but it was nonetheless shocking to realize that one of the main characters of the show had been brutally cut down in the halls of a high school. But back to that later. The episode opens with Barbie and Julia going at it like rabbits, only to be interrupted when they notice a flock of butterflies (yes, butterflies) have overtaken their house. This seems to be happening all over town, including in the high school where Junior finds the butterfly covered body of Angie. Big Jim seems to be in a very happy mood over at the cafe. That is, until Junior shows up covered in blood with the sad news of Angie’s death. 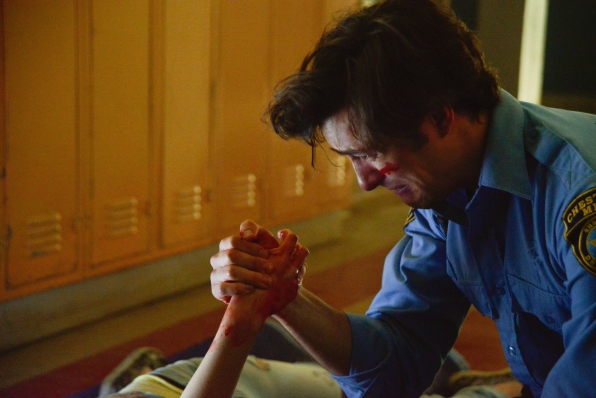 Next, we check in on Joe and Norrie who seem to be having a wonderful time smooching in the woods, again, until butterflies start to fall dead from the sky. These butterflies are halting the nookie all over town. This leads them to a patch of forest where the nameless Drowning Girl is sleeping. As they head back to Big Jim’s, they walk by the school and Joe, rather perceptively, realizes what went down just by looking at Barbie’s face. A little aside here: one of the main issues with this episode is the amount of exposition given. I’ll explain. Somehow, Joe can miraculously intuit that because there’s police tape and people crowded around, Angie must be dead. No explanation, no nothing. It’s a bit far fetched if you ask me. Soon after, Barbie sees the Drowning Girl and immediately puts two and two together: she must be the girl who killed Angie because they found a woman-sized bloody footprint at the scene. I guess no other women in town wear shoes anymore. I mean, I’m all for trimming the fat where it needs to be trimmed, but this seems to be an extreme level. Ok, rant over.

As Julia and Barbie are discussing the fate of the Girl, they see smoke in the distance. The lone schoolteacher Rebecca (who, if you ask me is a bit creepy), has started a huge brush fire, burning many of the precious crops in the confined town. She explains that the magnetic field has caused the butterflies to have an altered growth cycle, making them grow at an accelerated rate. Rebecca has calculated that the infestation of butterflies will soon swarm Chester’s Mill, leaving the residents to starve in its wake so to kill the butterflies, they have to burn the fields where they’re swarming. An interesting side note: did you know butterflies symbolize rebirth and are a sign of good luck except when seen in large numbers, which indicates a bad omen? Those writers are getting clever on us.

Anyway, there’s more mystery behind Junior’s mom after Sam shows Julia a picture she drew years ago that slightly (very slightly) resembles the Drowning Girl. At this point, unless there’s some bigger mystery to be had, I’m already over the mother clairvoyant thing. Back to the main problem, Big Jim has a better idea than burning crops – his drug mule crop duster plane! How convenient! Barbie does a bit of covert manipulation to snag flying rights, even though Big Jim is convinced the butterflies are another test from God. Well, the first pass goes well but when he gets to the last field, Barbie’s running out of gas and dangerously close to the dome. After shredding the wing on the dome and running on fumes, it looks like the end for Mr. Dale Barbara. Until Big Jim saves the day, telling him about a reserve tank of gas. This is another instance of bad storytelling, but in the other extreme. Barbie is clearly saved but instead of letting the audience figure that out for themselves, he’s forced to state the obvious saying, “It’s like it switched to another tank of fuel. Now I can land this thing.” No shit, Sherlock. We saw that one coming a mile away. 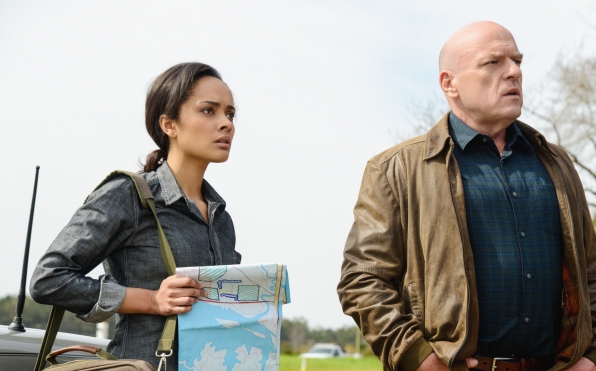 Back on solid ground, Sam and Julia play CSI, examining Angie’s body but only after Junior admits that he was black out drunk and could possibly have killed her without realizing it. He also blames Big Jim for killing her but that’s probably just because he doesn’t want to be the one in hot water. So experts in all things, Sam and Julia find a man-sized hand print on Angie’s body, which convinces them Drowning Girl is innocent. Unfortunately, Junior has already convinced Joe and Norrie that she’s the killer and the three musketeers confront her in her cell, each one ready to pull the trigger and take her out. Uncle Sam and Julia arrive just in time to save her…again.

And, just as I (and I’m sure many of you) predicted, Julia and Barbie get in what I’m sure will become a long running argument about each of their new friends. Is that even a love triangle? A love square, maybe? Either way, the green eyed monster of jealousy rears its ugly head, derailing even further what should be a very exciting episode. Plus, I’m not sure Rebecca even likes Barbie because at Angie’s funeral she tells Big Jim she hates that Barbie gets all the credit when Jim was the one who saved everyone from certain butterfly death.

When Joe’s not at the funeral, Barbie finds him in the cafe looking for Angie’s missing bracelet. Eventually, he gives up and they head over to the church only to find Big Jim making another of his long-winded speeches about being tested and having faith. Meanwhile, Junior’s drinking again and finds Angie’s lost bracelet under his bed, further proof that he’s probably the killer. At the funeral, the congregation, creepily in unison, say that they have faith in Big Jim. I wasn’t aware Chester’s Mill was home to an unassuming cult, but there you have it. Creepy Rebecca praises Big Jim again but makes it clear that now is the time to cull the herd, before the food starts running low. Hard to believe it’s only been 2 weeks since the dome descended.

Next week, we can look forward to a storm of bloody rain and another push to thin the herd. Is it just me or are the religious overtones getting to be a bit much this season? I’m looking for a bit more action and a lot more character development. And forget the butterflies, what about that big invisible, impenetrable dome? Let’s get back to that. Last but not least, I’m seeing a “Lost”-esque problem developing of too many questions and not enough answers. Can we just start a campaign to bring Stephen King back? Please?