Well, believe it or not, these guys are still trapped under a giant dome. So, what do they do? Turn on each other, of course. This episode of UNDER THE DOME begins with a recap of the events of the previous episode. Melanie Cross says, once again, that she needs to find Sam. Barbie explains to Julia what’s been happening with Melanie, even though the audience has had this re-hashed at least a dozen times by now. We get it – there’s a bigger mystery involved. She should be dead. How about we get some answers rather than the same old facts reiterated again and again…and again. Barbie also tries to get back on Julia’s good side by explaining that the only reason he was with Big Jim was to find out the plan and stop it if it went too far. At this point, I’m pretty uninterested in the reasoning behind the actions of most of the characters. They’re not focusing on what’s important and this season has been mostly about petty differences and ridiculous solutions to non-pressing problems.

Sam goes back to his cabin to find Junior ransacking his stuff, looking for his mom’s missing journal pages that Lyle left behind. Surprisingly, Sam doesn’t know Pauline is still alive and seems to be pretty pissed about it, rather than relieved. They continue searching, this time at Lyle’s barber shop where Sam plants the journal pages they’re looking for and conveniently finds them within 30 seconds. Junior’s not too bright these days. Does anyone else miss the evil, manipulative Junior from last season? He was vicious but at least he was more interesting.

The main action in town is the impromptu meeting where Julia and Barbie arraign Big Jim and Rebecca. The only problem is, the town’s split. Half blame Julia for throwing Big Jim in jail, while the other half see how much of a threat Big Jim and Rebecca actually are to the town. A brawl breaks out and one very unwise townie pulls a gun. He’s quickly taken down by Barbie but new sheriff in town Phil is trigger happy and shoots to kill. Julia confronts Rebecca, blaming her for causing the panic that led to Wendell’s death while she’s literally trying to wash the blood off her hands. Rebecca’s not insensitive to his death, though, and later confesses to Big Jim that she didn’t mean to cause any suffering, she was just trying to help. Big Jim reminds her “death isn’t pretty. Sometimes it’s necessary.” It’s as close to a “be glad it’s him and not you” response as you can get. Just when we though Big Jim was starting to have some compassion, he proves that he’s always looking out for number one. 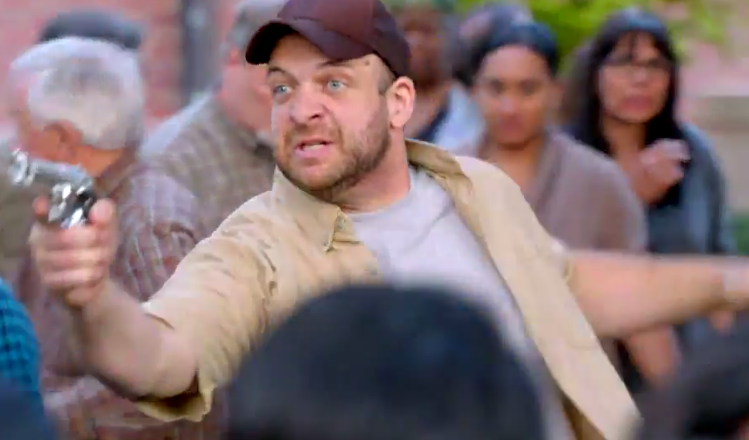 (Source: Under the Dome Wiki)

Meanwhile at the kiddie table, Joe, Norrie and Melanie head to the dome to see if it triggers any memories or visions. The first indication that Melanie’s not like all the rest was that her first contact with the dome didn’t result in a shock. Other than that, she didn’t see anything. Then, one thing leads to another and Joe and Melanie end up kissing, which pisses Norrie off and results in a physical fight between them. I really though Norrie would be able to hold her own better than she does but I guess there’s no competing with the un-dead. Joe then tries to break the tension with a brilliant plan – test Melanie’s blood to see if they can figure out what makes her different. The thing is, Joe’s smart but he’s no doctor, so they get as far as drawing blood and then they’re stumped.

Smartypants Junior tells Uncle Sam (yes, I do appreciate that he is Uncle Sam) that Angie was one of the four hands that his mom predicted it would take to bring down the dome. He then proceeds to reveal that the other three are him, Joe and Norrie, giving Uncle Sam quite a hefty hit list. He runs off to protect them but after checking around a while, Junior and Sam decide to stop for a drink instead. Sam gets Junior so wasted that he has to lie down, which gives Sam the perfect opportunity to smother him with a pillow. Too bad for him, Junior comes to just in time to say he loves him and Sam loses his nerve.

Back in jail, Big Jim gets a visit from former Sheriff Phil who was recently stripped of his badge by Julia, and even more recently consoling himself with booze. Big Jim masterfully manipulates Phil but we don’t yet know to what end. Newly crowned Queen of Chester’s Mill Julia has organized a voluntary food drive which goes pretty well until the building all the food is housed in explodes. After some life saving efforts by Barbie, it’s clear that the only casualty is the food. Phil shouts that Big Jim would never have put all his eggs in one basket like that and that it was probably a faulty generator that caused the explosion. Well, as we all know, it was really Phil at the behest of Big Jim who started the place on fire after he moved most of the food out of harm’s way. Norrie’s mom Carolyn walks in to find Phil checking out the supplies and he attacks her. Barbie goes back to the scene of the crime and finds Phil holding Carolyn hostage so he does what comes naturally – kicks some ass, clipping Phil in the shoulder in the process.

Meanwhile, Julia goes to Andrea’s house (a character previously without a name) and finds that her late husband was a survivalist (convenient) and she has hoarded enough food to feed the whole town for months. She offers to share it with Julia because she trusts her to do what’s right for the town. Well, what Julia thinks is right for the town is to free Big Jim and Rebecca. Can’t say I agree, but then I’m not Queen of Chester’s Mill. Big Jim makes another lame speech about the good of the group but it’s clear that he and Rebecca are now on different sides after what he convinced Phil to do to the food supply. Big Jim better watch his back – that Rebecca’s cray. While all this grown up stuff is going down, Joe drags Norrie into the kitchen to apologize for kissing Melanie and to say that he loves her. She’s not buying it and rightly so. She can’t be pushed aside every time a girl comes back from the dead, now can she?

Melanie convinces Rebecca to help her test the blood but while she’s at the school, she hears a ruckus from the hallway. Turns out Sam and Junior found a hidden painting of Pauline’s with the obelisk from Juniors vision and the number on the locker. They pry it open and find a tunnel that goes to…? I assume it’s a way out and that’s how Lyle got out of dodge and probably how Pauline faked her suicide but we’ll have to just wait until next week to know for sure. 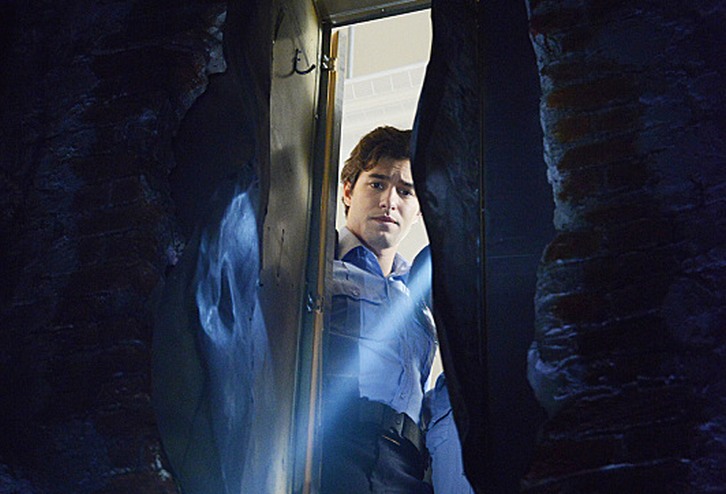 Next week the dome’s pores get clogged like a hormonal teenager and Junior may be trapped in the tunnel after a rock avalanche. What will they think of next?