While everyone else was watching the Emmys, I was watching UNDER THE DOME…the highlight of which has become the commercials. If you recall from last week, Barbie got out and then made it back to the dome to warn Julia not to jump off the cliff because Danger, Will Robinson! So, after he was dragged away (minus the glasses, which he should have kept), he was thrown into an interrogation room and asked repeatedly about how he got out and where the power source (the egg) is. Inside the dome Big Jim is trying to weasel info out of Julia and asks her if she wants him to put a team together to retrieve Barbie’s body, which he knows is not there. I’m not sure what this is supposed to accomplish. Big Jim knows Julia’s lying…Julia’s not going to spill the beans…what’s the point other than to remind us what’s going down here? Julia and her gang of kids head to the high school just in case Barbie manages to get another email through. Even though they saw him get dragged away. By the military. Logic. 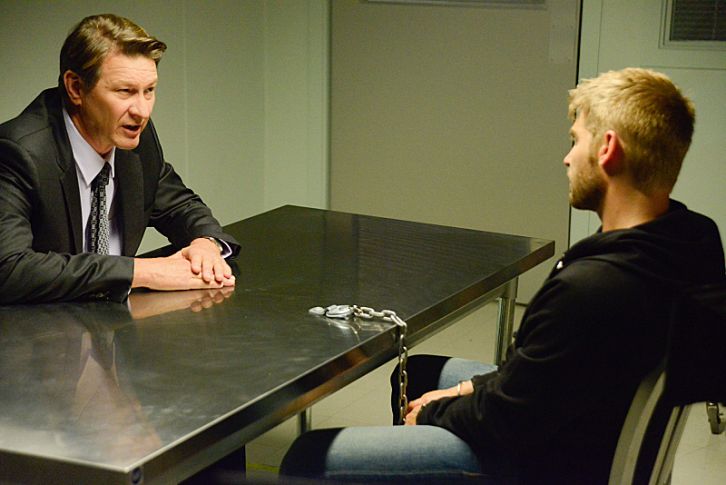 Outside the dome, the comeback crew discuss the ominous red door. There’s some more religious symbolism there and the brilliant Pauline announces that it’s probably a way back into the dome! She has to get back in to save Junior! Ok, first off: we don’t need you to hold our hands, show. We remember last week. We don’t have amnesia. Secondly: Pauline is one of the most boring characters to ever float across the airwaves. There’s nothing to her other than a weird affinity for stating the obvious and the need to get her son back. Third: I’m pretty sure Junior can take care of himself under the dome. Barbie’s stuck in the handcuffs but he gets a visitor! His dad tries to play the “I’m not sure what they’ll do to you if they don’t get what they want” card. But guess what? Barbie’s dad’s in charge of the whole thing and he tells his henchman to do whatever it takes to get that egg.

Speaking of dysfunctional father/son relationships, Big Jim and Junior are at the cliff’s edge having a moment about Pauline, who Junior knows is alive but hasn’t told yet. At the Barbie dream house, Mr. Barbara gets Hunter to send another message and Julia and the Juliettes are conveniently waiting at the school to receive it. Even better, genius Joe once again states the obvious by letting the other dolts know that whoever’s sending the messages controls the signal, too. Gee, thanks Joe. It’s a video message from Mr. Barbara asking for the egg. The good news is that Barbie can take care of himself and manages to escape and flees to Hunter’s house where Pauline, Sam and Lyle are hanging out after failing to find the red door.

The always charming Big Jim confronts Rebecca about the goings on so far this episode, but soon realizes that not only does Rebecca not know Barbie’s alive, but she also doesn’t know about the egg. Rebecca decides to play both sides (or maybe that’s what she’s been doing all along) and goes to confront Julia and ask her nonchalantly to trust her about the egg thing. Meanwhile, Big Jim is at the dome’s perimeter making deals with the guards. He offers up the egg for getting everyone in town out. No deal there, but he manages to get them to agree to let him and Junior out. The military knows exactly where the egg is, so Big Jim goes on his merry way to retrieve it. Only trouble is, Junior stole the egg with Melanie and they take it back to the bunker to hide it from Big Jim. While there, they get cozy on the bunk bed where Junior tied Angie up last season because Melanie thinks it’s “peaceful.” It’s super weird and I’m pretty sure Melanie’s just trying to get with every guy in town before she dies again.

At the dream house, Barbie tricks his dad into believing he’s surrendering when he and the Barbie dream team are actually searching for the red door, which is conveniently on Barbie’s vast estate. But, as they say on the show, “if you still believe in coincidence, you’re not paying attention.” At least they’re self aware. Inside the root cellar, they find a door leading to a tunnel that “wasn’t there before.” Once they get in there, they encounter a scary dusty spiral thing that Pauline foretold. No, it’s not as scary as the black smoke from “Lost,” but they’re trying. The vortex thing sends Sam into a flashback at Pauline’s funeral when Junior says that one day Sam will save his life. Barbie has an even stranger flashback. He’s a child and he’s talking to Melanie who is only there for one day. It’s not ominous as much as it is just confusing. Pauline has a vision of herself in the egg crater with a fake Melanie. They all pop up in the lake (along with Hunter) inside the dome.

The only one not to come through the tunnel is Lyle, so Sam is elected to stay behind and wait for him while Barbie looks for Julia and Pauline goes to find – you guessed it – Junior. Of course, as you probably predicted, when she gets home she doesn’t find Junior (who is snuggling in the bunker) but Big Jim instead.

So, much like the title of this episode, the series as a whole has gotten predictable and very on the nose. Week to week, it’s the same song and dance. People are trying to get out of the dome, people are trying to get into the dome. Big Jim and Rebecca are allies, Rebecca and Julia are allies. All I know is, this already thin storyline gets more and more frayed every week and pretty soon, it’ll be all but useless.

Next week, Big Jim (taking after Joe, apparently) tells Pauline she’s dead. Sam is bleeding…again and Barbie and Julia have a heartfelt reunion. I can’t wait.