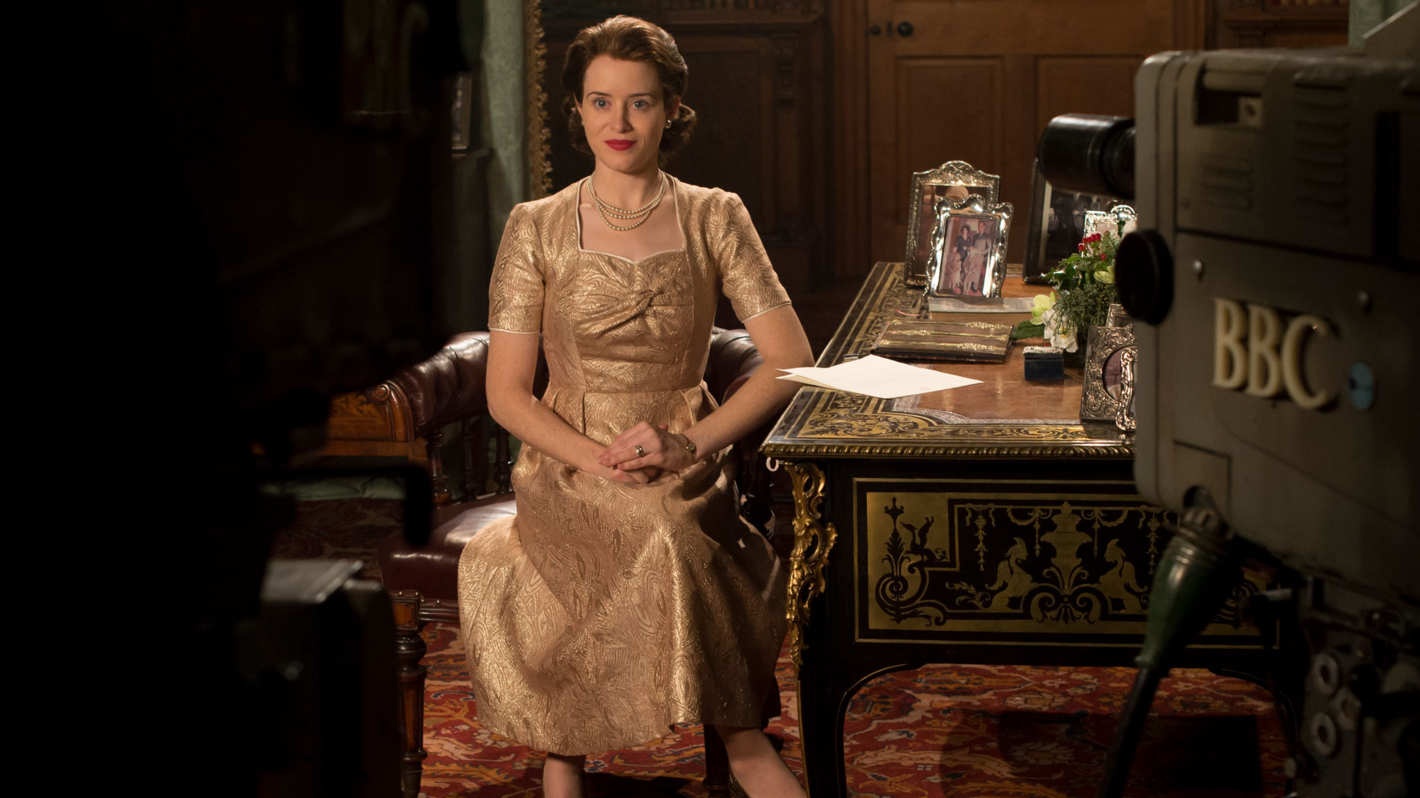 The Crown Season 2 returns to startlingly good form with its middle segment of episodes, largely because the series’ plot swings back to what its best at. The Crown is most interesting when it focuses not just on Queen Elizabeth II as a real woman, but when it examines her reign in the context of the conflict between the very modern moment she finds herself in, and the very ancient institution in which she serves.

Elizabeth holds much of this tension within herself already – it’s at the heart of many of her earliest conflicts with Philip, this dichotomy between her feelings as a wife and her duty as a sovereign. In Season 2, we see this theme expanded further, as Elizabeth is increasingly forced to contort herself into an extension of the crown, living a life that’s more a depiction of her title than a real person. There are fascinating moments where we see the real woman behind the royal identity, an Elizabeth who is resentful of the ways that others judge her, who is angry at the things she must silently put up with in the name of her job, and who is anxious over the performative duties her role frequently requires, even when that means papering over the cracks in her marriage.

(It goes without saying that this complicated woman is much more interesting to watch than the season’s initial story arc centered around Philip’s whiny and self-indulgent resentment.) 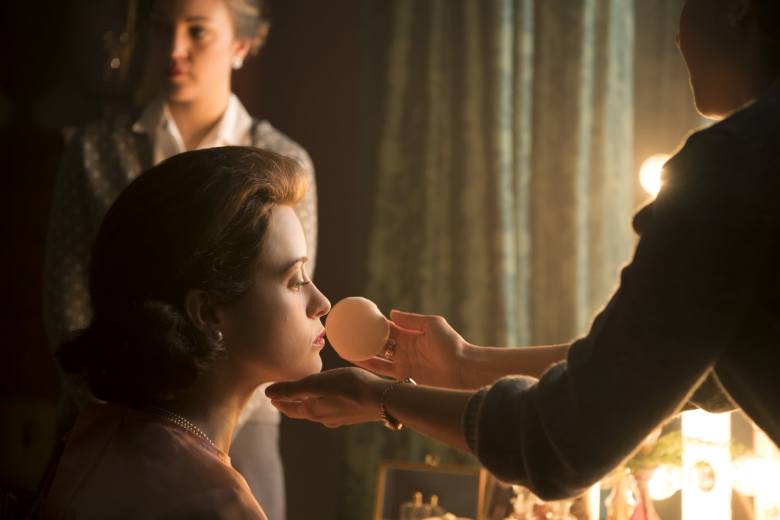 Claire Foy sells these instances of personal tension with gusto, playing an Elizabeth who always dutifully performs that which is expected of her, but who nevertheless has real fire underneath. We don’t get to see this that often, because so much of Elizabeth’s job, so much of being “the Crown” means that the woman who wears it must be invisible as an individual. But there are several key moments – during the queen’s meeting with Lord Altrincham, her final confrontation with her uncle Edward, even her discussion with her sister about their different paths in life – when a different Elizabeth is starkly visible, even if just for a minute or two. (And, not for nothing, but that woman is wonderful.

“Marionettes” (Episode 6) deals most directly with these themes, using the real history behind the Queen’s annual Christmas Day broadcast as the basis for its story. Part of the reason that this episode is so enjoyable is that it goes back to a formula that really works well for this show – the dramatization of historical fact. There are elements of this story that aren’t true – Elizabeth didn’t give a speech like that to a factory of sad-eyed autoworkers, but she did say most of the words that were in it. Many of them are, in fact, from her 1954 Christmas speech – including the super awkward stuff about appreciating the ability of “average men and women” whose “lot is cast in dull and unenvied surroundings” to “withstand the fatigue of dull repetitive work.” Yikes?

Lord Altrincham was also real person, who did help push the monarchy toward a more modern relationship with the public. His scathing article about the Queen’s mannerisms and speech is a big part of the reason the Palace televised the Queen’s Christmas broadcast for the first time in 1957. It is, of course, unknown whether Foy’s depiction of the Queen’s frustration over the incident is historically accurate, but it is known that the real Elizabeth was anxious and uneasy about doing the TV broadcast.

The Crown does a fantastic job of teasing out the idea that the crown is a product as much as it is anything else, and that the Queen’s job is to sell it as an institution, to the people of Britain. That this also inevitably makes Elizabeth herself a product instead of a person is an intriguing undercurrent that runs throughout the show, and one that colors Foy’s performance throughout the season in intriguing ways. (For the record, I like the idea that Elizabeth in some way is choosing to sublimate herself to the role she carries, rather than the idea that the show is suddenly less interested in exploring her POV. It makes me less angry about The Crown completely skipping over how Elizabeth got from wanting to throttle Philip to desperately wanting more kids with him.) 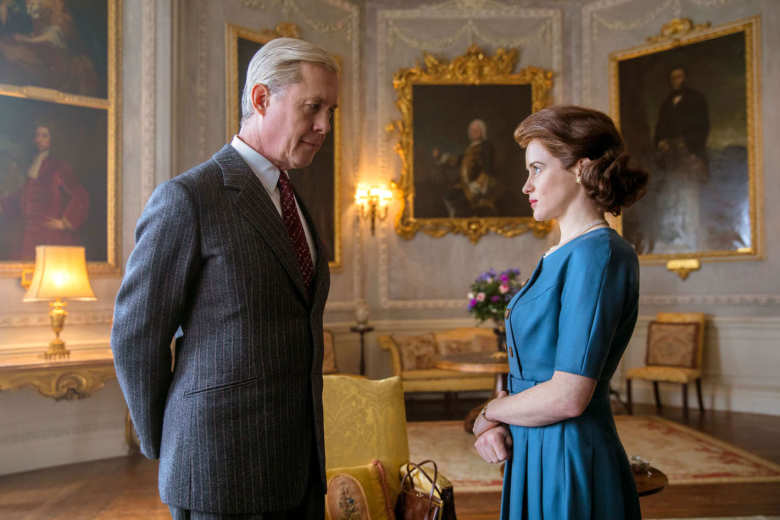 “Vergangenheit,” on the other hand, makes up a fictional story to tell a true one. There’s no evidence that the Duke of Windsor ever returned to England on a secret mission to try and secure himself a place in his niece’s government. (But, then again, there probably wouldn’t be even if he had.) Alex Jennings plays the former King Edward VIII like a sarcastic Drag Race diva, gleefully providing running commentary to his wife about everyone they hate and generally exuding an attitude of put upon boredom. “A life of pleasure really has its limits,” he sighs sadly to Wallis as the pair tries on pirate costumes for another (apparently insane) Parisian party.He is completely ridiculous and, as a result, an utter joy to watch. Don’t get me wrong – Edward is terrible, as this episode goes on to illustrate. But as TV characters go, he’s wildly entertaining, mostly because The Crown seems so utterly sure of who he is. (Which is, for the record, an awful person.)

Elizabeth’s relationship with her uncle has always been an interesting one. There’s a weird dichotomy at work there – Edward VIII is one of the few people who can truly understand the burden she carries, but he’s also the reason she carries it. It makes sense that, on some level, Elizabeth might want to forgive him, but find herself unable to, in the end. Also, there’s the fact that he’s a literal Nazi sympathizer who was friends with Hitler.

Though it might seem as though this is a subplot somehow specifically crafted for our current cultural moment – it’s not. This all really happened, pretty much the way the show plays out. The top secret Marburg files were real; Churchill did indeed try to hide them; and it all eventually came out anyway in the 1950s. The documents detail a German plan to kidnap the Duke and Duchess of Windsor and re-install Edward as a puppet king after their invasion of Britain. The Duke and Duchess of Windsor had visited Hitler in Berlin some years earlier – the real photos of that trip and their meeting with the Fuhrer are displayed to great effect during this episode’s credits – and that trip had apparently led Germany to believe Edward would be sympathetic to the Nazi cause. 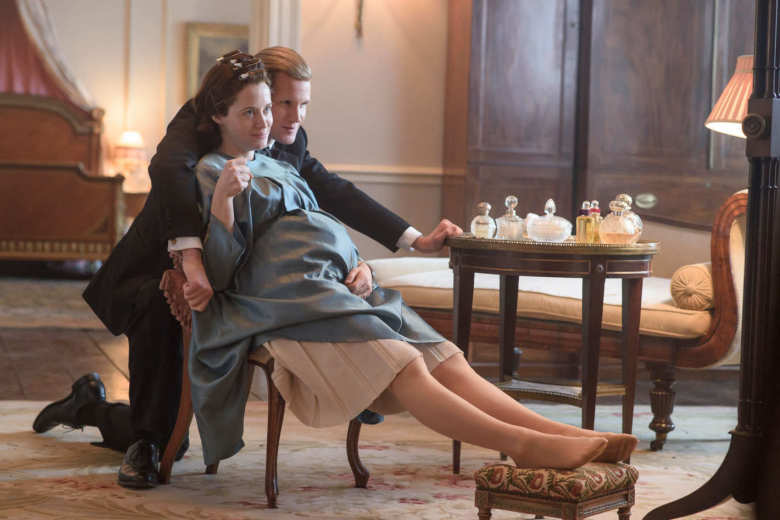 The files also included several German telegrams full of alleged statements by the Duke, including that “heavy bombing will make England ready for peace.” (Ummm…)Nothing came of the kidnapping plot, and Edward and his wife were eventually appointed to a post in the Bahamas, to get them out of the European theater entirely. But you can see why this cover-up was a scandal. The Crown plays this out in a deliciously satisfying way, showing us Elizabeth’s discovery of the cover-up and her confrontation with Edward, but not coloring outside the lines of actual history in any real way. (In real life, Edward declared the content of these secret telegrams to be “complete fabrications” and the British government stood behind him. So it’s very fun to imagine that this is what happened inside the palace.)

Season 2 is at its best when it explores these messy historical events in the context of the real people who lived them. These middle episodes are so compelling precisely because they aren’t afraid to delve into the emotional lives of their characters in a way the first four weren’t. Yes, these are technically more episodic, “crisis of the week”-style stories – a certain event happens and is resolved within the span of an hour – but they more purposefully use the events depicted to illustrate larger points about Elizabeth, and the monarchy itself.

Can the end of the season continue this momentum? Or perhaps find a slightly better balance between its first and middle thirds? After all, Philip makes only sporadic appearances in these installments, and the story isn’t nearly as focused on his feelings or perspective as it was previously. But, to be honest, I barely miss him. This is Elizabeth’s story, and The Crown is a better series when it focuses on that fact.