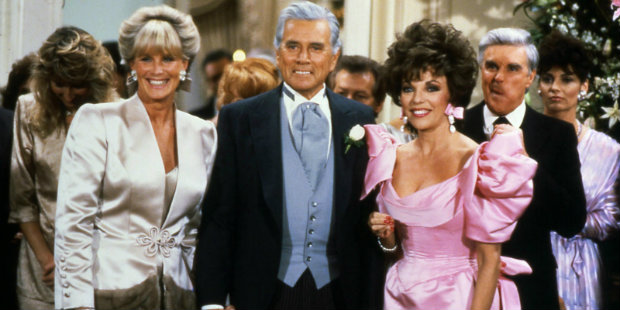 Based on the ABC primetime soap opera that ran from 1981 to 1989, The CW is currently working on a reboot of DYNASTY. Gossip Girl executive producers Josh Schwartz and Stephanie Savage are set to head this new iteration, with Sallie Patrick penning the script and executive producing alongside Schwartz and Savage.

The original series was created Richard and Esther Shapiro, who are also attached to this new version, and followed the wealthy Carrington family in Denver, Colorado and their many ups and downs throughout life. It starred the likes of John Forsythe, Linda Evans, and Joan Collins

In this modern-day remakes, events will be centered around two feuding, wealthy families: the Carringtons and the Colbys. What’s exciting about this new iteration is that it will focus primarily on the perspectives of two women, Fallon Carrington, the daughter of billionaire Blake Carrington, and her soon-to-be stepmother, Cristal, a Hispanic woman. There’s bound to be plenty of love, betrayal, drama, glitz, and even murder (as there is in any good soap).

In 2012, TNT rebooted Dallas and while ratings were initially good, especially with much of the original cast, eventually it declined and was canceled after three seasons.

Schwartz and Savage are currently working on an adaptation of 13 Minutes for Netflix, as well as Runaways for Hulu based on the Marvel Comics. They are also producing several other upcoming films and series, including a remake of War Games, Monster High, and Misfits at Freeform. They’re primarily known for their television work on The O.C., Hart of Dixie, and Gossip Girl.