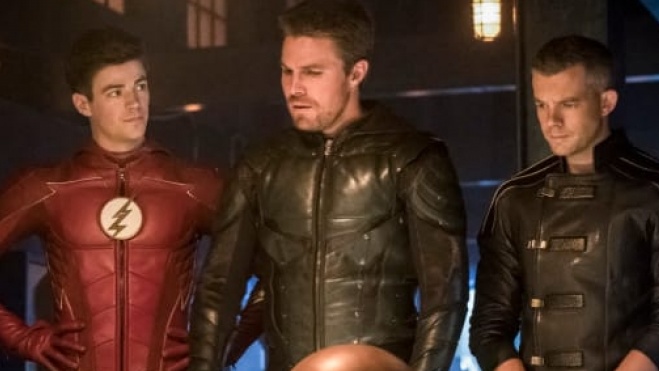 So here we are. Part 3 in the crossover event that feels like The CW spent their entire budget on. “Crisis on Earth-X, Part 3” finds our heroes at their lowest. Just to note for all you Flash fans out there, this is not an episode of The
Flash, but rather a part of a whole. Unlike last year’s crossover wherein every episode was the title character’s (or characters’) episode, this was a truly team effort and made this all the more satisfying. This is the Arrowverse at its finest. 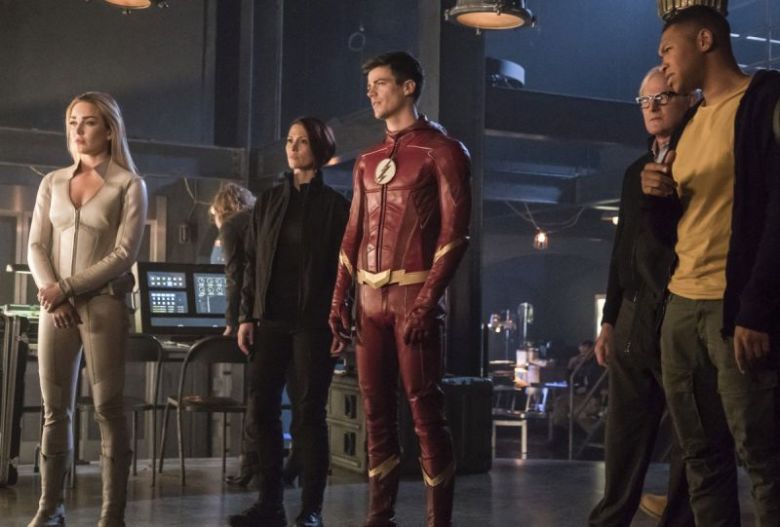 With Barry (Grant Gustin), Sara (Caity Lotz), Oliver (Steven Amell), Alex (Chyler Leigh), Jax (Franz Drameh), and Dr. Martin Stein (Victor Garber) all wake up in a Nazi concentration camp on Earth-X (the Earth where Nazis reign supreme) after being rendered unconscious by Metallo. They’ve been collared so their powers aren’t working which is bad as they need a way out ASAP. Making things worse is the Sturmbannführer is Quentin Lance’s (Paul Blackthorne) Earth-X doppelgänger. Just as he orders our heroes to the firing squad along with Ray Terrill aka The Ray!!! (Russell Tovey). Leo Snart (Wentworth Miller), Earth-X’s Captain Cold swoops in to save the day and free our heroes.

Once back at Snart and Ray’s hideout, Earth-X’s doppelgänger of Winn (Jeremy Jordan) and leader of the freedom fighters wants to blow up the portal our heroes need to get through to get back to Earth-1. Unwavered, Winn sends the Red Tornado (!!!) to destroy the facility holding the portal. In a race against time, our heroes must enter the base, defeat the Nazis guarding the base, and get back to Earth-1 before it’s too late.

Speaking of Earth-1, with everyone trapped in the metahuman cells that Team Flash usually uses, it’s up to Iris (Candace Patton) and Felicity (Emily Bett Rickards) to call the Legends for back up as well as save Kara (Melissa Benosit) from an operation that will end her life.

Watching all four episodes, this is what I wanted from Justice League. The team is all familiar with each other and the teamwork done is incredible as we see the heroes across four shows work together. This reminds me of why Marvel has been killing it on the film side of things. You get invested in the main character as well as their individual stories which can then lead to a bigger world where heroes can collide together.

Plus, there are real stakes in this crossover. Part 3 ends on a dire cliffhanger that has real consequences for everyone going forward. Sure, I saw it coming as the actor had announced he was leaving the Arrowverse after the show’s premiere as well as the set up all season long (and this crossover really drives the fact home that he’s leaving), but still, it hurts. 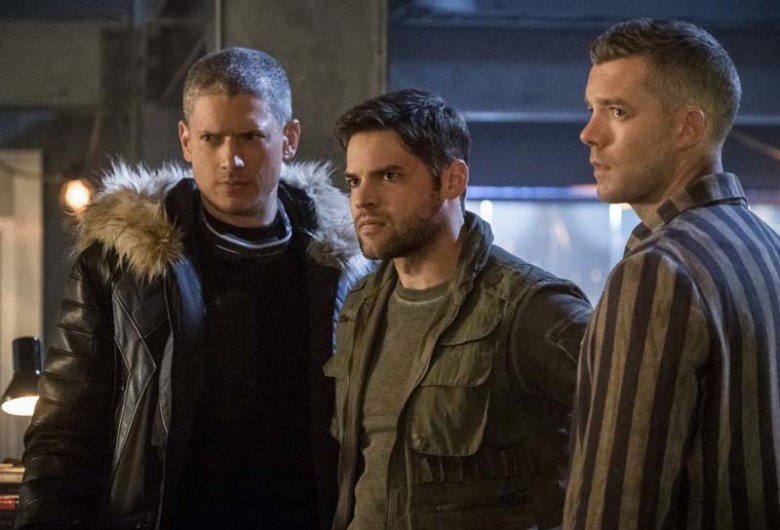 A big problem I have with this crossover event is that the writers feel they had to bring back Eobard Thawne yet again. Seriously how many time are they going to pull this character out? He died on The Flash and he died on Legends. We don’t need him popping up again in the future so the writers can pull him again whenever they feel like it. Everyone has complained that the writers are too reliant on evil Speedsters and this crossover has really driven home that fact.

With the way our current events are heading, we’re humanizing Nazis in real life which is scary as we are literally two steps away from Earth-X from becoming a reality. It’s nice to hear the good say “I hate Nazis” in the face of rising white nationalism. What’s more is The CW and these show’s respective writers have people of color as well as gay people as heroes. This is something even Marvel has yet to do with their films. The newest member of Team Legends is a Muslim. This is so awesome as Muslims are being persecuted due to the now current administration (for those of you reading this years from now, this all went down in 2017 going on 2018. I implore you to do better than this current embarrassing times).

For sure this is the weakest episode of the four-part crossover. And yet, when you have the Red Tornado pop up as well as introduce The Ray and make him feel whole is an accomplishment considering this crossover is jam-packed with heroes as is. Bringing Snart along is genius as well. I have a feeling we’re reaching the end with Wentworth Miller in the Arrowverse. This is a fitting way to give him one last arc in his current iteration. I’m glad that this is now an annual thing with these crossovers happening every year since The Flash’s inception. Whether it’s with Supergirl or Arrow, these things are always fun to watch. The actors always seem to be having the time of their lives during these events. My biggest concern is how exactly do they plan on topping this crazy, ambitious event that worked? 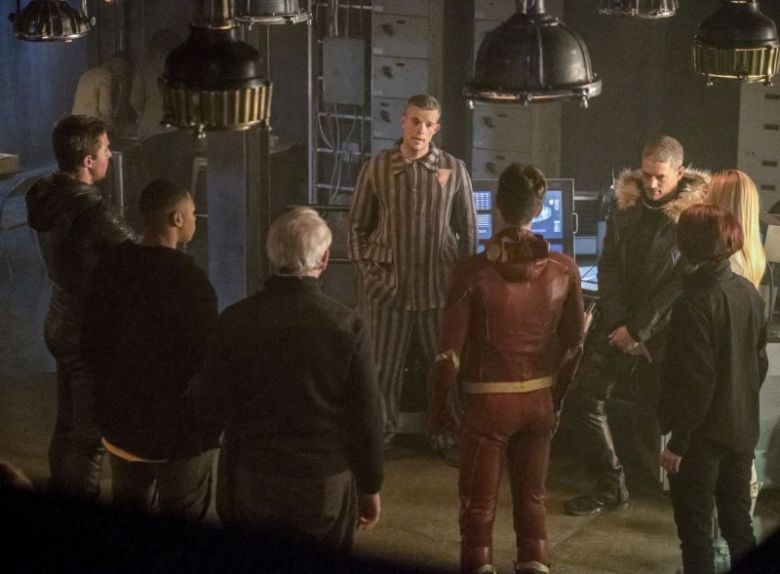 I sincerely hope Warner Brothers and DC Films is taking note of “Crisis on Earth-X”. The fact that this takes Justice League, which should have one of the simplest alley-oops in film history, bends it over its knee and spanks it, is really telling. There’s more care about the characters (and better fight scenes) going into CW shows that a multi-million-dollar franchise. For shame.