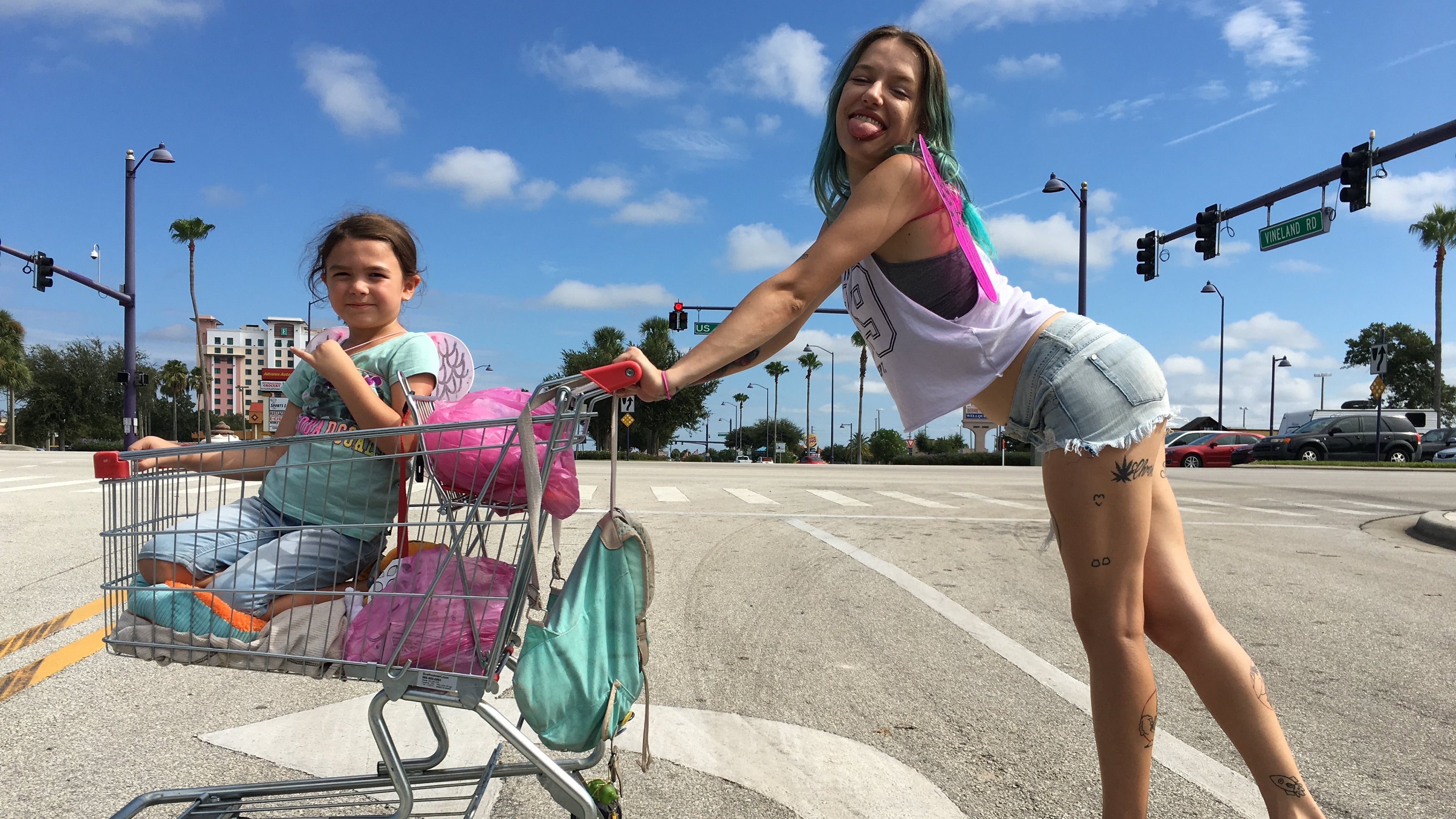 What is it that we mean when we call something “heartbreaking”?

It is a word I am sure I overuse. But honestly, it is something that I feel on a regular basis, and the older I get, the more pronounced it becomes. I try to live my life with my empathy turned up to high. It’s important to digest filmmaking that way, but I think it’s just as important to live your life that way. When you do that, though, you’re inviting in all the shared hurt that the world has just waiting for you, and I really don’t have much armor to protect me from that sort of thing. When I watch a film like Sean Baker’s remarkable new The Florida Project, which is an exercise in putting you into the shoes of someone you might otherwise never consider for a second, I find myself absolutely spent from the emotional workout. And, yeah, my heart is broken for a little girl who does not exist, and who I could not help even if she did.

Moonee (Brooklynn Prince) is six years old. She lives at the Magic Castle Motel, a complete and utter shitbox nestled between two other complete and utter shitboxes as part of a long strip of complete and utter shitboxes designed to house the people who somehow make a living off the fumes from the armies of tourists who show up for Walt Disney World and Universal Studios. Her mother Halley (Bria Vinaite) is basically a child herself, utterly without any idea how to navigate functional adulthood. What Baker does that is so magical is he drops you into the life of this essentially homeless little girl, living well below the poverty line with a mother who seems to have no boundaries at all, and he somehow makes it joyous for much of the running time. Moonee is not a little girl suffering every minute of every day. Hell, she’s a wild animal, off the leash and loving her freedom, raising hell, talking back to anyone who challenges her, and absolutely hilarious. Prince is an incredible natural actress. She doesn’t play a false note in the entire film, and she’s onscreen for pretty much every second of the running time.

Moonee’s got her friends who she runs with every day. There’s Scooty (Christopher Rivera), her closest buddy, as well as the new girl Jancey (Valeria Cotto), who they meet after they cover Jancey’s grandmother’s car in spit one day. Even though they are without any direct supervision most of the time, the manager of the motel, Bobby (Willem Dafoe), can’t help but keep a watchful eye on them whenever he can. They torment Bobby for pleasure, and Dafoe is terrific at playing off of the kids. He manages to play all of the frustration and irritation while never losing sight of the fact that they’re kids. There’s a sweetness to Dafoe here that you don’t often get to see in his film work, but not overdone. 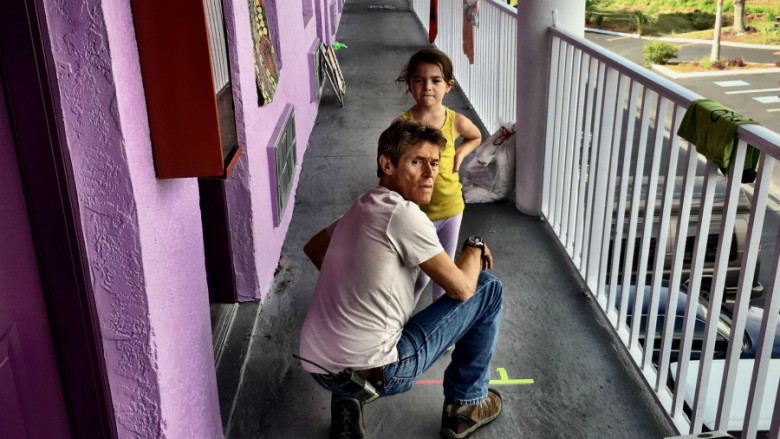 Moonee and her mother are just barely getting by, and Halley’s slow slide towards absolute zero is this running thread of low-key dread throughout the movie. There’s something beautiful about the films that Sean Baker makes and the people he chooses to focus on in those films. In Starlet, he gave dignity to two women who are marginalized in very different ways, a sex worker, and an elderly woman. In Tangerine, he dove into Hollywood street culture in a way that was both hilarious and unflinching. These are people who most movies would never pay attention to, much less push front and center, and that’s the point.

I spent much of my life in Florida. I lived there from age 3-10, and then again from 15 through college, when I went to Florida State. My favorite writer’s favorite subject was the state of Florida. It is a fascinating social experiment run wildly out of control, and if you’re looking for the marginalized, I’m pretty sure they appear on the Florida state flag. It’s a place where detritus washes up on the beaches and also makes up a pretty solid percentage of the population. And that’s not a judgment. It’s just an observation. The Orlando area, in particular, seems to be a magnet for these sort of low-grade low-skill hustlers who are holding on by their fingernails. And again… that sounds like a judgment, but it’s not. It’s sort of the perfect environment, rich with tourists who show up, pockets positively overflowing with disposable income waiting to be disposed of, and all Halley wants is a taste, the crumbs from the bigger cookie. She doesn’t have any illusions about whether or not she’s ever getting the cookie. She knows that’s not the hand she’s been dealt. All she wants to end each day with her own safe place to sleep for her and for Moonee, the both of them with their bellies full. Florida sells this image of sunshine and beauty, and what The Florida Project gets right is the way that beauty is a very real thing, and it shines on so much that is so ugly.

Moonee doesn’t know that, though. She’s six. She doesn’t know she’s poor. She doesn’t know she’s essentially homeless. She doesn’t know anything except joy and freedom and this life without boundaries. You need food? Well, there are free waffles at this place. You need ice cream? Just ask enough people for change. Moonee follows her impulses, and I never want to know how Sean Baker got this performance out of her. I would imagine there was improvisation and play involved, but there’s real nuance. Those moments where the dirt of the world does get through to her, where she is touched by sorrow or pain, are bracing and terrifying because it clearly takes so much to do that. Halley may love Moonee, but she’s not a fit parent. Even so, the film makes it clear how hard it is to root for someone’s child to be taken from them. There’s an inevitability to The Florida Project, but that doesn’t make it any easier to watch it play out. 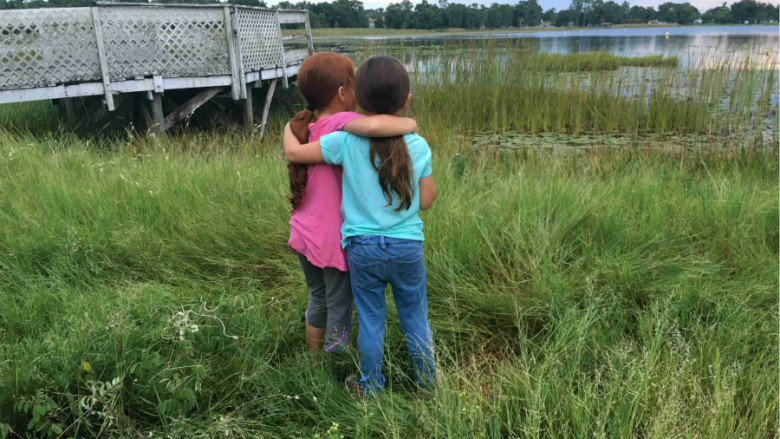 There are lovely grace notes played by recognizable faces like Caleb Landry Jones and Macon Blair, but for the most part, this film belongs to the non-professional leads. Alexis Zabe is a profoundly talented photographer. His work on Silent Light and Post Tenebras Lux, for example, already demonstrated an eerie ability to sculpt mood and to push even the most natural settings to a surreal place. So often, people equate great cinematography with “pretty pictures,” but that’s not it. It’s more than that. It’s about somehow capturing a feeling, making real something that isn’t. I know this is a movie, and that Moonee and Halley aren’t real, but in creating them, Sean Baker has captured something deeply true, and these images are spilling over with life, unruly and hard to categorize from one moment to the next. It is a major film about minor lives, and by the time it builds to those exhilarating, emotional final moments, it earns this moment of commerce-made-poetry. For once, instead of leaving me heartbroken because of hopelessness, a film like this dares to suggest that even this powerless little girl can find power in friendship.

It may be easy to ignore all the real-life Moonees and Halleys out there, but The Florida Project gives urgent, gorgeous voice to these characters, and I hope Sean Baker stays true to his gift as he keeps bringing us these vital reports on the people so few filmmakers dare to feature.