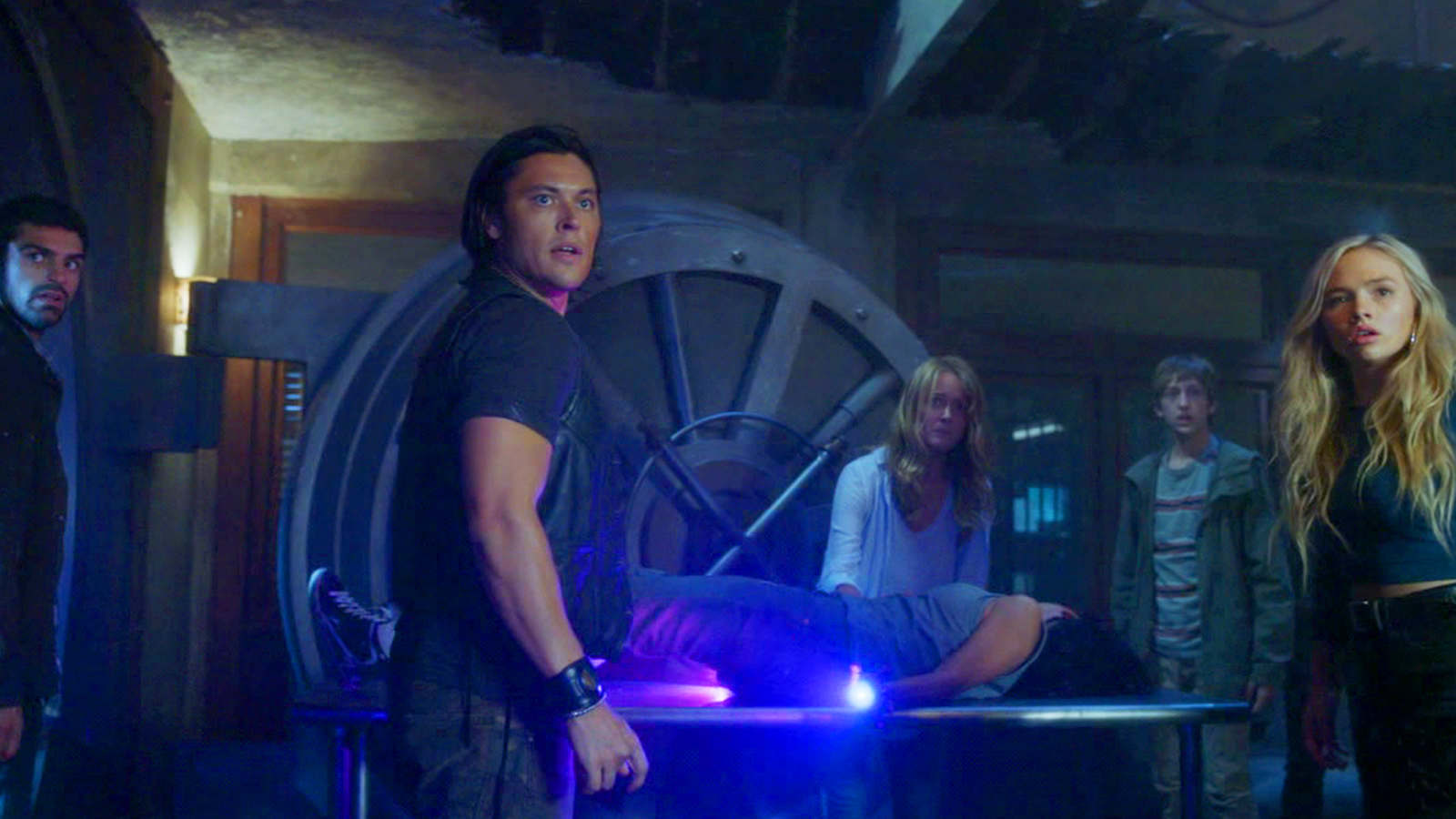 The Gifted uses its second episode, “rX,” to better establish character while also strengthening its narrative through creative uses of superpowers and a more goal-oriented plot. It’s a nice breather from the breakneck pace of the first episode and allows us to get to know everyone while giving each of them decisions that offer opportunities for growth.

First off, I absolutely loved the structure of this episode. It’s beautifully paced and flows well, weaving the different plots together effectively while still keeping the tension present through each narrative. I’m much more impressed with this episode than the first one, especially in how it uses the particular elements of an X-Men tale. Blink (the mutant who can open portals) is sick from overusing her powers and she starts accidentally opening portals that she can’t control. The superpowers in general were fantastic here. Blink demonstrates that their are consequences for being able to use sci-fi magic. Lauren and Andy use their powers to try to counteract the unintentional damage that Blink is doing. Eclipse (the volatile mutant who shines light out of his body) uses his power as a cover at the emergency room to help him and Caitlin steal drugs for Blink. All of the powers are essential for the plot of this episode rather than being features in bland action scenes or reasons for flashy special effects. Practical uses of superpowers are my favorite, so I’m glad that The Gifted shifted out of action-gear and into a more practical mode immediately. 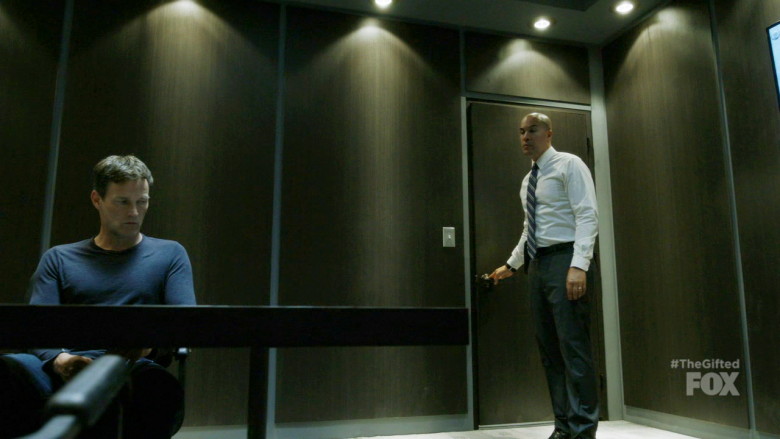 Now, I have personal problems when it comes to stories about “family.” Oftentimes, everyone in the family hates each other and treats each other terribly but then the narrative insists that they all love each other. Sometimes one or two characters are the focus and everyone else is obnoxious and just there to get in the way. So far, The Gifted has avoided all those tropes that I hate. The kids Andy and Lauren are both mutants while their parents are not. Andy and Lauren are teenagers and have to deal both with regular teenage horrors and with their mutant abilities. I still love how well they’re keeping the relationship between the two of them civil and loving but not without points of low-level sibling tension. Since this is an X-Men show, you’d expect the mutant kids to be the focus and yet their parents Reed and Caitlin are just as important to this story overall. Reed has made his career prosecuting mutant cases and now finds himself on the other side of the table. That’s to his advantage because he knows how those kinds of cases work and can figure out what he can bargain for because of it. I like how morally ambiguous Reed is in that he keeps bargaining for his family’s safety at the expense of the people who are trying to help him. He can’t seem to square his adherence to the letter of the law with the suddenly very personal civil rights issues he’s having to deal with. Caitlin is the real star of this episode, and since Amy Acker is the main reason I signed on for this ride I couldn’t be happier. Caitlin is a nurse and immediately tries to help Blink when she sees she’s in pain. Caitlin first has to believe in herself, then steal the drugs she needs, and finally leap into a dangerous situation to save Blink and everyone else in the Mutant Underground from harm. She was already my favorite but the way she goes through plausible self-doubts and comes through the hero gives me justification for my favoritism.

Another excellent element of this episode was how well it explored the underlying civil rights issues related to mutants. Reed, of course, was tackling the justice system and Sentinel directly, but Caitlin also got a taste of what mutants have to deal with just to try to get by in life. The way both she and Eclipse were treated like criminals at the hospital opened her eyes to the difference between the law as written and the law as interpreted. The anti-mutant prejudice is present and active but not overplayed as it’s clear that mutants could be a danger and lawful restrictions might be reasonable. However, in practice all mutants are treated as dangerous under the law which is illustrated well by the Sentinel agent who tells Reed the story of his daughter’s death caused by mutant powers. The complicating factor is that powers are often a manifestation of teenage angst so you’ve basically got kids who are already having issues now dealing with even more issues and suddenly being hunted just for being themselves. Emotions run high. I like the way that The Gifted is playing those angles in this episode. 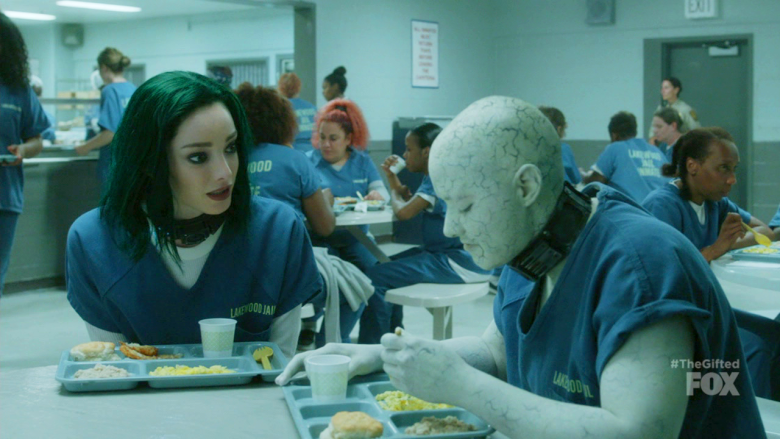 There were only a few things off with this episode but they were so minor as to be mostly unnoticeable. A few of the mutants in the Underground were people we had never met who weren’t introduced and suddenly had important speaking roles. If they were introduced before it was so glancingly that I don’t remember them from last week which isn’t good enough. The one other complaint I have is that the sterile laboratory scene at the end is clearly supposed to be a creepy hook for future conflict. The problem is that we don’t know the menacing scientist (I’m presuming he’s a scientist from the traditional mad science lab coat), have no idea what this lab does, and the reference to previous sibling mutants as ominous foreshadowing is ineffective if we don’t know what those mutants did or what the scientist intends to do with them. I hope they explain it all in the future, but even so the scene is just tacked onto the end of this episode like a bad try at a Marvel tag. I’m also still weirded out by the Polaris-pregnancy subplot. It feels so unnecessary and reductive. I definitely have my judge-y face on whenever they drag it out without letting Polaris even have feelings about it.

All in all, “rX” is a solid second installment and a much better launch pad for the various stories and characters that The Gifted has on offer.