Lodge Kerrigan and Amy Seimtz, the creators of The Girlfriend Experience, have gone their separate ways for the show’s second season. But not in the way you might think. While they worked together on each episode of the Riley Keough helmed first season, they’re each telling their own unconnected stories this time around – airing back-to-back each week.

Kerrigan’s Washington D.C. based tale is up first. The opener “Leverage” introduces us to Erica Myles (Anna Friel) and Anna Greenwald (Louisa Krause). Erica is the finance director of a Republican super PAC who is feeling the pressure to meet her fundraising goals in the run-up to the 2018 mid-term elections. When she hears about a secret dark money network she is determined to find a way in – which is how she becomes involved with Anna: a Girlfriend Experience provider who has been seeing Mark Novak (Michael Cram), the director of a right-wing non-profit and a fan of rough and degrading sex. After Novak calls Anna a slew of offensive names and grabs her neck during their rough tryst in a bathroom, she secretly records his phone calls. Erica gets word of the tape’s existence – and buys it.

Realizing this could be the answer to all her fundraising problems, Erica arranges to meet with Anna. She offers her money to keep recording Novak – although the exact amount will depend on the material she manages to get. Erica wants the good stuff; anything she can use to blackmail Novak and gain access to the secret donor network. 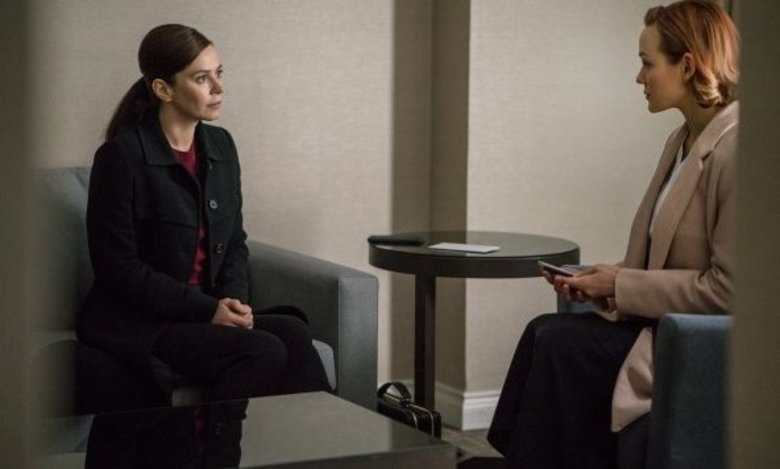 Anna immediately steps up to the challenge. She meets with a former GFE provider, Jo (Gillian Williams), who is struggling with her decision to quit the profession for the sake of her relationship. Anna suggests that Jo join her when she next meets Novak on Friday – he had requested that she bring a friend, and maybe this is the perfect way for Jo to test out the idea of getting back in the game.

While Erica spends most of the episode in glass-fronted boardrooms talking to men in suits, we do get a brief glimpse into her personal life – when she meets up with her ex-girlfriend Darya (Narges Rashidi). Erica still isn’t over their break-up and is looking for answers, but she doesn’t get any – all she gets is her keys back. Left alone in a restaurant, she returns home and pops a few pills. 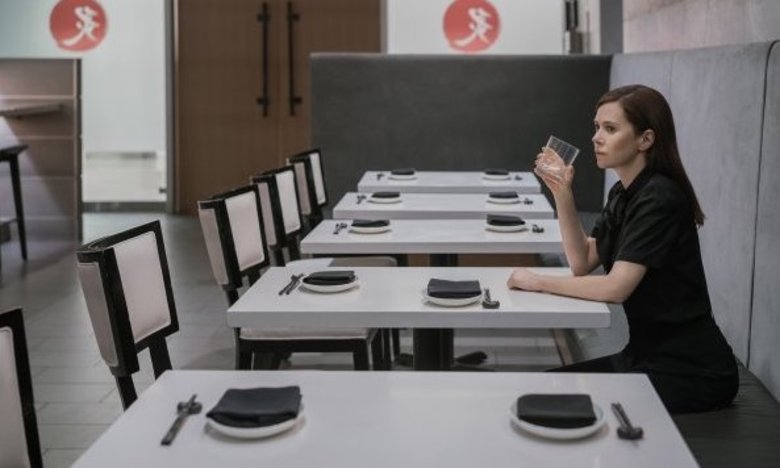 Although The Girlfriend Experience has decided to follow the anthology format this time around, the story of Erica and Anna doesn’t feel like that much of a jump from Christine’s story in season one: once again viewers find themselves in a murky world where the sex is harsh and the relationships are void of emotion. The tone and setting also feels very similar. Erica and Anna’s story is shot with an almost clinical precision. Their world is crisp, clean and uncomfortably cold; full of large, clutter-free rooms and leather furniture.

Both Anna Friel and Louisa Krause are fantastic as Erica and Anna respectively. Erica is the slightly more intriguing of the two, only because the professional Erica and the personal Erica seem like different women. It will be interesting to see how the lines between the two begin to blur as the story progresses. On the other hand, Krause’s Anna is unreadable; she appears still and calm no matter the situation she finds herself in. We have no idea how she ended up in this world, but we do know that she’s good at what she does. She’s smart and self-assured – and far from naive: she knows what type of men she’s dealing with – which is clearly shown when she quickly agrees to be a part of Erica’s blackmail plot, telling her that she’s willing to take the risk because Novak is a misogynist who deserves everything that he gets.

Kerrigan and Seimtz created a show that was nothing like anything else on TV with the first season of The Girlfriend Experience, and it seems as though Kerrigan’s half of the second season is going to continue exploring the same themes in the same manner as the original 13 episodes. That isn’t necessarily a bad thing, but the format of this season means that Erica and Anna’s story only has 7, 30-minute episodes to play out. The narrative of the first season moved in a way that the audience wasn’t used to, because there simply wasn’t enough time to use the storytelling devices we’ve become so accustomed to watching  – and while I loved this during season one, I’m intrigued to see how Kerrigan is going to continue pushing the boundaries of TV storytelling this season with such little time to play with. 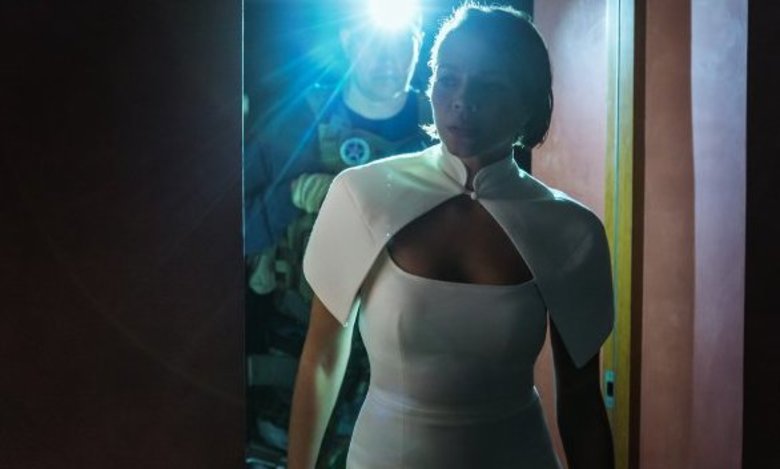 Seimtz takes over for  “Admitting” – the first installment in Bria’s story, which is set in New Mexico and opens with Bria Jones (Carmen Ejogo) being lead away by U.S. Marshals with her protesting teenage stepdaughter, Kayla (Morgana Davies) in tow. A few scenes later we’ll learn that these are not their real names – but the names they choose for themselves when they enter the Witness Protection Program. Bria has agreed to testify against her boyfriend, Donald Fairchild – who she met when she was working as an escort. It’s evident that there is no love lost between Bria and Kayla, and Bria even goes as far as asking that the 13 year old be placed in foster care. 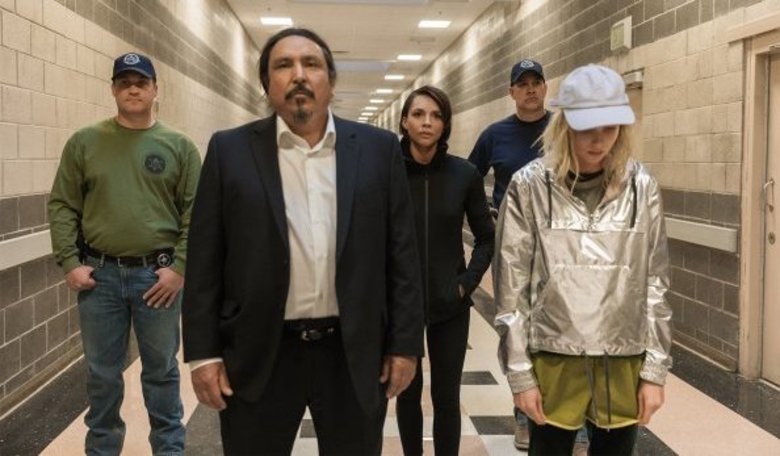 U.S. Marshal Ian Olsen (Tunde Adebimpe) is assigned to help Bria with the transition. He tells her that she’s going to have to lie to a lot of people – but asks her not to lie to him. Before leaving for her new life Bria is forced to ditch her glamorous clothes in favor of something more on the drab side.

Bria and Kayla arrive at their new home – which is in the middle of the desert and just 140 miles from Donald, who can’t be arrested yet because a federal case against him can’t be brought until Bria testifies. Olsen gives Bria a cell phone, but tells her that she can’t have internet access in the house for the first few months.

Using her well practiced lies, Bria gets a job at a factory. She stops by a local store with internet access and logs onto a sugar baby website, before going home and changing into the white outfit she was wearing when she handed herself over to the U.S. Marshals. She sits on the couch and drinks wine, while Kayla yells abuse at her. Olsen checks in at the house every day. Bria cuts one visit short, saying that both she and Kayla are tired – when she really just wants rid of him so she can take pictures of herself in the white outfit; pictures she uploads to the sugar baby website after walking out of her monotonousness job at the factory. 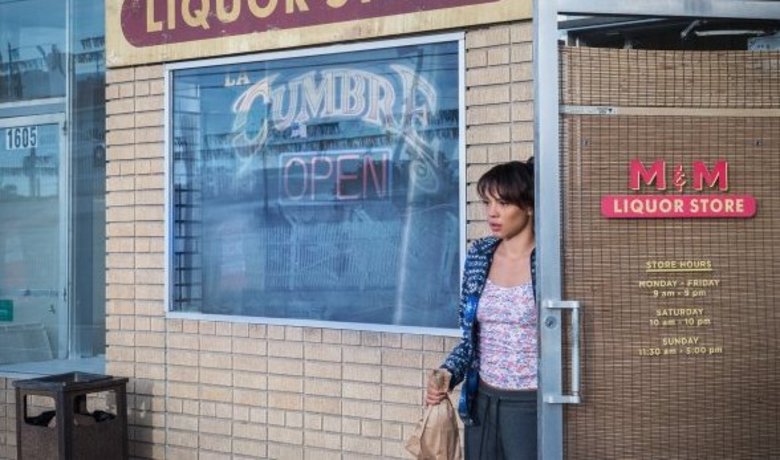 Later that night Bria gets a call from Paul – a user of the site she contacted earlier. She quickly turns the conversation sexual; but even though we don’t hear what Paul is saying, it becomes evident that he’s not ready for things to go down that road quite yet – much to Bria’s disappointment. But they do agree to meet. And when they hang up, she watches in the mirror as she touches herself.

Visually, Bria’s story is a real break from the show’s first season, and Kerrigan’s half of the second. Seimtz has beautifully captured the dull drabness of Bria’s new life. Bria is a complex woman who has found herself being forced to be something she isn’t: a mother, a blue collar worker, the happy inhabitant of a small town. But Seimtz faces the same issue as Kerrigan, she has a very limited amount of time to tell this story – and so Bria doesn’t even manage to keep up the facade for the entire first episode. However, this is actually the most fascinating thing about Bria – she misses her old privileged life, the life in which she was in a relationship with a man she thinks may have killed his daughter’s mother. She doesn’t seem all that grateful to have escaped – and neither does Kayla. This is what The Girlfriend Experience does best; it examines the dangerously seductive power of money and everything that goes with it.

Kerrigan and Seimtz may be working separately on this season, but the two very different stories they have created manage to compliment each other perfectly. They’re both pulling the audience into worlds they don’t understand, which are full of female characters who don’t fit nicely into any of the stereotypical boxes – and it certainly makes for compelling TV.