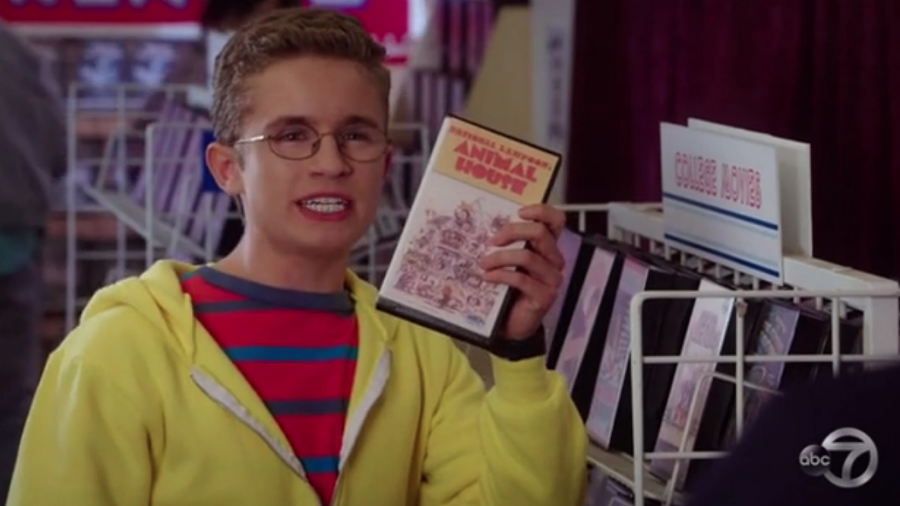 Adam gets to go to college on this week’s episode of THE GOLDBERGS, “Revenge O’ The Nerds.” The season continues to play out strong as this week Adam and Erica pair up at Erica’s college and Beverly and Murray go head-to-head in a delightfully rare pairing, where we actually get to see their dynamic as a married couple comes into play. The episode makes for a very entertaining half hour, where we get to see yet again what The Goldbergs does best: funny families, heart, and self-aware 80’s parodies.

Before I jump into the dynamics of the main story arcs for this week, I’d like to give a quick shout out to whoever thought up the idea of Barry trying to perm his hair. It’s so random and absolutely ridiculous that it works on a hilariously high level. I mean, the absolute absurdity of Barry perming his already very curly hair is beyond hilarious. I understand why the joke of the storyline then had to be that his hair doesn’t change (because honestly, it’s so curly already, would we even be able to tell?) but I kind of wish we had been able to see what an even curlier Barry would have looked like. Though his friends perming their hair was a great alternative, I do have to say.

The main arcs of the episode focus on Erica’s relationship with Adam, and Beverly’s relationship with Murray, as disguised by Erica trying to stay ahead in college, Adam wanting to experience college, Beverly having her midlife crisis, and Murray trying to keep things from changing. While the antics of the episode are fun – Beverly gets a terrible perm, and Adam and his friends try to live out the ‘college dream’ as played out to them in movies – the best parts of the episode are the pairings and getting to see what plays out between these characters. We don’t often get a lot of Erica and Adam pairings – it’s usually Erica and Barry, or Erica and Beverly – and same with Beverly and Murray – Murray usually takes a backseat to Beverly and one of the kids. This was nice because we got to see and understand a little bit more about the dynamic of the relationship between Beverly and Murray, which is something I’ve wondered about before.

It was also nice getting to see Erica play big sister to Adam because this isn’t a side of her character that we get to see as often. It was also nice to see a side of Adam eager to hang out with his big sister, as that’s not a side of him that we get to see all that often, either. Usually, he’s just wanting to live out his fictional daydreams inspired by the movies he sees. Which, obviously, is part of the reason why he’s motivated to visit Erica at college, but it’s clear that he’s also motivated to visit Erica at college because he looks up to her, and aspires to be more like her. As a younger sibling, it’s a very genuine and relatable aspect of Adam’s character and this episode overall.

And again, it was nice to see the show call out the more sexist aspects of the movie it was parodying. Revenge of the Nerds is notorious for its depiction of women as objects to be obtained or earned, rather than people to be respected. As Adam and his friends head to the sorority party where Erica is supposed to be performing, I was really worried that they would go through with the panty-raid, just like in the movie, as though it isn’t a big deal. However, I, of course, should have had more faith in the show, as the last few episodes of this season have given me no reason to think that they wouldn’t address the more sexist aspects of the things they’re parodying. And, I was happy to see that they did address the panty raid as being a strange, uncomfortable violation of people’s personal space and property and worthy of calling the cops on.

I’m genuinely loving The Goldbergs’ take on 80’s pop culture sexism. It’s a great example of how we can address these things in an easy-going manner that doesn’t take away from the importance of acknowledging these things while also not making the show feel preachy. I hate that we still live in a culture and society where people are only willing to listen if it doesn’t feel like someone is trying to teach you something, but I guess you have to work with what you’ve got, and The Goldbergs is certainly doing that.

Five seasons in and this show is still one of the best comedies on TV. Here’s to a continuing strong season!