The Good Place has switched the game up on us plenty of times: at the conclusion of Season 1, midway through Season 2 when Michael decided to aid the humans he was supposed to torture, but probably never has it had such a hard reset as now. The world as we know it of The Good Place is no more: it’s literally vanished, its colorful pieces chipping off and flying away into nothingness. It’s another extremely bold move by our show’s creators, who have innovated a universe with both flexible and rigid boundaries that they have manipulated with almost as much blase whimsy as Michael himself. The show is a wild ride, no doubt, and it feels like we’re sitting next to our characters on the rollercoaster.

A new rollercoaster (in real life, a quasi-interdimensional train) is about to start, or rather, tumble down its first steep decline into the unknown future. As the group must reconcile with the fact that Michael has deceived them again (no, they don’t get a gold hot air balloon to the actual Good Place) and that endless, brutal torture may be imminent in the Bad Place, they decide to take a final evening of celebration to process and make some slurred toasts–a “last supper”, so to speak. We get a reminder of the tender yet complex relationship between Chidi and Eleanor, as they slow-dance somberly together; Michael clearly rejoices in a box of boring, pointless human gifts that seem to touch his (non?)soul. His reactions to each highly earthly gift, each one more mundane than the last, are priceless (“A stress ball with a dumb corporate logo… I can’t wait to keep finding this, and then almost throwing it away, and then thinking, ‘Nah, I’ll use it.'”) It’s only when Tahani, whose M.O. on Earth was to always talk to the manager, gets the idea to bring that sentiment to the Bad Place that the conversation turns into another scheme. If there’s one thing the gang is good at, it’s coming up with a way to (attempt to) weasel their way out of what seems the inevitable. 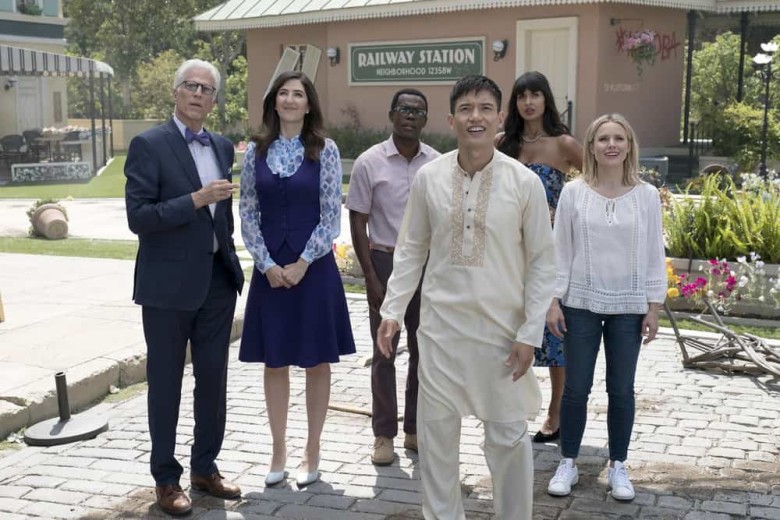 According to Michael, if the group makes it to the Bad Place, they have to both reach and pass through the portal to the Good Place, which so conveniently happens to be located at the very center of headquarters, then convince a Shawn-like judge to listen to their “unwinnable” argument. Eleanor, in typical leader form, burps, raises her bottle, and commits the group to what seems to be a futile plan. It’s true, however–they have nothing left to lose.

What made this episode a notch above the rest–which are already excellent, provocative, and creative–is that now, our season has taken a turn for yet another reality that our characters will have to confront with absolutely zero background information. It’s clear, based on their expressions as they look wistfully out the window at the “Good” Place disintegrating, that they’re a little bit sad about their former “hell” disappearing–and naturally, so are we. After all, who knows what will become of them, ultimately? Most of us would argue that the type of torture they’ve been told about won’t happen to them–it’d be an odd turn for a show that likes to promote redemption as a theme. There’s a good chance, however, that our show could take a dark turn, e.g. someone won’t make it–or Michael will be separated from his human compatriots.

“Is that how you think people meet?” – Eleanor, laughing uncontrollably at Chidi theorizing with her how they could have met in the real world–at philosophy conferences, in a philosophy class, etc.

“I call balloon shotgun!” “What does that even mean?” -you guessed it, Jason and Chidi, as they see their false ride to heaven descending from the skies.

Again, Michael relies on an earthly technique to shut down bad Janet–his trusty paperclip to the jawline, and she disappears into a tiny marble.