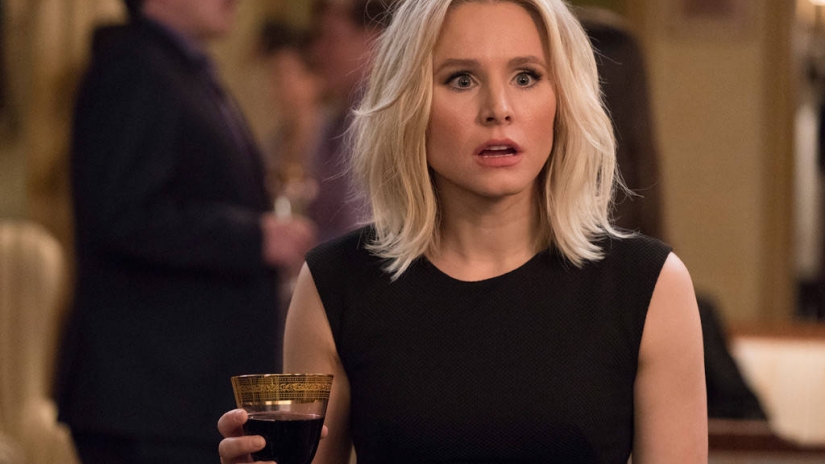 Back in 1992, Albert Brooks made and starred in a film called Defending Your Life, which envisioned the afterlife as a sort of idyllic purgatory, Judgment City, that resembled something in between a hotel and a courtroom. Everyone wore plush white robes, it was always seventy degrees and sunny, and a touch of whimsy pervaded every scene. For example, guests could eat as many hot dogs as they want and, as Meryl Streep’s character Julia puts it blithely, “feel great!” The film’s intrigue derived mostly from its concept, but also how it tackled deep, spiritual themes through a contemporary lens, with enough amusing moments (e.g. Brooks careening down a hill, unable to stop a snowmobile) to keep it in the “comedy” section at Blockbuster (RIP).

“The Good Place” has taken a similar, universally fascinating idea – that of a realistic purgatory with subtly fantastical elements – and run into new, digital, technicolor territory. In the first season, we delighted in the various imaginative facets of this universe: pre-designed, tastefully decorated homes for residents; a brutally mediocre “Medium Place” inhabited by one person (manically and perfectly captured by Maribeth Monroe), a holographic scoreboard showing residents’ “points” for good deeds, and Eleanor (Kristen Bell)’s bad deeds manifesting as trash storms or burning plants. The shocking reveal of the finale pulled the mask off Michael (Ted Danson), who is actually a conniving demon testing out a new afterlife-universe scheme, thanks to his promotion to “architect” in an underworld design firm. The victims he had chosen to test out his new plan: the sarcastic, surly Eleanor; nerdy, well-meaning Chidi (William Jackson Harper); gorgeous yet patronizing Tahani (Jameela Jamil); and moronic EDM-head Jason (Manny Jacinto), who all suddenly discover that they’re all “bad people,” or at least bad enough to be passively tortured by Michael and a cast of about 200 Bad Place employees. Wednesday’s premiere episode is markedly quicker-paced than its preceding ones, due ostensibly to Eleanor’s sense of urgency to find out what the fork is going on. Before her memory was erased by a snap of Michael’s fingers, her mix of keen intuition, problem-solving skills, and intelligence led her to tuck a note in Janet (the human Siri)’s mouth: “Find Chidi.” Considering that these were the only redeeming traits she had, it’s poetic that she’s now used them to literally fight evil. Now, even brain-wiped Eleanor won’t rest until she finds out why she wrote that note, what exactly is off about this place, and who/what is “Chidi” (“a soup”, she wagers at one point).

Because we’re already familiar with the world of the false paradise, but now see it for what it really is, its brightly colored furnishings and sparkling green landscapes are no longer in stark focus. Now, we get to see the behind-the-scenes conversations that Bad Place employees have had all along, and Michael’s utterly nasty character is exposed. Since we now know that soulmates were deliberately poorly matched with our four characters in order to maximize psychological torture, the emotionally distant gym-rat Chris “destined” for Eleanor is hilarious as a spot-on intentional mismatch, and the short-in-stature Tomás makes Tahani instantly self-conscious. The self-sabotaging, indecisive Chidi makes a choice about who he wants to be his soulmate, only to have that decision annulled by Michael, who rushes in to declare an “error” and reassigns him to the most vapid character yet introduced on the show. Watching them cope in these uncomfortable spots is as painful in its relatability (awkward date feels heightened x100) as it is entertaining. As our protagonist and her associates were scrambling to avoid being found out last season, it’s satisfying to watch Michael and his minions now haphazardly attempt to “put on” around the characters they are told to torment. Their inability to do it carefully, though, and preserve the second round of the scheme, is a testament to their lack of patience with Michael, and it reads strong enough to out him to our heroes a second time. When the former “real Eleanor,” now “Denise the pizza lady,” drops a slice of Hawaiian pizza on a plate and walks away rudely, her resentment at not having a “better character” like real Eleanor (“I feel like I really got her”), is clear. The compulsively shirtless Chris can’t come up with a better excuse under pressure than “I’m goin’ to the gym!”, which confounds and frustrates Michael (“Why would you say that in the middle of a party?!”).

Now that head demon Michael’s plan has failed again, he has put himself in a terrible position in his department, having lied to his underlings that his superior Shawn has approved another try, and to Shawn that things are hunky-dory. The next episode portends an intensifying battle between Michael and our beloved “bad people”: Michael, for his own power, credibility, and avoidance of extreme demon-on-demon torture, and our heroes, for at least another shot at landing somewhere outside of The Bad Place.