Taking a long breath to analyze one connection between just two characters has not been “The Good Place”‘s modus operandi. The plot has been driven at an almost-breakneck pace, and we’ve always been about one step behind. So when people started guessing that Janet’s glitches during Jason and Tahani’s therapy were a direct result of her residual love for totally babin’ airhead Jason, it seemed like one of the first times that we viewers have outran the ball to the base. And indeed, those people were right: Janet’s inability to feel authentic happiness for Jason and Tahani, due to the sophisticated level to which she’s evolved, has caused her to lie, and it is totally screwing up the world she herself had created (design credit, of course, to Michael).

Two non-humans grappling with how to keep a universe intact is already highly conceptual for a sitcom, but seeing these two struggle with processing human emotions like jealousy and guilt is downright fascinating, even if the action has to slow a little bit. After Janet nonchalantly tells Michael she needs to be self-destructed, we see Michael ultimately decide not to kill her, simply because it’s (gasp) wrong to kill a friend–and he feels like she’s been the truest friend to him through 800 reboots. Janet obviously can’t comprehend, prior to Michael’s guidance, that he actually feels shame about pulling her plug (or rather, pushing down her nose and inserting a paperclip in a hole behind her ear–a clever nod to other hard shut-down technology techniques).

Perhaps it’s been Michael’s training in ethics classes, in which case his feeling bad about killing Janet is, of course, growth–but whether we actually want to see that growth is another question. If Michael transforming over time into a better person (I mean–eternal demonic being) is a process, that does conceivably leave us with some dead ends by the end of the season. What’s inarguable is that in this chapter specifically, Danson and Carden have showcased their superb talents–Carden at playing the blissfully ignorant, quasi-human quasi-robot role perfectly, Danson at shifting gears constantly within every episode. 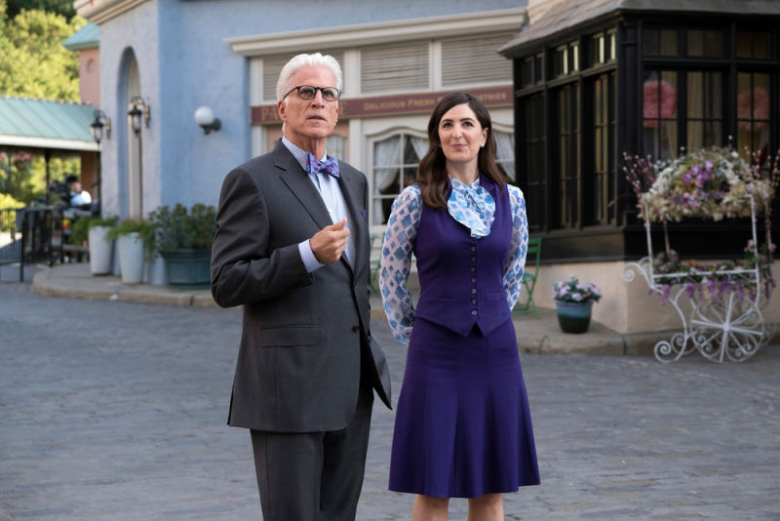 Another remarkable performance from the abhorrent Vicky (Tia Sircar) proves just how unimaginative and awful she and the other demons are. Her idea of simply “Needles!” to torture Chidi is of course, stupid, but that’s because it’s supposed to be. Vicky is great at playing uber-basic evilness, and it’s a needed contrast to Michael’s brand of sophisticated, nuanced, and now apparently malleable evilness.

While the show may now be running into too-sweet territory as we watch Michael change before our eyes, it’s also opening up alternate plotlines for our most intriguing characters to pursue. Will Janet truly “go get it girl” (per Eleanor’s advice) with Derek, her new, Jason-like rebound guy she’s created, or will she succumb to even more “heart”break upon missing the void left by Jason (again, a very human emotional trajectory)? How will Michael either succeed or be defeated with his newfound sense of loyalty and accountability? Hopefully, some delightfully unexpected fates await our outstanding cast of demons, demigods, and plain old human beings.