We’ve been waiting for this moment for a long time: a change in scenery, ultra-high stakes, and well, Molotov cocktails (courtesy of Jason). After over 800 reboots, our gang has finally made it to the Bad Place–of course, a good thing, considering it’s their only possible ticket to The Good Place. Lightning-quick humor is perhaps at its finest here, with everyone naturally having to think and act a little faster than normal, but it’s the underlying, teeth-gritting suspense that makes the episode as firey (yes, pun intended!) as the hell where it takes place.

One thing “The Good Place” writers have always excelled at is perfectly identifying little pieces of hell–or things that can get you there. From early on, when Michael was introducing the humans to his experiment, he showed them a slide with various deeds affixed to the point system–like, “Tell a woman to smile, -53.83” and “Maintain composure in line at water park in Houston, +61.14.” Their skill at adeptly selecting super-specificities in creating their world is again on display in our latest chapter; at one point, when Shawn notices Michael’s ditched a meeting on how to apprehend and torture the humans, he sends out his minions to search for him through “Holiday weekend at IKEA” and “children’s dance recital” departments.

With each beloved character actively flirting with total disaster, the heat is turned up immensely as soon as the group is outed by robotic versions of themselves, unveiled by an MC presenting the commemorative “immortalizing.” Given that Jason’s idea of a Molotov cocktail was mentioned multiple times–well, he mentioned it, forcibly in conversation, and was ridiculed, of course–we knew it had to bear significance. His tossing of the cocktail was the perfect trigger for one of the more shocking, and heartrending, moments in the series’ history. 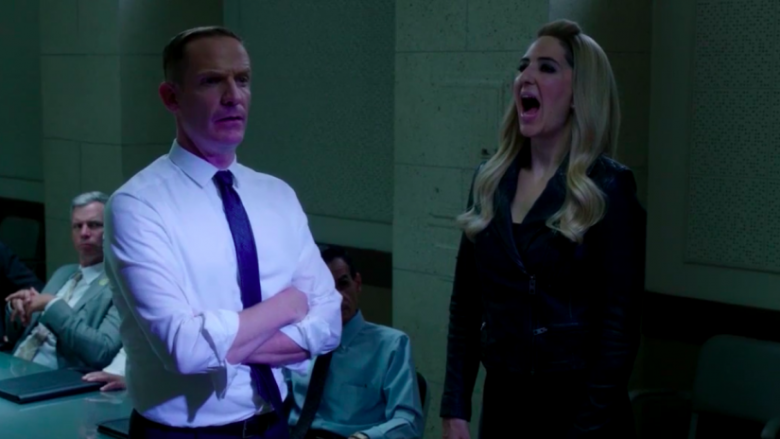 Michael’s sacrifice of himself to the demons-in-charge, just as he sends off all 4 of the humans through a portal (and into the unknown to reach the “Eternal Judge”), is the first time we’ve seen a selfless, and perhaps the most morally good, act from any character. That it comes from an ancient demon is incredibly poetic, and sets up an array of possibilities for what will come next. It’s possible that by martyring himself, he himself could earn his way into the Good Place, although eternal torture seems more logical. His very long jig is finally up, that’s for sure, and the way he played this moment–tenderly, with total heart–is yet another reason for an Emmy nom.

“No, I want to strangle you.” –Eleanor to Chidi as he struggles with the concept of lying to demons on the train ride over to the Bad Place.

“I’m aight,” says Tahani as “Rhonda,” in response to another demon going to the bathroom and offering up her poop upon return.

Dax Shepard’s appearance as demon-brah Chet and his gang of equally obnoxious buddies. His “Smash ya later” comment to Eleanor, considering the two are one of Hollywood’s favorite married couples.