It’s a special kind of series that can almost completely reinvent itself with each episode, and still remain plausible and several jumps away from the shark. Of course, it’s easier to reinvent the wheel in a story when the characters themselves have their memories wiped constantly (and in last week’s episode, over 800 times). Yet, even after the brilliant finale twist of last season, there are probably few viewers who could have predicted exactly where we’d be now. Thus is the genius of “The Good Place,” which in Season 1 seemed like it might become overly gimmicky, but is now one of the most intellectual shows on cable television.

After way, way too many attempts to make his faux-paradise a convincing heaven to his victims, and getting caught every time by said victims, Michael finally gives up and realizes he needs a new plan. The clam chowder lazy rivers and a “soulmate” singing (only) the first few seconds of a 3-hour spoken word jazz opera were dead giveaways to Eleanor that this was no good place at all. It turns out, she’s almost always been the one to figure it out (with the exception of Jason, somehow, once). The fact that Eleanor, Chidi, Tahani and Jason almost inevitably follow the same instincts, habits, patterns, and actions is a pretty obvious reference to the Nietzschean concept of eternal return. It’s proving to be as heady of a show as it is funny and intriguing, launching its characters into metaphysical conundrums, staying deliciously vague with those boundaries and possibilities within this strange afterlife.

Of course, when Michael presents his plan to attempt to take down the conniving Vicki (or rather, selfishly protect himself from torture), he presents it like Satan himself might–trying to convince the humans among him that “working together” is going to benefit and save them. If they pretend like they haven’t caught on to the fact that they’re in the Bad Place, he says, he could potentially get them to the actual Good Place, and he waves this notion like a carrot in front of their noses. Eleanor, as skeptical and cynical as ever, is characteristically trying to “nope” her way out of the situation–at one point, she tries to sneak out the back door en route to the medium place, and gets Janet to summon her an escape train “packed to the brim with cocaine” for Mindy–but in the end, she too decides to make a deal with the literal devil. 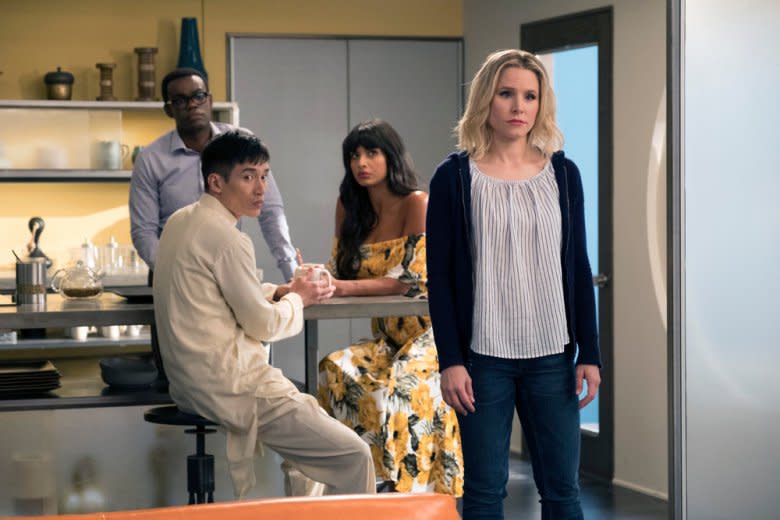 “Team Cockroach” now has an actual plan: that is, the humans will play dumb, Michael will attempt to thwart Vicki’s plan to usurp his throne, and in return, he’s agreed to take ethics classes from Chidi. Who knows–will they be able to transform a demon? Or will something else totally out of left field alter the team’s course again? We’ll wait with bated breath to see what transpires in the cutest, colorful hell on TV.