One thing that makes “The Good Place” a perpetually unstable (yet joyful) ride is how we can never trust what we see as reliably true (at least, in the second season, after a jaw-dropping reveal). I decline to say “real” because obviously, nothing is real: not the body Michael inhabits, the fake blood that splashes into Chidi’s teeth, nor the massive flying shrimp that once taunted Eleanor 800-something “trials” ago. But since the rules and quasi-realities of Michael’s project seem mostly exposed at this point, it’s still tantalizingly unsettling to know that we may see yet another big twist and get our minds blown. There are still many questions that linger at the periphery of my mind when watching, and I’m realizing their bothersomeness may also be intentional clues that Schur is leaving for us attentive viewers. For example, I’m still not sure how Michael, an eternal and omniscient being, is different from other presumably eternal and omniscient beings–like his boss–who somehow don’t catch him working with a team of humans and “retire” him immediately. Is Shaun the ultimate torture architect, watching and waiting in his weird green cocoon?

The episode is particularly brilliant, pushing our good-bad (bad-good?) characters like Chidi to expose more of the personalities them got them into The Bad Place. In one choice scene, Michael again shows off the ultimate devilish grin (each one is so good, it could win him an Emmy) before snapping his fingers and transporting Eleanor and Chidi to a very, very realistic simulation of the classic Trolley Problem. It’s fascinating to see Michael’s ability to force his characters to face situations concretely as opposed to theoretically–and makes a pretty solid argument for why he’s not entirely bad. Unfortunately, Eleanor and Chidi don’t take this simulation as an opportunity to look internally and question themselves. Chidi, in fact, lashes out at him the most aggressively, banning him from class after Eleanor outs his act as just another form of torture. While his ultimate confession of vulnerability and sorrow to Chidi for derailing his ethics classes may or may not have been genuine (question EVERYTHING is Eleanor’s lifelong motto, and now ours as viewers), this episode again highlighted Danson’s superb acting chops. Like a demon, his constant shifting and manipulation is entertaining and impressive, as well as confounding. 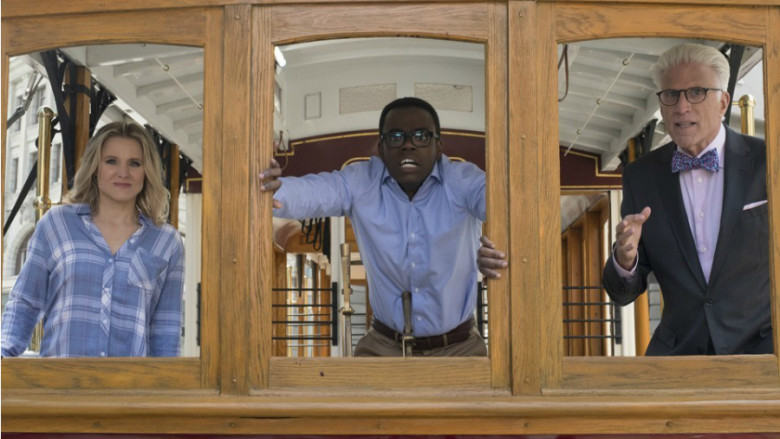 Meanwhile, Janet as therapist for Jason and Tahani is a treat to watch: the two are able to genuinely bond, thanks to Janet’s guidance (“Give me a second to read all books written on psychotherapy ever. Okay, done!”), but when each of her sessions ends with a “glitch” in her presentation (e.g. her thumb begins to float away; she upheaves a frog) it’s just another set of telltale signs that something ain’t right, and something’s gotta give. At the very conclusion of the episode, coupled with nerve-crunching music, we learn that Janet very simply can’t stay, as the universe is on the verge of “collapsing.” Again, it could be that the all-seeing Shaun is playing the ultimate long game of torture for the entire population of this world, and is just now dropping the hammer on Michael to banish him from his job as an architect of hell. It could also be that Janet herself is the only “God” and the only trustable being in the entire cast of characters. The earth quaking in the last minute of the episode is the perfect cliffhanger to remind us that we just can’t get too comfortable with anything as it is–because, well, we still don’t really know what it is. Will Eleanor and Chidi’s ethics classes for Michael really ever work? Is Michael’s apparent newfound capacity for empathy and apology (also something to be skeptical of) what’s upsetting the formula and causing the ground to tremble? We’ll find out next week what’s this universe’s fate, and what that means for our players.