At the conclusion of last week’s season premiere episode of The Good Place, one thing seemed clear: there was a battle ahead. One team, helplessly and desperately vying for control over their fate, was up against an army of demons that just want to be able to torture ‘em like they used to. Michael was in a tough spot, unable to successfully corral any support from his minions, who are all rightly skeptical of his begging for another chance. Eleanor and friends are in an even tougher spot, only able to recall and retain a limited amount of information before Michael resets all their memories.

This episode takes us on a lightning-quick ride through over 800 attempts that Michael, now a hapless, grizzled mess, has made to successfully keep the “Bad Place” under wraps before Eleanor figures it out (it’s Eleanor who does, every single time, except for one time when bafflingly, it’s Jason who does– “Really? Jason figured it out?” says Michael incredulously before snapping his fingers once again). Sometimes, it’s uncovered extremely quickly; sometimes it takes 128 days. In a nod to Groundhog Day and Bill Murray’s exhausted series of attempts to take his own life, we’re taken through a hilarious montage showcasing the moments of Eleanor’s discoveries: when she’s carrying a handful of balloons through a small field of cacti; when she and a group of others are dressed in black Grim Reaper costumes and walking aimlessly, etc. The incorporations of hell into the facade of heaven are just way too clunky and obvious for anyone in our beloved crew to be fooled for very long–there’s no way that a giant fountain of clam chowder would be in anyone’s heaven. As a result, the minions begin to give up and eventually strike, with only “real Eleanor” as their representative, and her ultimatum for Michael is either give up his scheme and let her run things, or she outs him to Shaun, who thinks he’s still on attempt #2.

One of the show’s funniest, and most intriguing, moments comes when the crew makes their 15th visit to see Mindy St. Clair, who’s sick to death of them, in the Medium Place. She’s able to guess their every move, line, and motive, even speaking in harmony with Chidi’s frustrated “Stop doing that” as she’s imitating his quirks. What’s most interesting, though, is how she’s videotaped Chidi and Eleanor multiple times in bed together. It places an element of sweetness and intrigue into our story: how will their constantly-budding relationship, which is obviously inevitable, affect their struggle to get out of hell? Is love going to play any part in saving anyone? Do they actually love each other, or is this crush just another element of torture in this shoddily-built universe? 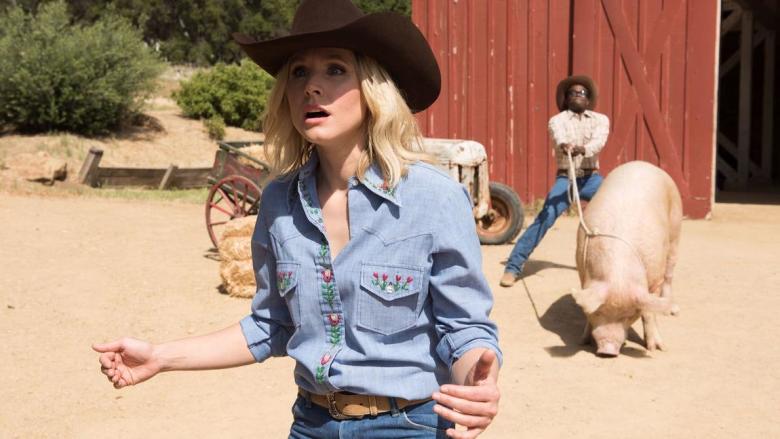 Another question worth asking–how has Michael been able to hide from Shaun that he’s failed his experiment over 800 times? It seems now that Michael’s a part of the tortured, too, if Shaun, in fact, is all-knowing and can see everything unfolding in painful, disastrous detail. Michael makes a final decision in the last minutes of the episode: to team up with his “foes”, instead of trying to beat them. When the Fab Four confront him in the latest iteration of their “gotcha” moment, Michael concedes and seems ready and open to “working with them.” The questions, now, are how that’s going to work, and what’s at stake. Are they all trying to avoid eternal damnation now? Clearly, Michael’s in a different tier, with a “responsibility” to make his victims suffer, while the others are basically helpless pawns, but ultimately, they’re all in the Bad Place. How they’re going to escape their current lot is what we can’t wait to find out next.