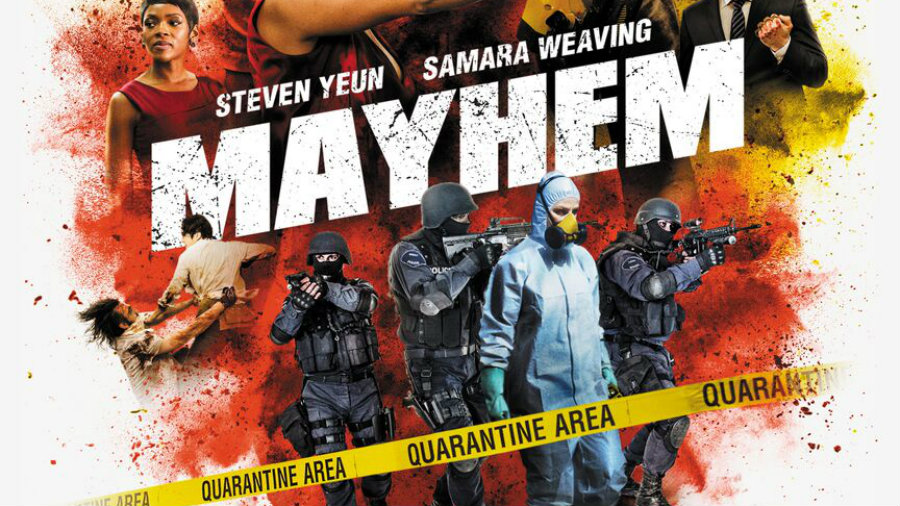 This weekend, RLJE Films is opening S. Craig Zahler’s Brawl in Cell Block 99, starring Vince Vaughn, and being the studio’s most high profile release, they might as well capitalize on that by attaching a trailer for one of their upcoming genre flicks, Joe Lynch’s Mayhem.

It stars Steven Yeun (The Walking Dead) as Derek Cho, a guy who has just been fired from his job at the law firm. As he’s about to leave, he learns the building has been quarantined due to a virus that makes its victims act out their wildest impulses. Along with a former client of the firm (Samara Weaving of Ash vs. Evil Dead), the two of them decide to get their violent revenge against those who wronged them.

It’s Joe Lynch’s fourth feature film after 2007’s Wrong Turn 2: Dead End, Knights of Badassdom and 2014’s Everly, starring Salma Hayek. This one looks a little like Greg McLean’s The Belko Experiment, written and produced by James Gunn, which was released earlier this year, but it’s probably just a coincidence since both movies were basically being made around the same time. (Clearly, a lot of genre filmmakers have had hellish office jobs in the past that have gotten them thinking about this sort of thing a lot.)

Written by Matias Caruso, Mayhem had its premiere at the SXSW Film Festival in March, and it will play Beyond Fest in L.A. this weekend, then Toronto After Dark and the Brooklyn Horror Film Festival later this month before its release in theaters, VOD and Digital HD on Nov. 10.