The open and close of the third-season premiere of THE LAST MAN ON EARTH are filled with suspense and surprise. It’s what we should get – the shaky camera and rapid-fire cutting is the right pace for the show.

But much of the first half-hour of the season drags into character exploration, killing the momentum and ultimately starting The Last Man on Earth in a stale, middling place.

Let’s start with our villain, Pat Brown (Mark Boone Junior), the bearded wacko in the spacesuit who won’t trust anyone. We start where we left off at the end of last season, with Pat and his crew – Lewis and Darrell – watching the survivors. Immediately they begin an invasion, leading to a shootout, which leads to a decision on who exactly gets to stay. Since Phil still has stroke, he talks the survivors into letting both Pat and Lewis (Kenneth Choi) stay. It turns out to be a bad idea, as Pat turns on the group upon realizing Tandy and Mike’s familial relation. In the end, our heroes run over Pat with the A-Team van (or at least that’s what it looks like).

All of this unravels either in the opening five or final five minutes of the season premiere. Thus much of the episode – titled “General Breast Theme With Cobras” – focuses on the survivors figuring out just why Pat makes everyone nervous. He killed someone. He can’t be trusted. He’s off-kilter (with some hobby of designing jeans). This is blindingly obvious early in “General Breast Theme With Cobras,” but we run through the motions with the character. By the act break you’re pretty ahead of the characters.

More interesting is Melissa’s confidence, which is at an all-time high after sniping Darrell, one of Pat’s spacesuit-wearing cohorts. It helps that Darrell happens to be played by Jon Hamm, a very giddy wink to “Mad Men” fans angry that Betty Draper didn’t survive the series (and, in essence, ex-husband Don). In this world, though, we have to ask about Melissa’s capabilities. She briskly brushes aside any concern after killing Darrell. For sure, she’s the most dangerous member of the survivors.

Otherwise “General Breast Theme With Cobras” is a decent, if uninspiring season premiere, funniest when lampooning Starship’s “Nothing’s Gonna Stop Us Now” at Darrell’s funeral. (Was anyone else reminded of Donny’s service in The Big Lebowski there?). Lines are still sharp (“I can make ‘em sing like a Doobie Brother”), and we’re starting to realize that the survivors have killed quite a few people. The bizarre darkness of this show is becoming more apparent. 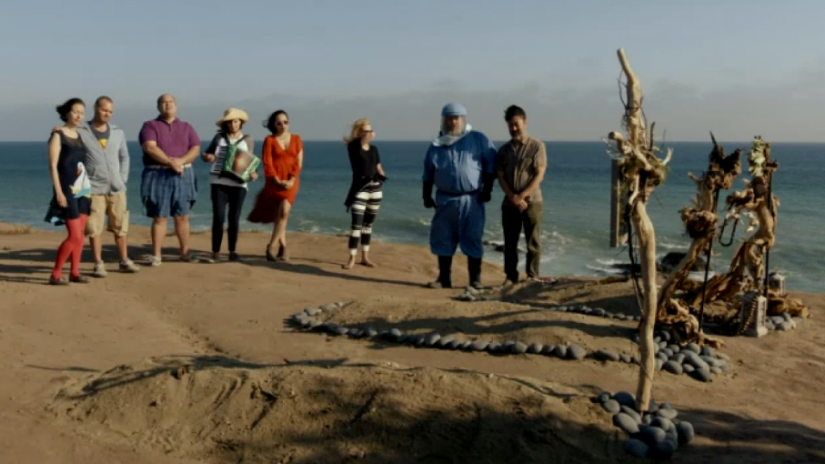 It’s also good that we’re reminded Phil needs to feel in charge and wants to be accepted, however selfishly, and that his decisions typically lead to very real trouble. But the audience isn’t dumb – we don’t need to spend a full half-hour unpacking a paranoid nut like Pat.

Spending so much time trying to figure out an obvious character – and especially not giving the ensemble much to do – really weighs down a show capable of packing in the laughs. But now that Pat’s gone (though we can’t be so sure, can we?), maybe the show can start doing what it does best.