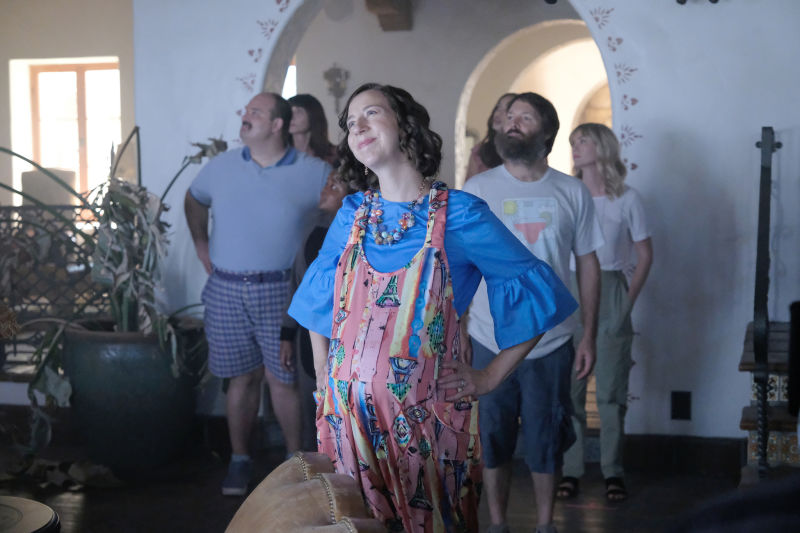 Incorporating a parallel storyline in flashbacks about a violent drug cartel into Last Man on Earth may seem like a big step off the sitcom’s standard path, and indeed, the last time there was even a flashback in this show was in the third season, when Pamela grapples with her bunker life. It’s inarguable that the show needed some kind of shift before it began to drag again, and thankfully, that shift began to happen last episode with a sobering final scene of Todd barely alive on a hospital bed. So it was certainly a relief to receive some much-needed sabor as we learn that the new crash spot for our gang has a dark history, occurring in the year 2017.

Of course, some chuckles were also necessary to keep the show from seeming too much like the Heisenberg saga. We got those by a) seeing Todd reluctantly place a poorly-sized helmet on his head, per Melissa’s demands to keep him safe; b) watching Tandy leap into a pile of packing peanuts (which seems like a ridiculous amount of fun, actually) to prevent his soon-to-come child from getting “HERPESS” (High Elevation Rugrat Positively Evades Staircase Syndrome), and c) observing that Dawn, the newborn, is, in fact, an “adrenaline junkie.” However, the intrigue of these side stories paled in comparison to the extremely well-done Zihuatanejo tale, which shows how “La Abuela” ruled over her house with both a cold sureness and a shameless cruelty.

In “La Abuela,” a couple Chekhov’s guns pop up on the proverbial wall: a pinata and a Rubik’s cube, either of which may or may not contain explosives, placed secretly by La Abuela herself. It’d be pretty absurd and drastically deviating from the network sitcom etiquette if the young, cherubic Jasper, who circles and toys with the pinata (and our nerves), ends up a pile of guts, so it seems natural and fitting that when he finally hits it, actual candy comes out. In a perfect cliffhanger in the final seconds, though, the camera freezes on Tandy fiddling with the Rubik’s cube, which conceivably is the one that will go “bang.”

Excellent performances by our guest stars, as well as tender ones (namely by the quietly arguing Carol and Tandy over the safety of their baby in an uncertain world), made this episode one of the strongest in awhile. Obnoxiously dumb shenanigans by Tandy were limited to him knocking over a couple things and jumping into that super-fun looking heap of styrofoam, but they were largely forgivable, considering that touching dialogue with him and Carol that followed. Here’s hoping that gore isn’t another genre introduced into Last Man on Earth’s next episode.