It’s no secret to anyone watching The Last Man on Earth this season that there hasn’t been much genuine thrill so far–at least, in the stakes being heightened significantly. Many episodes have seemed more like filler, and unfunny at that. At last, another shot in the arm: Fred Armisen, the latest and perhaps equally short-lived guest star in the series. It would certainly feel disappointingly played-out if Fred were to leave so soon, just like so many others (e.g. Jack Black, Kristen Wiig) and there’s a semi-clever tease at the idea of him departing very quickly. Moving forward, we can anticipate hopefully some sustained intrigue, and enjoy Fred Armisen’s tightly keyed-in style of humor. 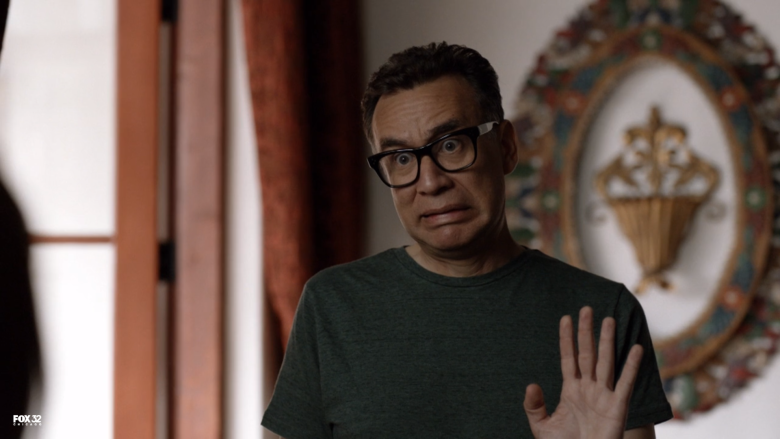 There’s nothing quite as creepy as a serial killer who can play nonchalant and normal exceptionally well, but with an artful touch of “Uncanny-Valley”-esque behavior (just slightly off enough to give us an odd feeling), Armisen captures the essence of creep here. Indeed, some moments fall flat: like the notes on the untuned piano he mashes in front of Tandy after lying about his piano skills, that very scene goes on a bit too long (although watching him really vocally get into the performance of “Bennie and the Jets” is pretty great). But since Tandy’s paranoia and his general lack of judgment ability have rendered him untrustworthy for most of our gang–particularly Gail–it makes poetic sense that he’d be the first one to notice something “off” about Karl.

One of Forte’s sharper scenes in memory comes in his scene trying to play off the consumption of Band-Aids as normal to convince Todd of his theory that Karl’s not who he says he is. (Which, by the way is about ten different things: “The Code Forgetter,” “The Everyone Forgiver,” and at last, the “Nickname Accumulator.”) Forte’s ability to strike the perfect singsongy tone and terse delivery with rich lines like “The hot sauce might dilute the taste of the congealing blood,” and “My instincts are all outta whack, so I just shrugged my shoulders and did nothin’ like y’all asked.”

In our current other storyline about poor Jasper, scared off by the helicoptering adults, it’s revealed that Melissa is perhaps the least and most motherly of all–helping Jasper stay out of sight from the adults, she’s (apparently) regularly dropping off ice coolers so he can survive under a road nearby. It’s been Jasper’s instinct to create little hideouts for himself, so this move makes sense. However, the rest of the adults think Melissa is somehow heartless for asking the group that they should stop looking for Jasper. Her tough-presenting softness is a refreshing new development in her character.

After Todd and Tandy chase Karl to the graveyard–he’s taken off in a midnight ride to the cemetery, breaking down after realizing how he genuinely doesn’t want to eat his rescuers–we’re left on one significant cliffhanger. Karl doesn’t stand a chance for lasting in the group, but we’re up for some hopefully extended excitement for a continued shot of adrenaline in our next episode.

“Erica, my instincts tell me you’re wrong as a dong, all day long, and it’s daylight savings.” (Tandy, explaining desperately to the gang that something ain’t right about Karl.

“Well, that sucks.” (Gail’s perfect response to Karl’s hilariously bad painting of her)

Todd’s shaking uncontrollably in horror (reminiscent of this great moment in cinema), watching Karl consume rotting flesh in the cemetery.