Martin’s curse on the thrones of Fillory kicks in and soon Alice, Eliot, Margo, and Quentin are at each other’s throats on THE MAGICIANS. Penny is the only person who can stop them from killing each other, but his hands start acting up. Julia and Martin confront Raynard, but Penny interrupts and soon Martin is fighting for his life in Fillory.

I like Penny a lot. He’s one of my favorite characters in the series, but definitely wasn’t when I read the books. In the books he’s an aloof dick that disappears for a big chunk of the trilogy, so the writer’s on the show have done a great job turning him into a much more interesting character. He’s not really part of the Alice, Eliot, Margo, and Quentin tight friendship, but is still close enough to them to come along on their adventures. When they get to Fillory there doesn’t seem to be any thought by the others to make him a King, nor any interest in it from Penny’s perspective. There are big things in store for Penny in the future, but for now he’s along to be the voice of reason when the others go off track. 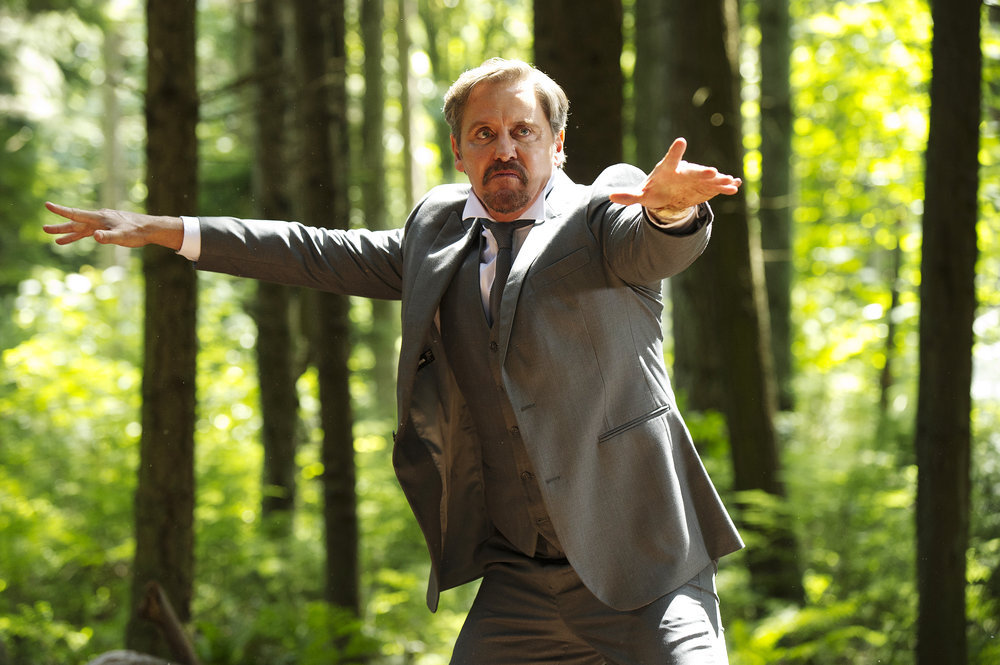 Martin seems a lot less scary since he’s teamed up with Julia. There’s a joker quality to him, like he doesn’t take anything serious at all. It’s a weird transformation, and a little disjointed going from the eye gouging, moth covered face psychopath we first encounter at the beginning of the first series. I’m not sure it really works. I’ll stick around to see what they do with him, but the choice of making him and Julia sidekicks is entirely outside the realm of the books as far as I can remember. If he actually helps Julia kill Raynard and his contract is no longer valid, will he go berserk, or will he continue to be nice to Julia?

When the gang gets back to Fillory, Quentin completely forgets to tell everyone Julia told him Martin left a curse for any humans ascending to the thrones of Fillory. It’s too late before he remembers, and the curse already takes hold of them. The minute anyone sits on a throne in Fillory, the curse begins to make them paranoid to the point where they actively try to kill the other Kings and Queens. Penny watches this unfold, and seems completely unable to do anything to stop the others in their devious plans against one another. The only person Penny can trust to help him stop the curse is Eliot’s wife Fen. In the course of their fighting each other, everyone but Quentin lets loose the demon Fogg placed in their backs. How is Penny going to stop the curse if it won’t run its course until all four of them are dead? 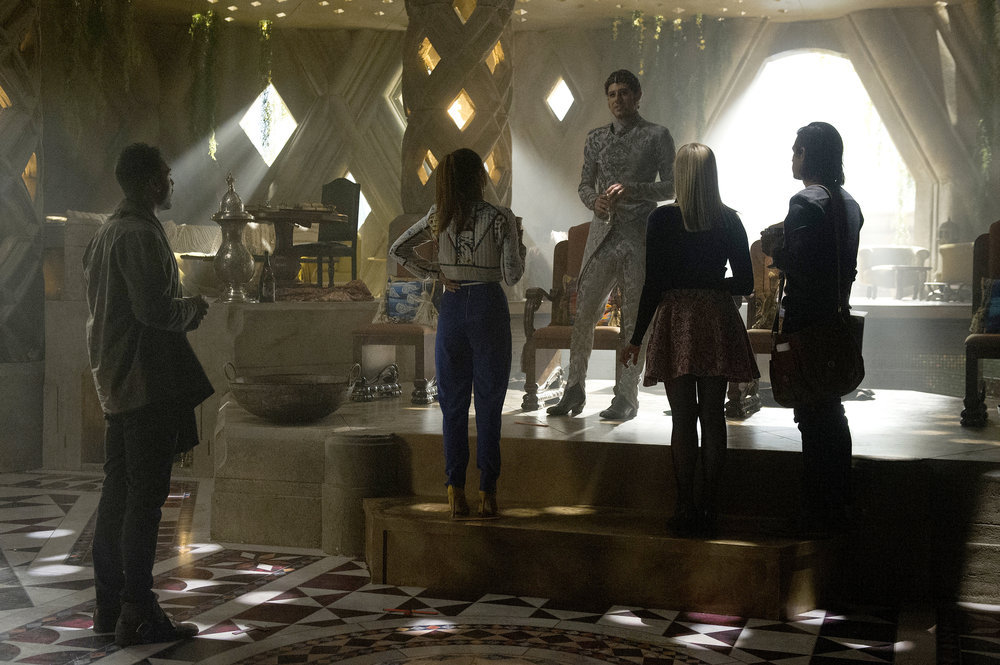 Marina is now actively helping Julia and Martin after wintnessing what Raynard has been doing to all of the other hedge witches. She’s the bait to get Raynard to show up. Once he does, Martin will freeze the god in his tracks long enough for Julia to use the knife and kill him. Killing a god cannot be an easy thing though. Raynard knows Julia’s scent, which is why Martin whisks her away while Marina finishes the ceremony. He hopes Raynard will follow Marina home. They can catch him there if they are fast enough, and if Raynard hasn’t already killed Marina.

So if Alice, Eliot, Margo, and Quentin all have to die for the curse to run its course, how is Penny going to save them? The solution he comes up with is ingenious. He has four syringes full of a drug which will stop their hearts, and four more filled with adrenaline to get their hearts started again once they’ve died. It works perfectly, only Penny’s hands have stopped working again, so all four of the others end up running around stabbing each other with syringes until they are all dead. When he revives them, the curse is broken. Now they can get on with what they really came back to do, kill Martin Chatwin.

Martin and Julia arrive at Marina’s just in time to freeze and kill Raynard, but Penny shows up and takes Martin and Julia back to Fillory. Marina is stuck alone with Raynard, and he kills her. Alice is ready with her spell once Martin, Penny, and Julia arrive in Fillory, but she only wings Martin before he disappears. Julia is pissed, but Penny brings her back to earth. In anger she tears off the chains that keep Penny’s hands from going crazy, and storms off to find Marina. I’m not sure how she’ll get to Raynard now without the help of Martin, and it seems Raynard has also escaped with the magical knife. 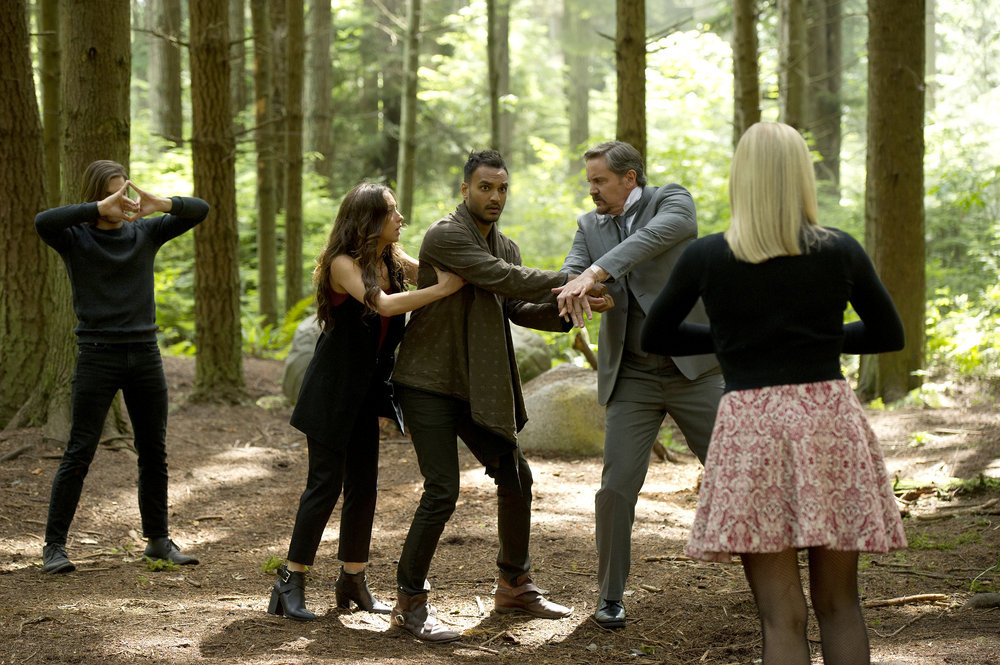 The only place Martin can go in Fillory to heal himself is the magical well, but he’s in for a surprise once he gets there. Ember has taken a poop in the well, fouling it so the water is undrinkable. Alice and Quentin arrive to confront a wounded Martin, who casts a spell to kill Alice, but Quentin dives in front of it and saves her. Alice is too powerful for Martin in his present state, and in a fit of rage, she tears off a Talisman protecting her from her own powerful magic. The magic is too strong, and Alice is consumed by it. She turns into a Niffin and disappears. Martin thinks he’s won, but Alice appears again and kills Martin. She’s about to kill Eliot and Margo when Quentin lets the demon out of his back to stop her. The episode ends as Quentin mourns over her dead body.

How is Julia going to kill Raynard on her own now that he has the magical knife? The others have saved Fillory from Martin Chatwin, but at what cost? Is Alice really dead? She became a Niffin just like her brother, but can they find a way to save her or heal her? Will Penny ever get his hands permanently fixed, and if he does will he ever reconnect with Jade?