There is one thing both Julia and the kingdom of Fillory need to deal with their problems on THE MAGICIANS, and that’s gold. The only way they can get enough of it is to rob a bank, and magicians guard the vaults of banks. Will they be able to pull of the heist and save themselves? 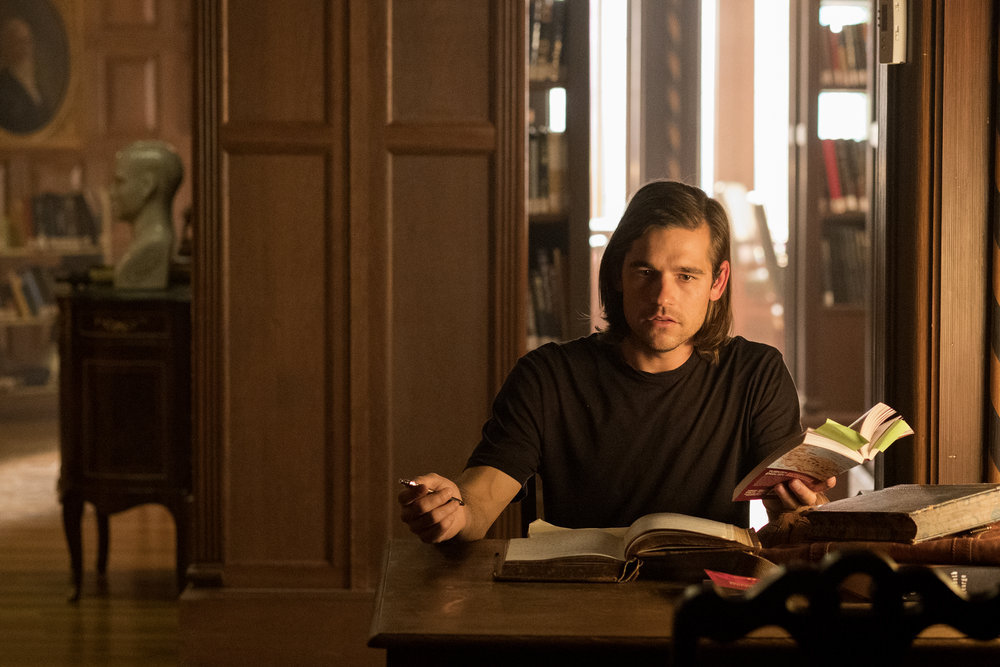 Since Alice’s death her Niffin has haunted Quentin. It looks like Alice, it talks like Alice, but it isn’t Alice. This shell of what was once Alice is now trapped in the containment tattoo on Quentin’s back. It’s angry, it taunts him, and only he can see it. Alice wants Quentin to set her free, but she’s become an evil spirit and if he sets her free there’s no telling what kind of mischief and mayhem she’ll get up to. Instead, he wants to find a way to save Alice and bring her back to life, but there’s no guarantee whatever he does will work. He’s stuck being tormented by her for now.

Julia and Kady visit someone who may be able to help finally abort the child Raynard put inside of Julia. They end up nowhere anyone would suspect: at a butcher shop run by two Asian sisters. After taking one look at Julia, one of the sisters thinks it’s too late, while the other tells them she can help, but needs one million dollars in gold. How in the world are they going to get that kind of money?

Margo’s preponderancy to fly off the handle and say whatever comes to mind has gotten Fillory in a lot of trouble. After she declared war on Loria, it comes to their attention the kingdom of Fillory is completely broke. Fixing the magical well Ember took a crap in has been way more expensive than they’d ever thought, and if the are going to afford to fix that let alone finance an expensive war, they’re going to have to get their hands on a lot of gold.

Julia and Kady decide the only way they’re going to be able to come up with the gold to pay the magical butcher sisters is to rob a bank. They’re magicians after all, so it should a breeze to pull off, only they discover magical wards around the bank vault are too complicated for just the two of them. While they case the bank, an invisible creature attacks Julia and Kady, the Haxen Paxen they keep in the trunk of the car saves them both, but not before it’s killed. What’s after them and who sent it? It seems the only place strong enough to protect Julia is Brakebills, so she and Kady head there to take refuge.

Penny has not seen Kady since she left without saying goodbye in Antarctica, and they run into each other in the library at Brakebills. The awkward moment is broken by their lust for each other, and they go at it right there in the library. It’s like nothing has changed, and all of the hurt feelings and animosity Penny felt for her goes right out of the window. She asks him to help her rob a bank, and he’s excited. He’s always wanted to rob a bank. 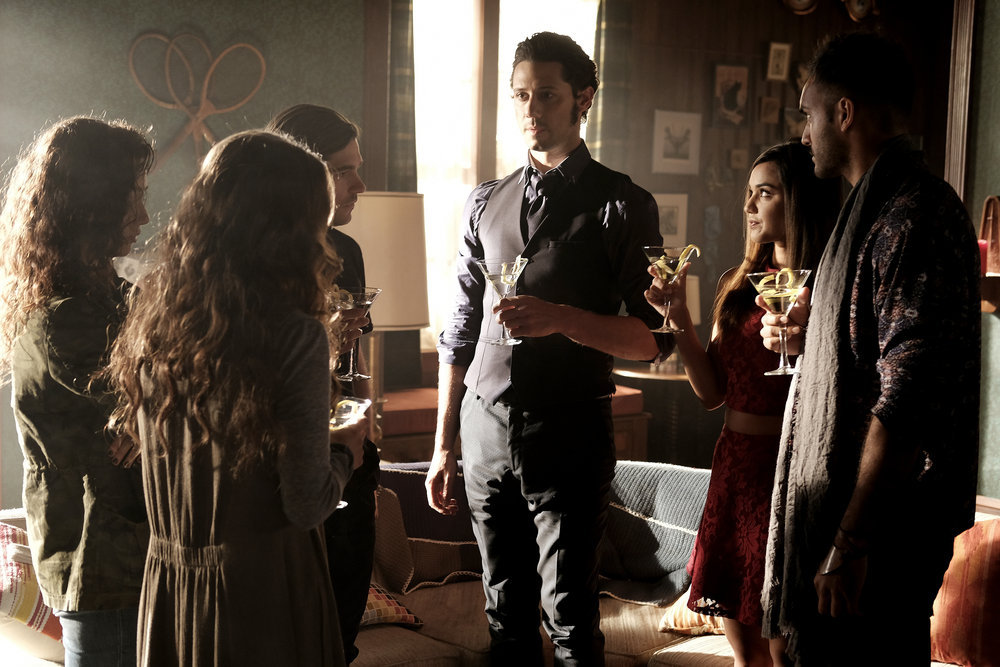 Julia convinces Quentin the only way he can help her, is to help rob a bank in order to get enough gold to pay the butchers. Once he agrees, he convinces Margo and Eliot’s Golem to pitch in as well, and soon the hair brained idea to rob a bank becomes an actual planned out heist. Margo ends up being the brains of the outfit, since she has experience when it comes to robbing banks, but like all great heist films, something goes wrong, and their plans go sideways. Julia can’t come with because the beasts after her have been sent by one of the butcher sisters to kill her and the child. The other sister will save her, but only once the gold is paid, so she’s stuck at Brakebills watching in a mirror as things go horribly wrong with the plan, leaving her friends trapped in the vault with a battle magician on the verge of killing them. How are they going to get safe?

Julia created a machine that can turn time back fifteen seconds. Once it appears like it’s certain doom for her friends, she shows up at the bank with the machine, and gives Penny, Kady, Eliot, and Quentin four chances to relive the confrontation with the battle magician until they get it right. The problem is Eliot sacrifices his Golem to save his friends and help them escape. What happens when your Golem dies with your consciousness inside of it? His real body in Fillory begins convulsing, and we’re left wondering what happened. 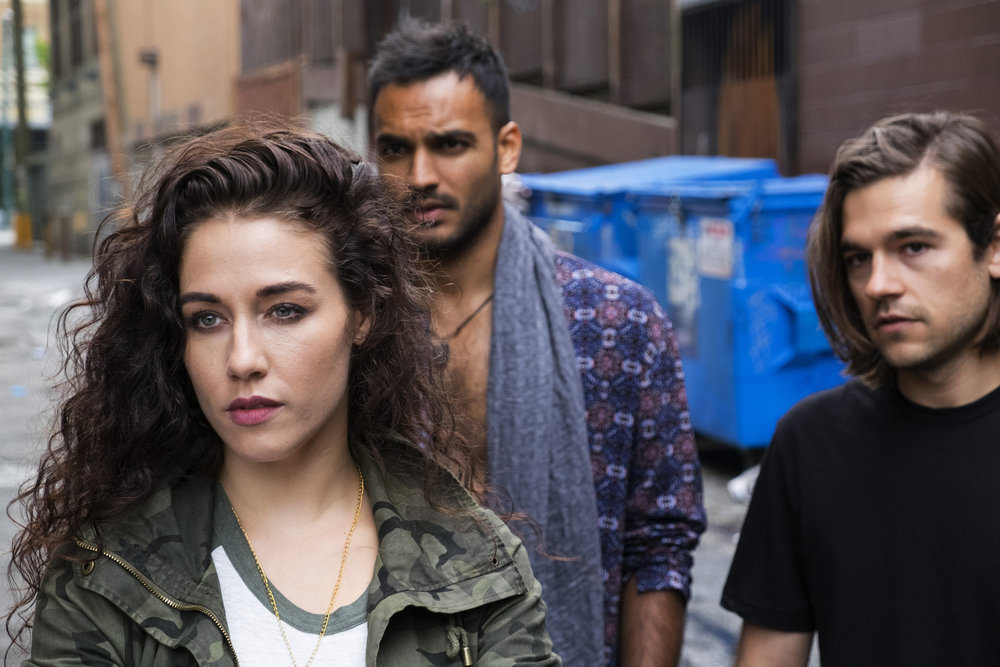 Julia has the gold now, so she can afford to have the butchers perform a magical abortion, but when she wakes up after the surgery Kady tells her there’s been complications. What happened? Did Raynard show up while the sisters performed the procedure, or is it going to be like the last time she tried to have an abortion? Did both of the sister’s die in the process? We won’t find out until the next episode of The Magicians. The thing that worries me is that the show has begun to feel like it’s spinning it’s wheels, unsure of itself, or what direction to take. If it doesn’t find itself soon, it could be to the detriment of getting renewed for a third season. The heist plot should have been a lot of fun, but it felt rushed and didn’t really work very well, so I hope the show grounds itself soon and gets back to what it does best.