THE MAGICIANS returns with a fun time line shifting, drug induced shade visiting, overdue book tracking down, fairies waiting to steal babies tale. This show has the ability to be incredibly enjoyable to watch, and this episode hits all the right notes.

I’m a huge fan of sci-fi shows with multiple timelines. Hell, I review 12 Monkeys and Outlander for The Tracking Board already, so it’s weird that I forgot The Magicians takes place during a time loop Jane Chatwin created to stop the Beast from killing everyone. We are witnessing the 39th attempt to get things right. The one thing that changed in this attempt that was different from all of the others, is that Julia was not allowed into Brakebills. We even get a glimpse of one of these earlier timelines where Julia and Fogg are going over magic together, and it’s clear that she’s incredibly gifted. The only person involved in these timelines that has any recollection of them is Fogg himself.

Seeing what Julia could have been in her prime makes her current circumstance of being locked in a “clean room”, basically a magic free prison, for the last three months all the more stark and depressing. Without her shade, Julia has become a selfish and thoughtless person motivated only but what she wants and unconcerned about the consequences. It’s clearly why she shoved Quentin into danger with Raynard, even when she knew there was a chance her best friend may be killed. She knows she should feel terrible for what she’s done to her friend, but she doesn’t, and the realization that she’s not quite human anymore means she’s a danger to others. Fogg releases her from the prison she’s been held in by Kady, and sets her back free into the world.

Julia is an interesting character. I’ve been a bit wary about how she’s been treated by the writing staff this season, but there’s some hope things may be turning around for her. Anytime a rape victim who’s had an abortion becomes the villain in a show you have to scratch your head and wonder what in the hell the creative team is trying to tell you. To me, it seems like a bad choice, but I don’t know the end game yet, so I could be off base with my criticisms depending on how the last three episodes turn out. Personally I hope there’s some sort of redemption for Julia from all of the negative things she’s gone through. If there isn’t, I’ll be disappointed. 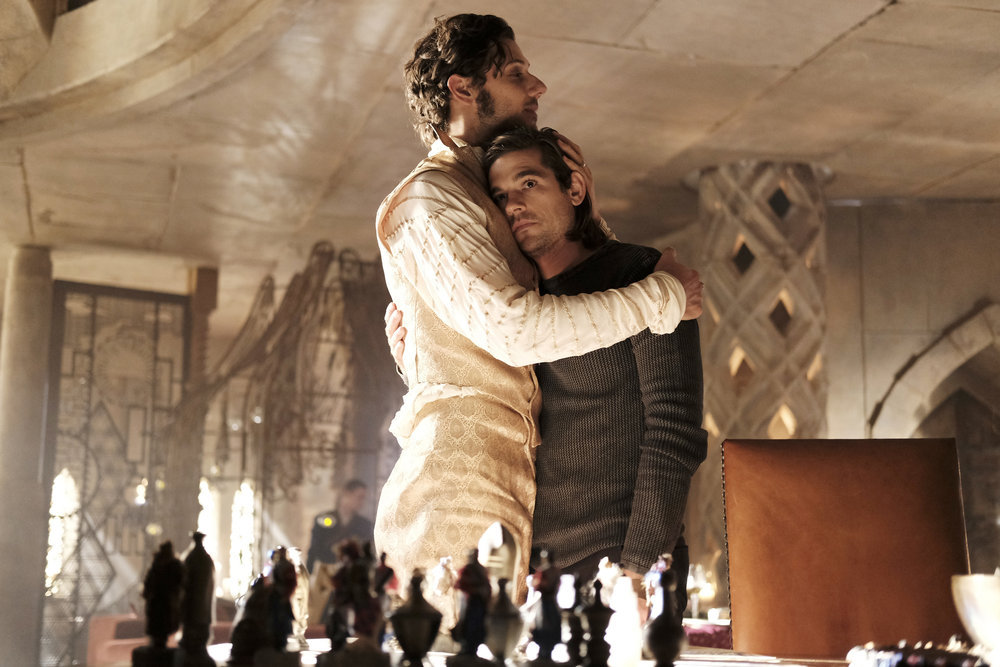 Since Quentin let Alice’s Niffin free from the tattoo prison in his back, he’s been a wreck. He’s been drinking and doing drugs to take the edge off of the pain of once again losing Alice. He’s basically been emo-Quentin for three months, and it’s getting on Margo and Eliot’s nerves. The preparations for Eliot’s marriage to the King of Loria are underway, and Margo needs help with the Groomzilla Eliot’s become. She sends Quentin on an errand back to earth to get Josh and bring him back to Fillory so he can cook for the wedding celebration. Josh has been concocting and selling magical drugs back at Brakebills, and it’s after taking one of Josh’s creations that Quentin finds himself on a magical trip where he runs into the 12 year old version of Julia, which is really her shade trying to find her way back to Julia. She begs Quentin to help reunite them, and now Quentin has a purpose again, and Julia may be able to be human if they succeed.

No one seems to know anything about shades and how they work though, and no matter how many books Quentin and Julia read to figure it out, they come up against a dead end. There’s one person they haven’t consulted yet, and that’s Fogg. He tells them that in the 23rd version of the timeline the only person who survives the Beast’s attack is Alice. She’s in a really dark place, and she becomes obsessed with shades. If anyone knows how to reunite Julia with her shade, it’s the Alice from the 23rd timeline. But how in the world will they be able to contact her? There’s a dangerous machine, only used once before that may help them communicate with Alice. It’s called a Tesla Flection and creates a bridge between the two timelines, but it’s dangerous. If anything goes wrong, it could kill everyone in the room. Quentin has only two minutes to find out what he needs to know before the bridge will disappear. 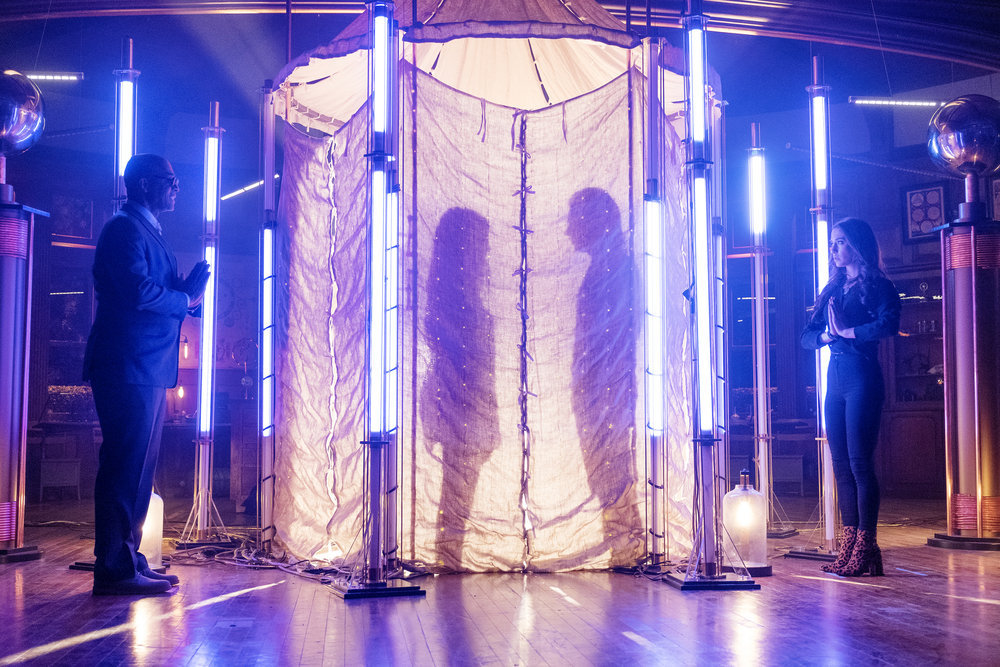 The Alice from the 23rd timeline is a real mess. She’s witnessed Quentin and everyone else die, and the Beast also destroyed Quentin’s shade so he couldn’t rest in peace. She’s spent her entire life, and three fingers, trying to find out everything she can about shades. What she knows is that shades go to the underworld, which is only accessible to the dead, and in order to gain access to it as a living being is to find a gatekeeper, or ancient one to let you in. Alice doesn’t know what that is yet, but once Julia and Quentin start searching for it themselves it turns out to be a dragon. Where in the world are they going to find a dragon? They have to find one if they ever hope to make Julia whole again.

I like the way The Magicians continues to find a way to bring Alice back into the story without it seeming clichéd. I’m curious how they will be able to keep it going since she’s dead. Her continual appearances may walk a razor thin line between being really great story writing and nonsensical convenience, but I’m hoping for great story telling, since she is one of my favorite characters. 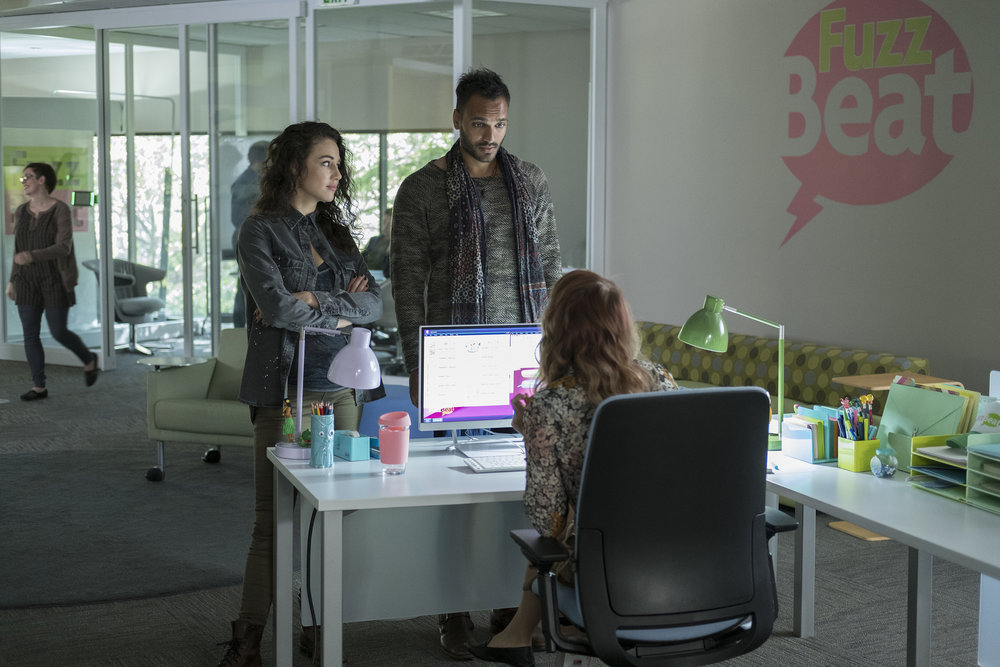 Penny’s contract with The Order comes through, and his first librarian job is as an overdue book hunter. While at the library Kady can’t find any books that specifically deal with killing a god, which annoys her. She and Penny track down the lady with the overdue book, Harriett (played by Marlee Matlin) who is a deaf magician who runs a click bait website. It turns out click bait is just hidden magical knowledge disguised online. Penny mistakes her sign language for spell casting and hits the deck, which is funny, but Harriet tells Kady there’s a book for killing gods in a secret “Poison Room” in the library. The Poison Room contains knowledge too dangerous for the general public, and Penny witnesses another librarian kill himself rather than open the door while under a curse. This job is going to be more dangerous than he thought.

In Fillory Eliot is worried that his approval ratings are so low, and that Baylor is secretly communicating with the Fu Fighters to assassinate him during his wedding. Margo and Fen are having difficulties because they can see the fairies waiting to take the royal baby. Fen thinks she’s going crazy, but once she knows Margo can see them too, she feels better, until she figures out why she’s seeing them. Margo comes clean about the deal she made, and Fen loses it. Will Margo be able to find a way out of the deal? The Magicians feels like it’s back on track again after wandering off course. I hope it stays this way.