Something strange is happening in Fillory. Fen is missing, a number of people have been turned into rats, and it may all be Margo’s fault. Quentin and Julia head down to the underworld to rescue Julia’s Shade, but find something else that catches their eye on THE MAGICIANS.

I’ve been wondering for a while how in the world The Magicians would bring Alice back from the dead after she’s been relegated to being a Niffin this season, and tonight’s episode may hold the key to her resurrection. Quentin and Julia find a way down to the underworld where all the Shades go, and it involves a baby tooth and a dragon. In order to get the dragon’s help and allow them access to the underworld without dying, Quentin has to give the dragon the magical button that whisks him back and forth between Fillory and Earth. It’s a huge gamble. On one hand he’s helping his best friend find the missing piece of herself that’ll allow her to be human again, but on the other, he’ll lose access to his friends in Fillory and the one place he always dreamt of going when he was a child. They have twenty-four hours to find and rescue Julia’s shade before the dragon eats them both. The underworld is huge. Will they be able to pull off the rescue in time? 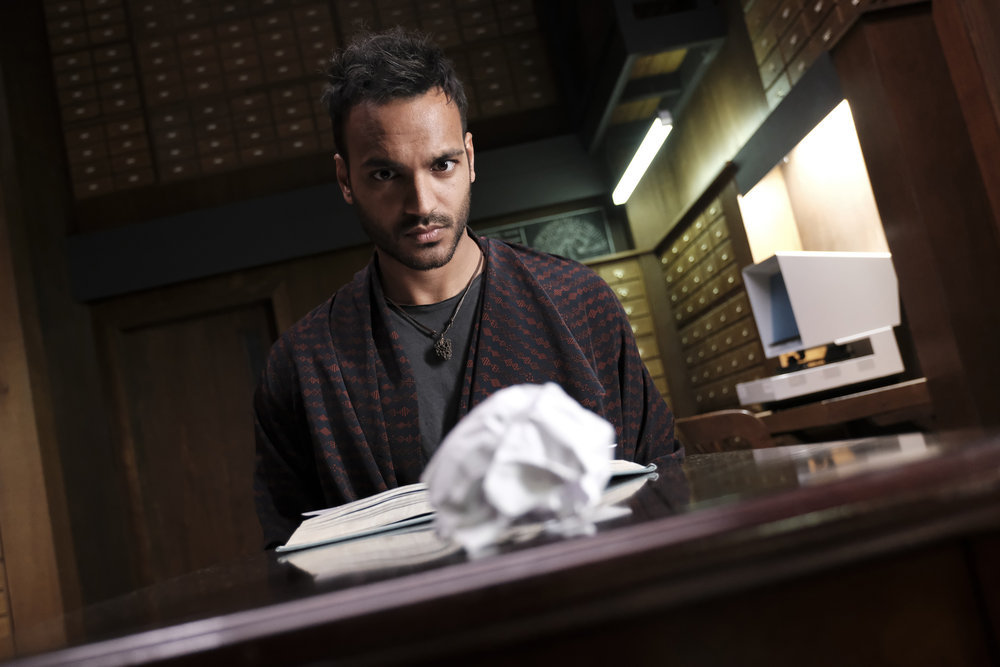 In a hilarious twist, Penny is learning sphincter magic because his hands still don’t work right. I’m not sure how butt puckering can conjure a spell, but he’s willing to do anything to get his magical abilities back. Besides tracking down overdue library books, Penny is also made to restock books after they’ve been returned, and his new supervisor is a teenage girl with an attitude. Kady and Penny can’t figure out how to get into the Poison Room and retrieve the book that’ll help them kill Raynard. They come up short in all of their attempts. Penny even goes to the awkward length of trying to seduce the head librarian. It’s an attempt to find out her real name so he can locate the book of her life hoping it may tell him something about how to access the restricted room, but she shuts his game down hard. There’s got to be a way into that room, but Penny just hasn’t figured it out yet.

Margo made a spectacular blunder in forging a deal with the fairies to save Eliot’s life (even if it didn’t end up needing saving) and trade it for Eliot ad Fen’s first born child, and now her error is having serious consequences. Fen seems to be mostly forgotten by Eliot as he prepares to marry the King of Loria, since for the first time in a long while he’ll get to have a sexual partner more in line with his interests. I feel a little bad for Fen, especially given Eliot’s excitement at his forthcoming nuptials to his new husband. It seems like she really cares about Eliot, and he only grudgingly cares for her, since he was basically forced to marry her. With his head somewhere else, Fen disappears and no one but Margo knows where. On top of this, right when Eliot’s about to get intimate with his soon to be husband, a huge swath of people in Fillory turn into rats, including the King of Loria. Are the fairies behind this too? 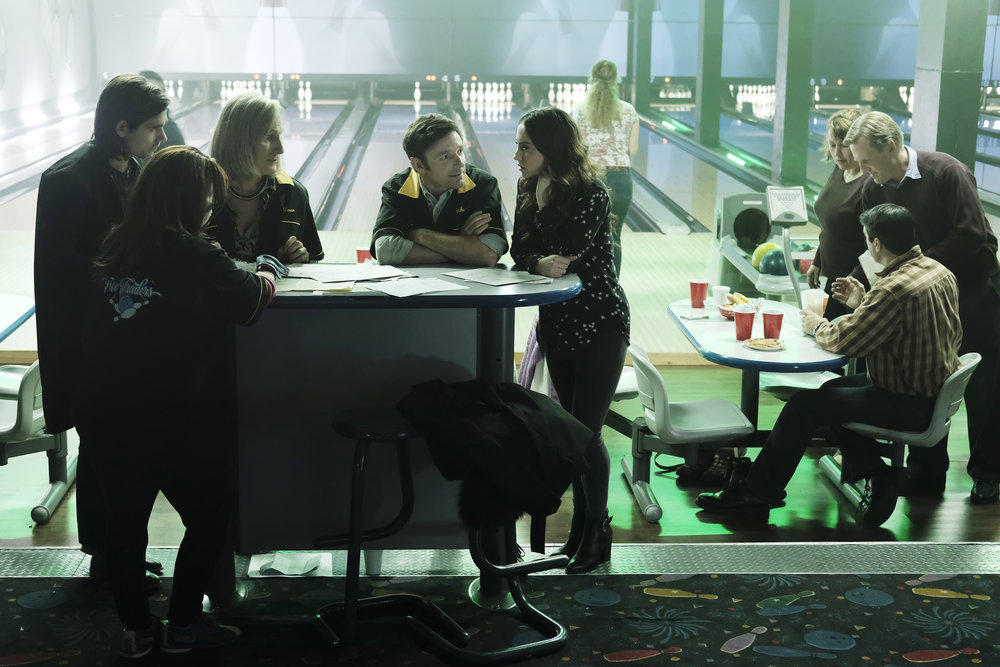 The underworld isn’t really how you’d imagine. It has a waiting room like a fancy hotel with a bellhop and customer service reps to help accommodate your stay. Julia is able to find the friends that she conjured Raynard with, and with their help and guidance, she and Quentin soon locate where all of the Shades are. It all comes back around when she realizes that “our lady underground”, who Julia attempted to summon when Raynard showed up, is actually Persephone, goddess of the underworld. The Shades all live in her house, performing minor miracles for the living, but Persephone has vanished and not been seen for a long time. Quentin finds Julia’s Shade, but Julia stumbles onto another Shade, Alice’s. They only have one attempt to rescue Julia’s shade and get back to the living, but she notices how moved Quentin is by Alice’s shade, so Julia changes the plan, and they escape back to the living with Alice’s shade instead. It’s a really compassionate thing Julia does to help Quentin, and it could be argued there’s still some humanity left in her. How are they going to use Alice’s shade to save Alice from being stuck as a Niffin?

Eliot uses truth serum spiked wine to figure out who in his entourage may be behind the “Rattening”, and Margo blurts out what she’s done. It’s an epic betrayal of trust, and though she thought she’d be able to find a way out of the deal with the fairies, it seems things have only gotten worse. In his anger, Eliot throws Margo in the dungeon, and then shortly after seems to be kicked out of Fillory. He just appears in their house at Brakebills and has no idea how or why he’s back. Margo wants to make things right again, so she takes it upon herself to drink a potion that’ll transport her to Fairie. Will she be able to fix her mess? If she does, is there anyway for Eliot to get back to Fillory? 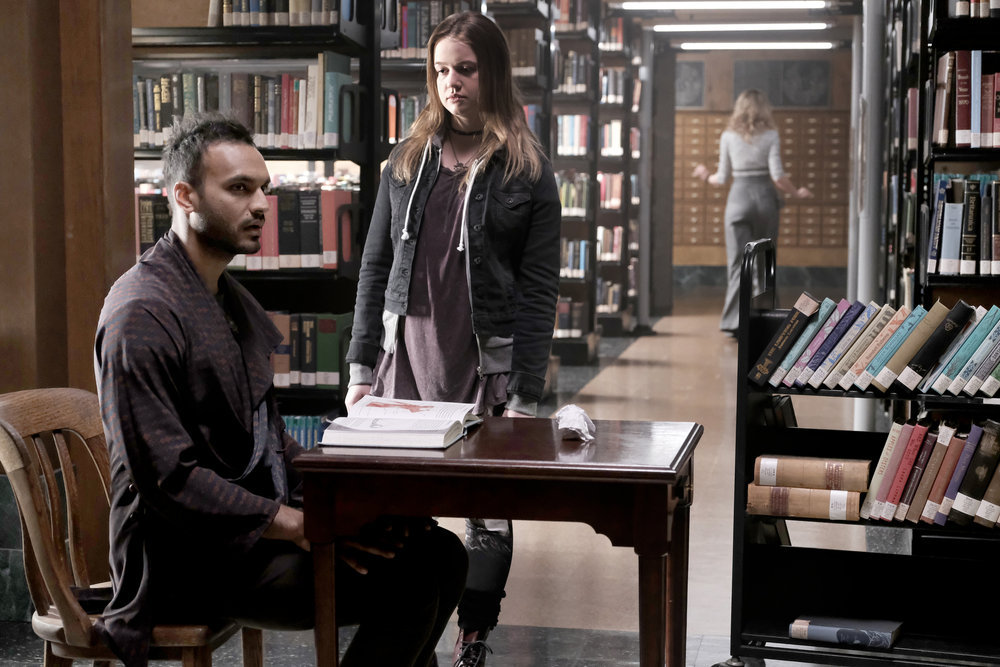 Penny and Kady have no choice but to accept an offer of help from Penny’s adolescent library supervisor once she follows Penny into Kady’s head, and realizes what they’re after. She also wants to get into the Poison Room, but for her own reasons. Can they trust her, or will she only get them into deeper trouble? Raynard’s son John wants to help kill Raynard after dealing with him and his manipulative ways, but how will he be able to help them if they don’t get the book?