Last week’s episode ended with Miss Piggy being arrested, how she was able to get off the hook and return, I couldn’t tell you. This week’s title of The Muppets,“Pig Out,” speaks for itself and has double meaning. Not only is Miss Piggy free and out of jail, but she also manages to go out for a night of fun.

Fozzy makes a comeback and returns as the show’s hype man/comedian, except he’s sort of lost his touch. Well, not sure if he’s ever really had the gift of making others laugh, more like others laughing at him at his expense. Poor guy, he’s had a rough few weeks trying to make it work to his niche. Needless to say he really isn’t doing much as a hype man by either making people laugh or pumping them up, tough crowd.

Though Fozzy is struggling to keep the crowd pumped, Siskel and Ebert -I mean, Statler and Waldorf – seem to be having an unusually good time. Let me remind you, they’re known for being grumpy old men-Statler and Waldorf that is. They’re having a good time because they’re heckling Fozzy and poking fun of his jokes, which I admit was pretty entertaining.

The crowd seems to be warming up as Fozzy uses an air cannon to shoot out shirts. When in doubt, give away free stuff. Free stuff makes people go crazy! Statler and Waldorf continue to laugh and heckle Fozzy. Not realizing, Fozzy shoots out a shirt to the audience and knocks out Statler. Oops! An ambulance is called, he’s wheeled out and still talking smack. Yeah, he’s fine. Keep in mind, guns are not the answer, even if they only shoot over-sized show t-shirts that you’ll never wear.

As a very conscious Statler is wheeled out and taken to the hospital, Kermit tries to pick up the pieces and deflect any added attention, he instructs Fozzy to continue and tell his jokes. A Muppet that seems to work in HR offers to help hide the incident and strongly implies he’s good at that. Hmmm….that seemed a bit sketch, makes you wonder what else we may not know. Do some of The Muppets have secret or double lives? More on that later…

Meanwhile, the show is over and the crew goes out for a drink to unwind, Beaker does a hilarious imitation of Miss Piggy. Truthfully, anything that Beaker does or says is funny. Fozzy opts to go out and instead visits Statler at the hospital to apologize and asks if there’s anything he can do. What he didn’t know is that he’d end up leaving the hospital with an extensive list of items Statler requested. Fozzy returns hours later and believes Statler is dead after he sees a sheet over what seems like his body. In disbelief, he pulls the sheet off and finds a sign that reads, “sucker”. Who knew Statler was quite the prankster? We see Kermit and Miss Piggy have their first confrontation and argument since what seems like their breakup. Miss Piggy comes to find the crew goes out after every show and is outraged (of course) that she’s not invited. Kermit so calm, cool and collected tries to explain he’s not invited either. No “bosses” are invited to outings after the show. Piggy makes no sense of it and insist she be invited. She attempts to compromise with Kermit and says that if they do ask for her to come out, she will say no. The way they argue is a bit nostalgic, just like old times sake- some things never change.

While Kermit is talking to a few of the guys informing them of the current situation, Janice says hello to Sam. No big deal right. To Sam it meant everything.

Piggy schemes Kermit into convincing the crew to ask her to join them and hang out after the show. She promises to say no, stating it’s the principle of being invited. The guys agree to invite Miss Piggy out on their next outing next time they see her. Conveniently enough, she walks by is invited and says YES! Kermit’s not too happy about this.

We should’ve known The Muppets meaning of a good time meant karaoke, they love to sing and perform, even if it’s just for themselves. Despite having been forced to invite Piggy, everyone is having a blast, this team outing that seems like a much needed outdoors retreat for everyone to unwind. The highlight of this week’s episode was definitely seeing The Muppets characters come out. Though very inaudible, Chef got down with “Rapper’s Delight”, perhaps it was his Swedish accent. (By the way, did anyone else notice Chef is half Muppet, half Human? Just an observation.)

Beaker (who has a killer falsetto) and Bunsen performed a very heartfelt duet.

Ed Helms meets up with the gang and participates in some karaoke. Sam notices Helms buys Janice a drink and is overwhelmed with sadness and jealousy which leads him to sing “Hero” as his relishes in his unrequited love for Janice.

Very reluctant to keep the festivities alive, Piggy convinces everyone to keep partying and not be concerned about work tomorrow, she tells them it’s okay to show up late, she does it all the time. She’s the boss.

The party keeps going as Helms takes lead vocals with “Don’t Stop Believing”, drinks are going around, everyone’s having a good time. My concerns being at this point, how is anyone going to make it to work tomorrow? Helms is quite the party animal, and helped bring out the wild animal everyone. I’m sure he’s quite familiar and has had to nurse a hangover or two in his day, but what about the rest of the gang, will they wake up and still be drunk? 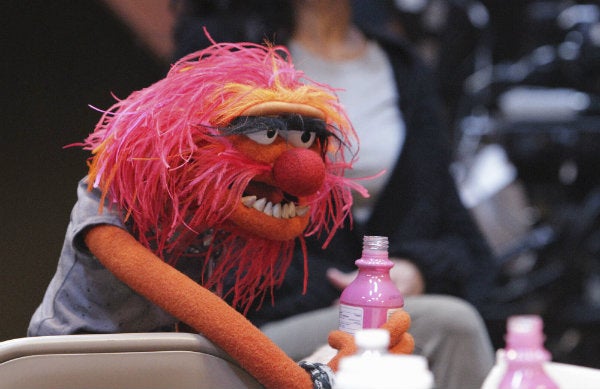 Not so party Animal

As expected, everyone shows up to work late, still drunk and hung-over. (No one to be found sleeping on the roof thankfully.) We see a very upset Kermit, rare and unlike his character. There’s not enough time to prep for the show considering everyone’s post inebriated conditions. He knows he has to do something. He convinces her to tell the crew she can no longer be seen or hang out with them at the risk of it tarnishing her image and reputation.  Brilliant! Kermit’s a smart guy who’s sometimes not given enough credit, he can play the game too, and he knows Miss Piggy better than anyone else. He knows how she’s wired and how pig-headed she can be.

By far my most favorite episode! Not only because Kermit outsmarted Miss Piggy, but also because the characters personalities came out in depth, they were fun, carefree and they know how to party. A bit nostalgic seeing The Muppets getting along with one another and singing in harmony, just like The Muppets we grew up seeing and love.