Tweetable Takeaway: Why are there so many songs about rainbows?…Tweet

This week’s episode of THE MUPPETS we saw Kermit getting stressed as work became a little too much to bear. Per Denise’s suggestion, though Miss Piggy would argue was her idea, Kermit took a much needed break at a yoga retreat to manage his stress, which is where we met this week’s guest star, Jason Bateman.

Bateman recognizes Kermit and immediately tries asking him for help with a production he is working on. He expresses needing a costume designer, a lighting guy and someone who works on programs for his daughter’s school play which he is directing and is running on a limited budget.

In Kermit’s absence, Associate Producer Scooter was next in line to step up and fill in for Kermit as Executive Producer, though Gonzo expressed some concern and jealousy over his responsibility.

Scooter being forced to take the driver’s seat accepted with a bit of fear, little hesitation, but much excitement assuring he had everything under control.  Naturally, since Kermit is out of the picture, and perhaps also a combination of Scooter’s luck, everything wildly goes wrong and continues to spiral, potentially compromising the show.

Scoote, beginning to feel confident with how things are going, is feeling generous and offers to buy lattes for the crew as they begin to set up and make last minute touches before the show. Feeling a bit stuffy, he decides to turn on the air conditioning unit after being warned of the blue strip of tape Kermit has indicated as a “do no touch”. The unit shuts down to say the least. There’s some rattling and a big thump. Beaker is completely covered in an icy slush and is frozen. Unless you’re a Muppet trying to help Beaker defrost, the only thing to do is laugh! If you’re familiar with his character, you can’t help but continue to chuckle as Bunsen tries to melt the ice and watch Beaker’s expressions. Though he doesn’t talk, and instead mumbles and squeals, his expressions are incredibly priceless!

The broken AC unit does not only affect Beaker, but ruins Miss Piggy’s winter wardrobe and she’s left with nothing to wear. Her clothing rack is completely soaked and carried out of her dressing room as a realistic and not so positive Uncle Deadly tries to calm down Miss Piggy and make her realize the reality of it being unsalvageable.

Just as Beaker is beginning to come back to room temperature, the coffee Scooter treated everyone to arrives and ends up all over Beaker, burning him to a poor little silent crisp. The melted butter from Miss Piggy’s head sculpture Swedish Chef was working was a result of Sweetums crashing while moving it.

While all is going downhill, a very desperate and infatuated Sam attempts to sweet talk Denise in hopes of getting some attention. Completely uninterested, a free spirited Denise walks away and proceeds with her day. Will there ever be a love connection between these two?

Finding some time and not feeling as stressed as the crew, Pepe and Rizzo prank call Chip pretending to be the FBI. Insert laughs here. Week after week the constant jokes about Chip, subtle or obvious, are my absolute favorite, it doesn’t get old. He’s creepy, socially awkward and definitely stands out from the bunch, making him the perfect target for the butt of the joke.

Despite all the technical malfunctions and accidents occurring on the set, like the lights bursting and blowing out the power, the show must go on, even though they’re left no electricity to work with. Working on limited resources, Up Late with Miss Piggy airs with an MTV unplugged feel, using candles to light the set proclaiming it is a way to raise awareness for energy conservation. Adding to the ‘unplugged’ atmosphere, pop acapella musical guest star, Pentatonix performs. Very clever.

A great, yet very minimal appearance by Pentatonix. It left something to be desired, where was the rest of the performance? It was probably the shortest musical guest appearance I think I’ve ever seen in a show. Statler and Waldorf added a bit of humor as they sang and contributed to the performance by adding baseline and their own personality.

Still having a difficult time relaxing and unwinding at the retreat, at first a reluctant Kermit agrees to help Bateman only to get kicked out of the yoga retreat for being disruptive and breaking a no phone policy.

Feeling bummed out for being kicked out, Kermit stops by Rowlf’s Tavern for a night cap. Rowlf offers advice on how to deal with life and shares how he unwinds, encouraging Kermit to do the same-however frogs really aren’t into chewing things as a therapeutic measure. 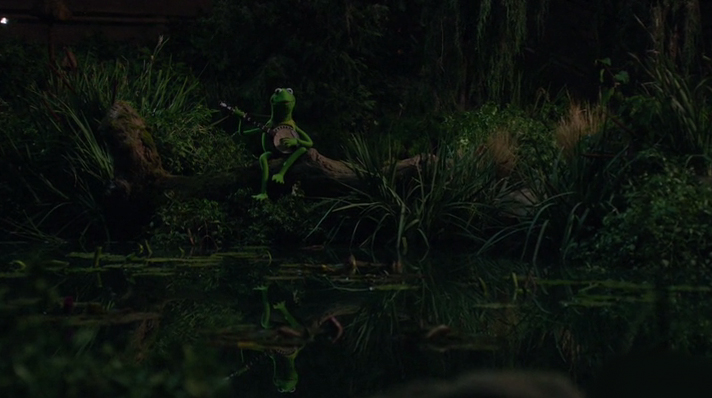 Kermit is finally able to release some stress by singing and playing his banjo on a self-made swamp reminding him of home.  He serenades us with his classic, “The Rainbow Connection”. An absolute perfect blend between past and present for a long time Muppets and Kermit fan.

This was an all-around great episode, it seems as though the show has found its rhythm and is striding along beautifully. It continues to thrive and does a great job involving the entire Muppets cast, making it a lot more entertaining and enjoyable to watch.

There’s an overall balance between the storyline, the characters, and the jokes. It continues to keep me laughing week after week and is something to look forward to on Tuesday nights.