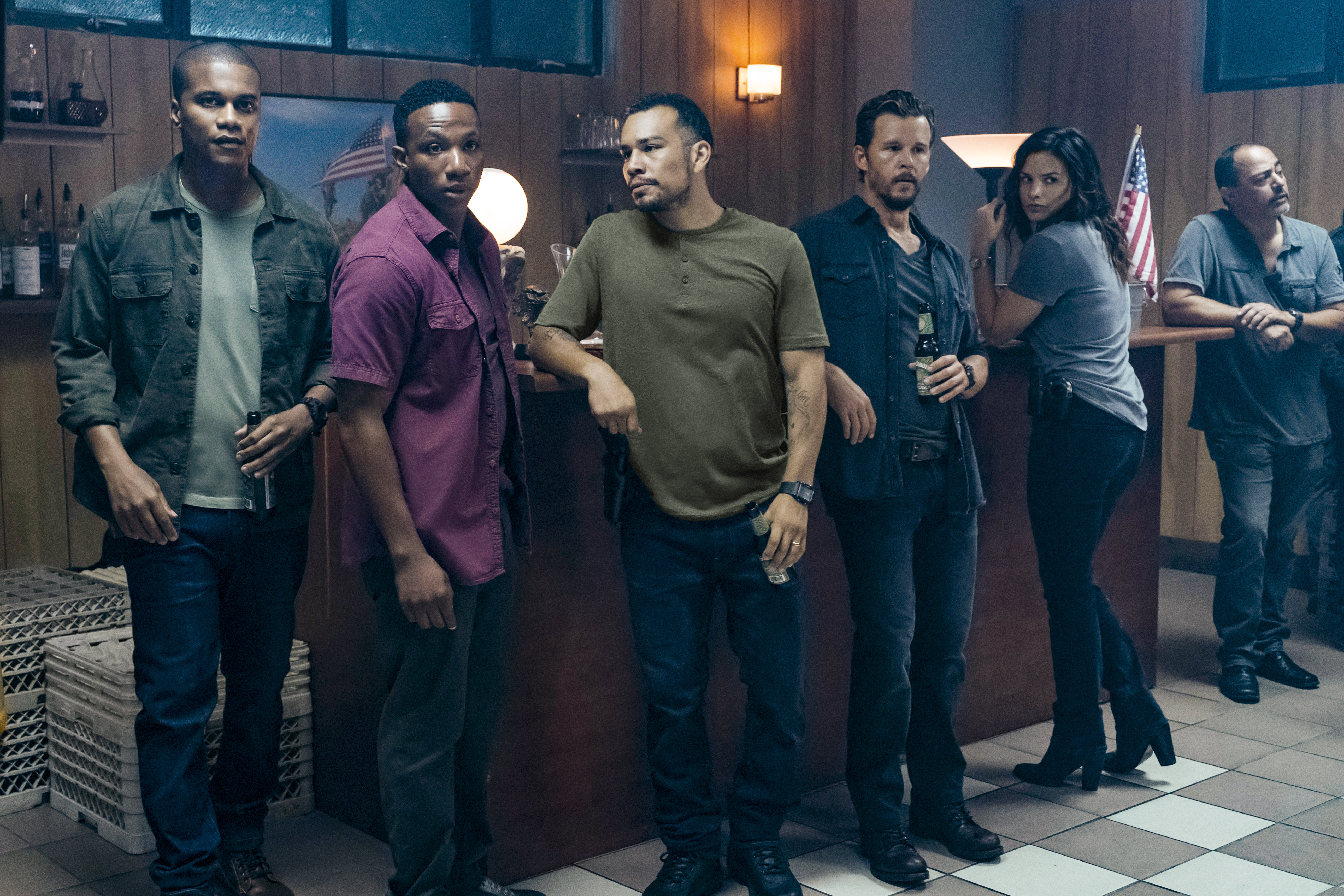 The opening sequence starts with a bank robbery, a robbery that we have seen time after time. But Crackle’s new original series takes that familiar scene that we’ve seen many times and flips it. The bad guys who rob the bank and assault an innocent victim are police officers – officers who are sworn in to protect and defend. Except, these corrupted cops only have one thing on their mind – to protect and defend themselves and others who are part of a police gang called The Ravens. And while the first opening sequence was exciting, it was the only scene that really stuck out in the pilot episode of Crackle’s new series The Oath, which focuses on the secret societies within the police workforce. Based on creator Bill Halpin’s own experience while working in South Central, the series attempts to take the viewer deep inside the underbelly and expose a side of the police force we have never seen before. Except, The Oath only skims the surface, never really diving deep into who these police officers are, why they do it, and their true motivation – except they want to stay alive and out of jail.

The Oath, which debuts all ten episodes on March 8th, follows a gang of corrupt cops led by Steve Hammond (Ryan Kwanten) and his three crew members – his adopted brother Cole (Cory Hardrict), Pete Ramos (J.J. Syria) and Karen Beach (Katrina Law). The four get arrested by the FBI and now have to operate under the shadow of the Feds while keeping the secret from the other Ravens as well as other rivalry gangs both within in the police field and outside as well. Each struggle with their own personal issues, in an attempt to make them three-dimensional, but their issues are pushed on the back burner for the gang. The Ravens are also forced to work with young FBI undercover agent Damon Byrd (Arlen Escarpeta) and sell him to their fellow Ravens and other cop gangs, which proves difficult. But it is Bryd who pushes our story into gear and becomes one of the most interesting aspects of the show. 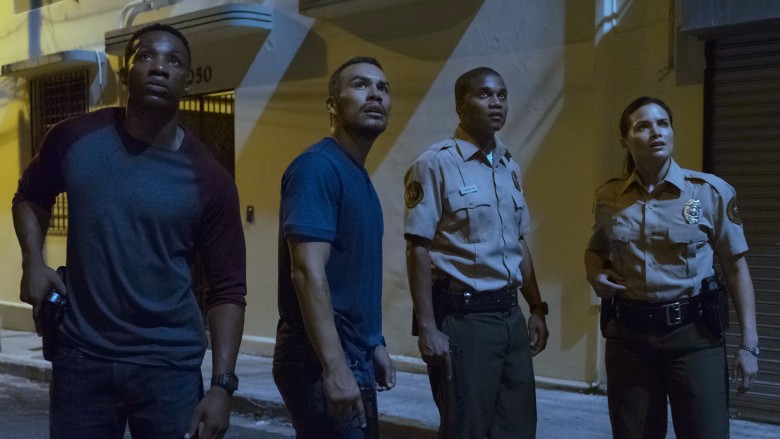 Executive produced by Joe Halpin (“Hawaii Five-O”, “Secrets and Lies”) and Curtis “50 Cent” Jackson, the show is based on Halpin’s own experience as a member of the cop gang known as the Reapers. While the premise is simple, it works. Four gang members are forced to work with the FBI and an uncover cop to avoid jail time, but it’s the execution that is shaky. With weak character development, cheesy dialogue, and an extremely slow-moving plot, it isn’t until episode four that I became invested in the story, ready to see what happens next. The fact that the show is releasing all ten episodes is the best move because the episodes themselves are not strong enough on their own to make it a weekly series.

Based on the first five episodes I have seen so far, the series falls flat because the priority is plot before characters. But the plot itself is pretty basic, which means we should be watching the show for Steve Hammond and his Raven crew. Unfortunately, Hammond and the Ravens are used more for exposition purposes for the majority of the first few episodes, that by the time they’re stories hit the ground running, we’ve probably stopped watching.

Pilots are obviously hard because there is so much to accomplish within the episode. It has to introduce us to the main characters, introduce the plot, and also set the tone for the show itself. It’s the second and third episode I watch to see if this is a show that I want to continue watching. Are the Ravens compelling enough? Is the plot interesting? In this case, am I at the edge of my seat wondering if the Ravens are going to fool their fellow members and the other gang The Vipers? Are able to stay alive? Do I truly feel what’s at stake for Hammond, Cole, Pete and Karen? The answer is not really. 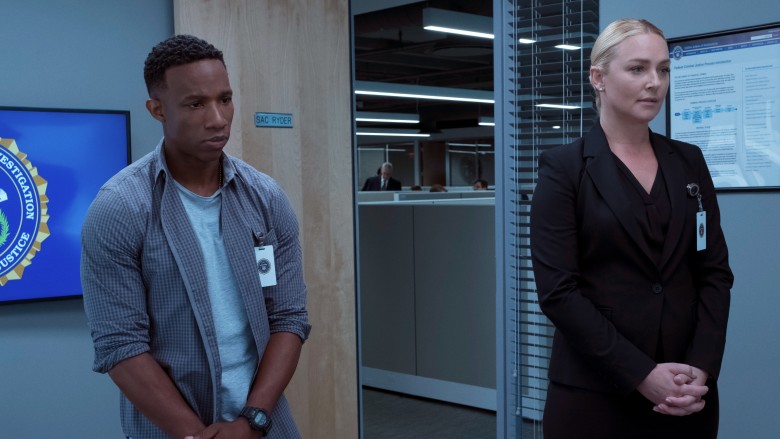 The most interesting character is FBI undercover officer Damon Byrd and that’s because he so far the most well-rounded of all the characters. Right away it’s established that he’s an idealist and he is confident in his abilities to do his job. But after a job goes wrong, he quickly begins to see how easy it is get caught up in the criminal organization. And we get to witness how simple it is to be swept into this life, which gives us an alternative perspective into this criminal life that the other characters can’t give us. With Halpin’s own experience of being an undercover cop for eighteen years, Halpin channels what he experienced into Bryd’s character which is another reason he is a more dynamic character than Hammond and his crew. If the series would explore the Ravens more deeply like they do with Bryd’s character, it would elevate the series in a way The Shield did for a criminal cop drama.

With a basic plot and flat characters, The Oath uses handheld, flashy camera movements to set the look and tone for the show hoping to make it more suspenseful than it really is.  Instead, it’s more of a distraction. Quite a few times I wished the camera would stop moving and just let the show breathe. The blazing sun and hot Puerto Rican heat added to the grittiness and tone enough that it didn’t need the flashy movements. I couldn’t help but wonder if the camera style was there because the show didn’t trust the story to be compelling enough so it wanted to distract us from the weaknesses of the story.

The problem is there is so much content to watch – especially this month it seems – that The Oath needs to be amazing. It needs to grab us from the beginning and throw us deep into the gang life and immerse us in the story before we can flip the back button on our Apple remote. It uses flashy camera movements and a gritty look to set the tone, but it takes too long to establish the stakes and get the story moving.  However, with all that being said, once you do reach episode five all you want to do is watch the next episode because the stakes that the characters have been talking about for the first three episodes is finally apparent.  But whether or not it all pays off will be determined on March 8th when all ten episodes are released.