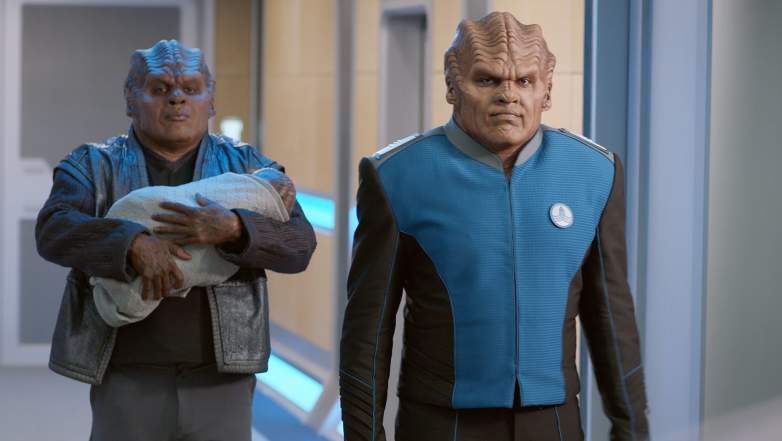 The Orville might be the worst show I’ve seen on Fox. Nothing makes sense on a very fundamental level. This show is officially not a comedy, and yet officially has to be a comedy, and it’s wrecking my brain. I can’t tell how they sold the show, what was the pitch? Because unless Seth MacFarlane sold the show pulling a Troy McClure, nothing makes sense.

We spend the whole episode essentially trying to figure out if Bortus’ female hatchling should have a sex change against her will. And if that doesn’t sound funny, guess what, it’s not! And if they play it off like it’s supposed to be funny, guess what, they don’t! And if there’s some bigger moral at play or a reason or a method or anything, anything, just anything, please, there’s not! For the life of me, the entire episode makes no sense. There’s a stereotypically dressed spaghetti western Mexican man dancing to Cyndi Lauper. That’s supposed to be a joke that might be dated now, but, you know, 300 years from now there’s a Cyndi-ssance, I guess. And then there’s not another “joke” for a solid ten minutes. If someone would ask me what this show was about, I would probably say, “I don’t know.” And it’s not because I don’t understand what’s going on, it’s because it’s not a show. For some reason, The Orville is convinced that one-hour is only synonymous with drama, as if the dramedy category hasn’t thrived for the last decade. Sopranos legitimately has more jokes than this show.

It’s equally frustrating to figure out why The Orville departed from its premise. We were made to believe that Ed Mercer is a good captain with bad emotional problems. Instead, he’s a clueless captain who likes to be snarky, sometimes. Kelly Grayson, the best right hand in the galaxy and worst wife, is sort of reduced to an OK… whatever. I mean she’s a jack of all trades, master of none, and doesn’t seem to do anything for Ed anymore. Ed is so over this relationship that it’s like they never dated to begin with. To painstakingly stake the pilot on a premise that would be abandoned immediately seems more than misleading.

The Orville, the ship, as well as The Orville, also lack the central thesis of any good space show: the answer to the age-old question, “WHY?” Why are we here, why was the Orville built, what’s going on? They could be space traffic cops or undercover researchers, anything is plausible at this point, and that’s bad. Space is big, and without an omnipresent theme, it comes off as too big. Why do we care about Bortus’ baby or Ed being trapped in a zoo? Outside of human decency, the crew has no mission that they have to adhere to, so these problems aren’t really problems. There are no orders to disregard, oaths to betray, or missions to complete. It’s just a void of nothing, hoping to be filled.

There’s not a lot to discuss in this episode, save for the ending. For some reason, Kelly decides to represent Bortus in his court case to keep the gender of his child. At one point, Ed brings back a woman of Bortus’ species who was living as a hermit writer all these years, as if that was gonna change thousands of years of tradition. Guess what? It doesn’t. The trial concludes with Bortus’ baby changing her sex to a male. There is no moral or any reason, it’s just because. It’s this sort of detached hopelessness that is neither funny nor insightful. Much like real life, we lack the perspective of things happening and are forced to accept that the universe decided to randomly conspire against us this week. But that’s silly because The Orville has confused humanism with banal nihilism.

But throughout all of its problems, nothing is more glaring than the absolute lack of comedy. It needs to be said again, there are entire scenes without a joke. This would be fine if that was the premise of the show, but it wasn’t, neither was it marketed to be such. I thought the pilot was pretty thin on jokes, but this is brutal. The Orville needs a rebranding as a Trekkian drama, and even that will leave people wanting more because the plot is never good. But also, it’s important to remember that Ed Mercer has no definable trait, and he never actually saves The Orville from danger. Every good captain has some trait or ideal that guides their principles. Picard was a man of humanist reason and deep hope, an idealist willing to do what was right in the ever-changing universe. Sisko was a father and a disciplinarian who had to not only raise his child but the space station he called home, committed to seeing both of them thrive in a universe that would eventually be without him. Ed sometimes hates his ex-wife, and a lot of times is off-screen. Unless The Orville actually gives something for Ed to do, beyond retrieving a hermit or living in a zoo, but something that actually reflects his character, the show will continue to suffer.

I do not have high hopes for The Orville moving forward. The problems are at such a deep fundamental level, that it will either have to live up to its premise as a Seth MacFarlane space comedy or admit once and for all, it’s a bad new series of Star Trek.