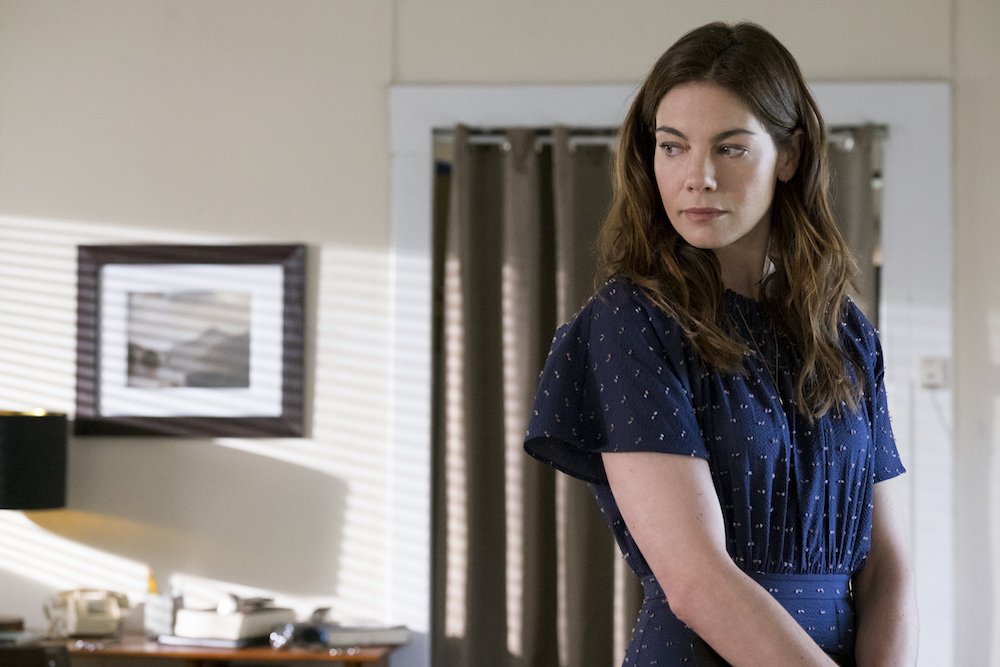 Everyone has doubts, it’s sorting through these doubts that make true belief so strong.  If you’ve sifted through the pros and cons, have studied both sides of an argument and come to a conclusion, your belief is going to be a strong one.  People believe all sorts of things that aren’t true, and sometimes in the face of glaring proof of the wrongness of their beliefs, people will dig in and double down, strengthening their resolve despite the glaring proof the opposite is true.  Last season Sarah is the one whose belief was unshakable despite proof Cal was a murderer and a psychopath.  As long as she was Co-Guardian of the Light, she compartmentalized all the terrible things they did to keep the movement safe, but things have changed this season. 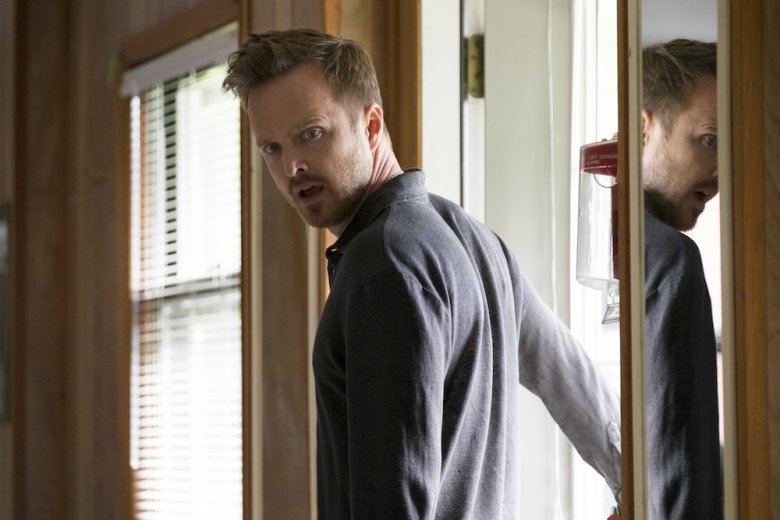 With Eddie’s ascension as “the chosen”, and Sarah and Cal’s relegation to merely being followers again, Sarah’s had time to be confronted with the gravity of her actions.  She feels an overwhelming amount of guilt, as well as a desire to be punished for what she’s done.  The problem is Eddie has taken the movement in a new direction.  He’s done away with the old ways and punishments, and formed the Meyerist religion into a more inclusive, tolerant, and loving one than it was before.  When Sarah sought out Cal’s help to do a little BDSM work to cleanse her soul, she came face to face with a buried realization and fear that Meyerism may no longer work for her.  Meyerism has been what she’s based her entire adult life on.  It’s what gives her a sense of self worth.  What is she if not a Meyerist?

While cleaning out her mother’s attic, Sarah finds an old 8mm movie reel.  Curiosity gets the better of her, and she takes it to see what’s inside.  It’s an old film of her parents from the early days of the Meyerist movement.  Younger versions of her parents and other Meyerist disciples frolic in nature with Steve, but spliced at the end of the film is something strange.  Steve is tied up in the same way Cal tied Sarah up, and a woman’s voice commands Steve what to do.  He refers to her as “Lil” and she clearly has a superior role to Steve in this situation.  Sarah’s intrigue leads her to show the clip to her mother, pressing her for information about who the woman is.  She learns it was a woman named Lillian who was crazy, and an early member of the movement.  There’s something about the power dynamic between Lillian and Steve that Sarah can’t shake.  Who is this woman?  Was she the true originator of the movement?  Is Steve a false prophet who took someone else’s idea and ran with it?  If so, what does that mean for the movement, and for Sarah? 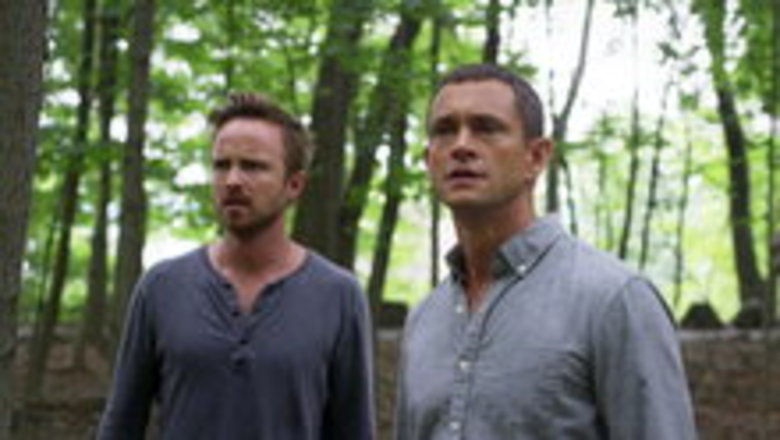 Things are complicated now that Eddie has lifted the guards and opened both the compound and the center to anyone who wants to visit.  A bomb threat has everyone on edge, questioning Eddie’s leadership as well as their security.  In the midst of all of this tension, Cal and Mary return right in the middle of Eddie’s address to the followers.  Cal’s held a position of power in the movement for a long time, and he has an eloquence that Eddie lacks.  He could use it, and twist the situation to his advantage to make Eddie look bad, but he doesn’t for some reason.  It bothers Eddie, and he doesn’t take too kindly to Cal’s return.  The conditions of Cal and Mary’s reintegration into the movement are severe, and meant to humble Cal and let him know who the boss is.  Cal will live in dormitories with the novices, be on a work detail, and be given no special privileges.  The dressing down chafes Cal, but he has a plan to get quickly back into the movement’s good graces by circumventing Eddie, and going directly to Vera.

Cal uses both written and photographic proof of Steve’s molestation of him to leverage his way into leaving the dog house.  He doesn’t mind if Eddie plays Jesus in the movement, Cal just wants to be the CEO.  Vera is powerless to deny him, otherwise he’ll take the proof to Eddie, who he knows will do the right thing and address the problematic leader of the movements sordid past publicly.  It would destroy the Meyerist movement completely.  Why does Cal want to be back so badly?  Like many people in cults, he’s been made to feel he can’t make it on the outside.  Being back is like a security blanket that makes him feel safe again.  The real problem is once Vera convinces Eddie of allowing Cal to take on a role in the movement Eddie isn’t comfortable doing, will the tension between these two end up destroying everything?  When they take “the medicine” together and trip out, things start in fist fight, but they end up opening up to each other in a strange and intimate way about the true nature of Steve and the light.  Is it possible Cal could be an ally to Eddie? 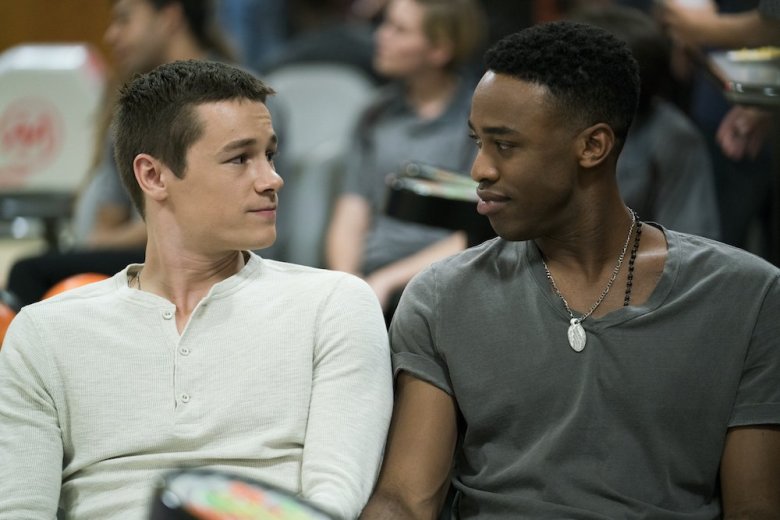 Hawk continues to be a ball of sexual and emotional confusion.  There’s been an obvious sexual tension between Caleb Mathews and Hawk since they first met, but it bubbles over in the men’s room when the two kiss.  It’s clear Hawk isn’t sure how he feels about the whole thing, but before he can get a grip on what just happened, Caleb and his group move out of the center, and won’t return any calls or messages.  Hawk has been the most tempestuous character in the entire show.  He’s angry all of the time, and doesn’t even know how he feels about things himself.  The main character flaw he has, is that he’s so easily influenced by nearly everyone he spends time with.  In the first season he almost left Meyerism for a girl, but then went back and shunned his father while under Cal’s influence.  Later when Eddie became “the chosen” he turned his back on Cal and his mother.  He changes directions so many times in a season it’s nearly impossible to peg him down.  Will he dabble with same sex relationships now that Caleb kissed him?  It doesn’t look like it, only because Caleb shuts him out.  If it weren’t for that, he’d clearly find himself involved in one.

The biggest reveal of the episode, and one that was clear if you put all the pieces together, is that Vera’s mother is Lillian from the film Sarah found.  Lillian may have originated the movement only to be kicked out by Steve and the others, stuck on the outside watching them pervert her intentions.  She knew all about Steve’s molestation of Cal, and her doomsday version of the movement has entrapped her own daughter into doing something she doesn’t want to do.  Is her prophecy of the future death of Eddie and the destruction of the movement real, or is it the vindictive revenge of an unbalanced mind?  There’s a diabolical strength to Lillian that Vera is unable to deny, but will she be true to her mother, or help Eddie to survive her mother’s deadly plan?