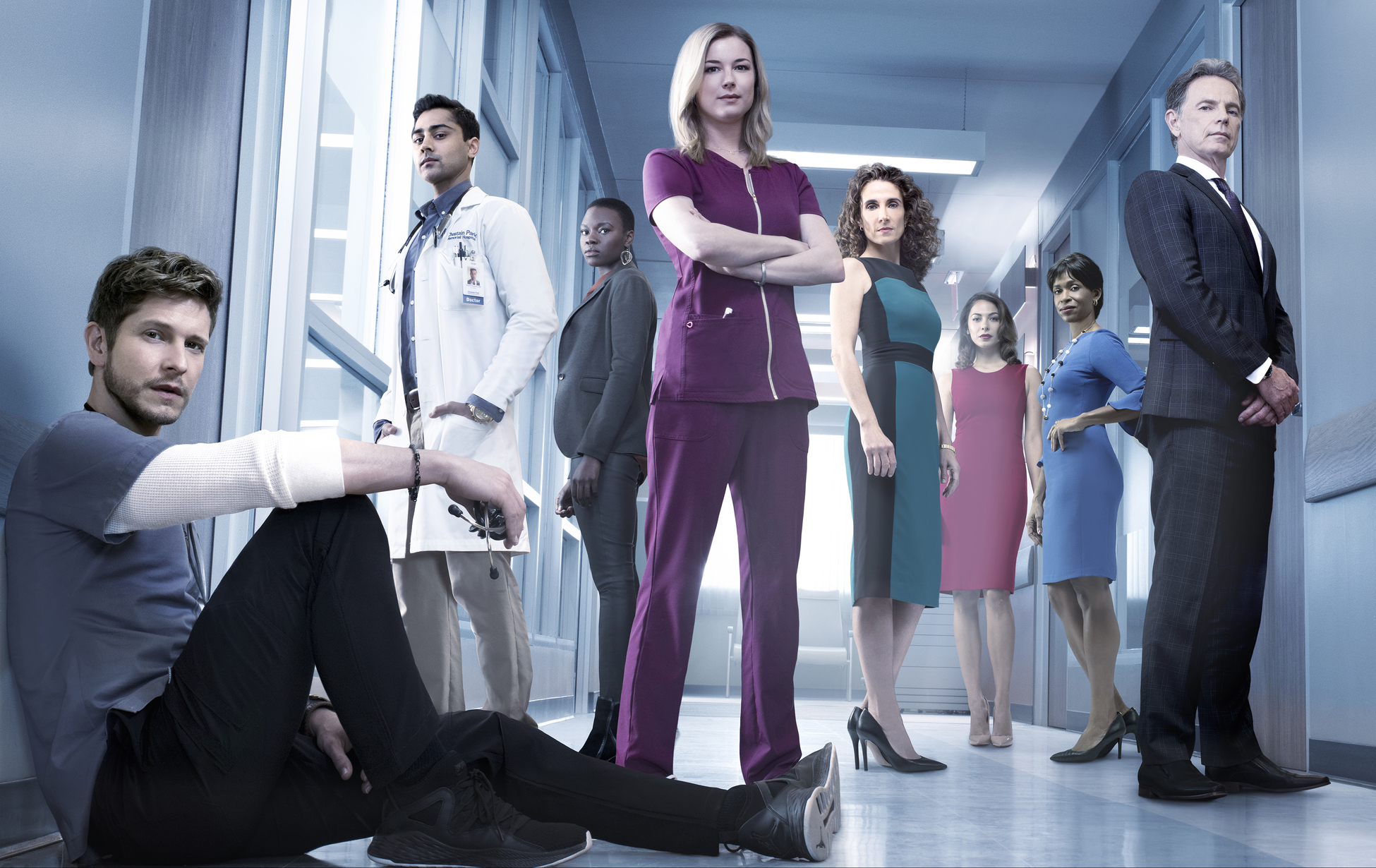 The Resident is a new medical drama on FOX, that’s not easily written off as just another hospital show.  There’s dirty secret at the heart of Chastain Memorial Hospital, and first year residency intern Devon Pravesh (Manish Dayal, Halt and Catch Fire) is thrown into a chaotic battle of wills between celebrity Chief of Surgery Dr. Soloman Bell (Bruce Greenwood, most recently in The Post) and hot shot senior resident Dr. Conrad Hawkins (Matt Czuchry, Gilmore Girls).  From the very first scene The Resident distinguishes itself from being just another ordinary hospital show, as nurses take cellphone pictures of an appendectomy patients penis.  Dr. Bell turns what should be a routine surgery into a tragedy when his jittery hands ends up nicking an artery, killing the patient.  What happens next is a blame game where Dr. Bell brings up his coworkers embarrassing pasts to basically blackmail them into helping him cover up his own negligence in the patients death.  It’s a shocking moment, but one that doesn’t seem all that far fetched.  The Resident asks what happens when a dangerous surgeon has too much power, and no one can rein him in? 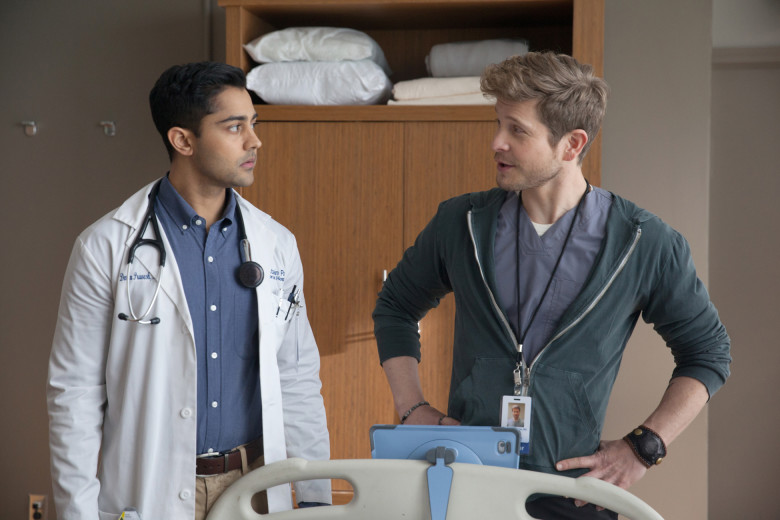 The Resident was created by Amy Holden Jones, Hayley Schore, and Roshan Sethi, and the pilot was directed by Philip Noyce (The Quiet American).  The pilot is fast moving and wastes no time getting to the meat of the story.  Devon’s first day at the hospital leaves him questioning his career choices, especially given Dr. Conrad’s hard and demeaning treatment of him.  Conrad flies by the seat of his pants, but has a deep understanding of medicine, illness, and the easiest way to get the best results.  He continually encourages Devon to throw out what he learned at school, and pushes him into intense situations to test his abilities.  Conrad holds the kind of power over residents that can shape the rest of their careers.  Screw up or go against him, and he can take away the internship at this prestigious hospital, damaging a residents future career options to the point where they may leave the medical field entirely.  Beneath Conrad’s tough exterior, he really cares about the work and the patients, and it’s soon clear he’s the conscious of the hospital.

At the other end of the spectrum is Chief of Surgery Dr. Bell.  He’s become a celebrity surgeon and the face of the hospital, but has a terrible track record of having patients die on him during routine surgeries.  The staff has begun calling him HODAD: Hands of Death and Destruction.  His negligence and inability to perform basic procedures without complications is an open secret within his staff, but he keeps a catalogue of material to hold over everyone’s heads, allowing him to blackmail them all into silence so he never has to atone for his deadly mistakes.  The only person who dares go against him face to face is Conrad, but even he doesn’t have the leverage to blow the whistle on Dr. Bell.  Bruce Greenwood plays Dr. Bell with a slick, smarmy smugness that outsiders find attractive, but those in the know find chilling.  His hands jitter, like he’s got the yips when he’s in surgery, so he takes drugs in an attempt to balance his nerves, but they only appear to make things worse.  He’s more concerned about appearances than actualities, which if you know any surgeons (and I do) is incredibly important to them.  His deadly ways can’t continue forever unnoticed, and the staff is all waiting for the day they’re no longer under his thumb, and their patients will be safe. 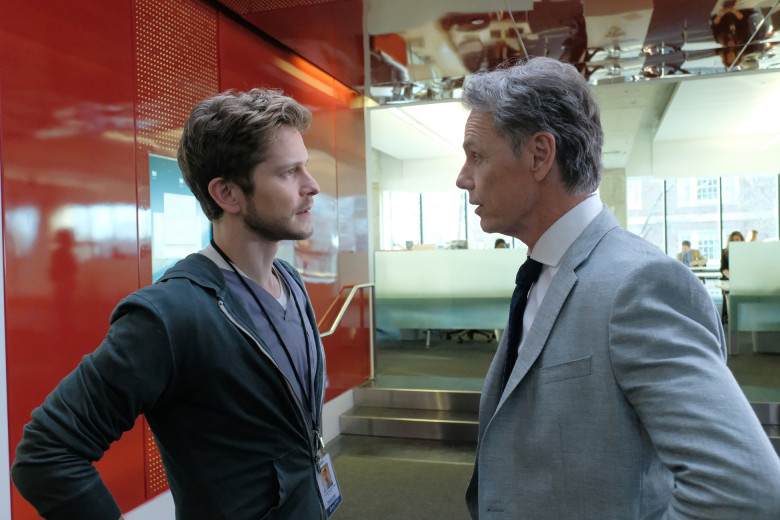 Devon learns a lot in his first day, and experiences both the highs of saving a life, and the lows of having made a detrimental mistake.  His relationship with Conrad is a tough one at first, but he survives and earns Conrad’s momentary respect.  It’s not going to be smooth sailing from here on out though.  Dr. Bell is a predator who ensnares nearly everyone into keeping his dirty secret.  Dr. Mina Okafor is a headstrong Nigerian doctor who’s the only person trained on the hospital’s new robotic operating machine, Titian.  She learns first hand that there’s no denying Dr. Bell when he has his mind set on something.  When he wants to do the first surgery with the machine, despite never being trained on it, she refuses and finds out just how low Dr. Bell’s threats can go.  Dr. Bell uses the threat of losing her visa as a cudgel to get her to comply.  When it becomes clear to her that he’ll kill the patient using the Titian, she remotely operates the machine while it appears Dr. Bell performs the surgery during a live stream of the Titians first use.  With so much dirt on everyone, who will be able to stand up to Dr. Bell and reveal him for what he really is?

In a world where hospitals make more money the longer they keep patients, Conrad is the kind of doctor who wants to treat people as efficiently and easily as possible.  This can allow him to wander into some moral grey areas, which is where nurse Nicolette (Emily VanCamp, Revenge) finds him at the end of the pilot.  Unlike Bell, Conrad’s grey areas are out of compassion for his patients, but they still pose a moral quandary, especially given Nic and Conrad’s romantic past.  The nurses in a hospital know all, and see all, which means Nic will play an important role in The Resident no matter what the outcome is for Dr. Bell.  She’s also the person who encourages Devon to not give up after he first encounters Conrad and can’t handle it.  She can be both nurturing and strict, which is the right balance needed to navigate the perils of Chastain Memorial Hospital, and keep things from going off the rails. 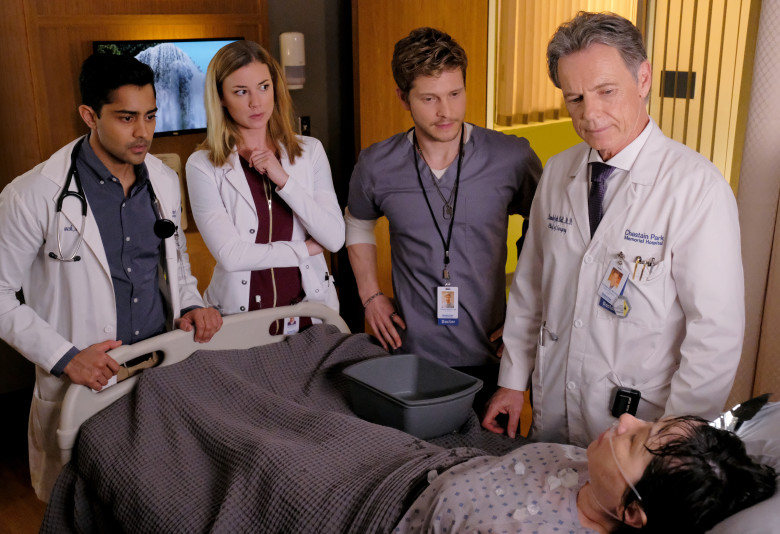 The Resident has an intriguing pilot, and I will definitely continue watching to see what direction they take the show. With a strong premise, and a very watchable cast, FOX may just have the next big medical drama on its hands.