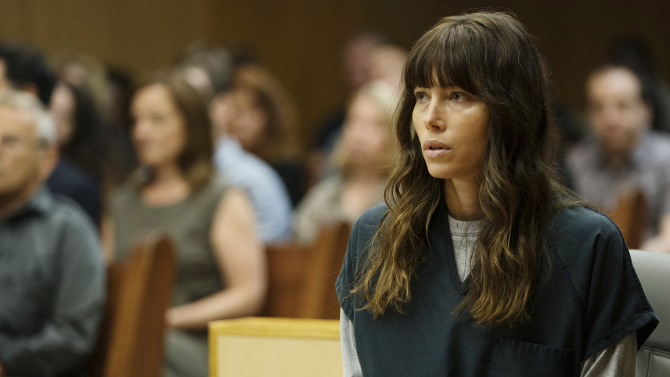 We’ve finally reached the end of The Sinner, and turns out, the answer is fairly mundane. Mundane in the sense that it seemed like we were building to the reveal of some larger sex trafficking slash Illuminati country club cult situation — not mundane in the sense that this is something that happens to people, because man, Cora’s life is awful. Luckily, by the conclusion of the series, it seems like she finally catches a bit of a break.

After last week’s pure flashback episode, we come back to some flashbacks to fill in the blanks. After Phoebe dies, J.D. knocks Cora out because she loses it, and leaves Frankie to pretty literally rocking in a fetal position in the corner. Frankie’s dad comes home, and Frankie tries to explain, but J.D. returns and intervenes. Obviously wanting to avoid any police involvement himself, he points out to Frankie’s father that it’s not going to go well for Frankie, even though it was an accident if they call the cops. Phoebe’s young (not that young, but still), terminally ill, on a lot of drugs, and Frankie broke her ribs administering CPR. Wanting to avoid trouble for his son, Frankie’s father kicks Frankie out, and he and J.D. come up with a plan.

They dispose of Emily’s body but keep Cora locked up in the Bellmont household. Frankie’s dad, a doctor presumably, keeps her barely conscious for the two months of her life she’s missing so that she forgets what happened to Phoebe. The weird bear mask was actually worn by Frankie’s dad to keep from triggering any memories in Cora. He makes sure to exaggerate the marks from the needles he uses to keep her under and suggestible so that when he’s sure she’s forgotten, he cleans her up and drops her off at a rehab center. Cora, with no memory of the intervening months and the evidence of a heroin addiction on her arms, accepts that she became a drug addict. This seems like a wild, wild thing for a person to accept about themselves, but Cora is so excessively passive that it doesn’t come as a surprise.

Regardless of the extenuating circumstances as we now understand them, Cora waived her right to a trial and is sentenced to thirty years. Luckily, she and Mason more or less reconciled last week, and so he comes to visit her with their son. There’s a very touching scene where Cora tells Mason that if it’s too hard for him, she’s okay with him moving on. She actually encourages him not to bring their son, because she doesn’t think weekly prison visits is a good way to raise a kid. Mason, finally seeming to understand Cora, refuses calmly, and assures her that they will be there every week. It’s a quiet, simple conversation, but it’s lovely to see somebody standing by Cora, since everybody else in her life seems to be there primarily to take advantage.

Ambrose explains what happened to Farmer. While they can’t confirm all of the details, they can confirm that the body found in the woods, previously assumed to be Maddie, is a DNA match for Phoebe, Cora’s sister. Knowing for sure, now, what happened to Phoebe, Cora meets with her mother, who never actually reported either of them missing. Her mother accuses Cora of being bad and sinful, surprise surprise, but actual surprise — she admits that she never reported them missing because she assumed they ran away. She’d heard Cora and Phoebe talking about moving to Florida late at night. So in a way, their mother’s failure to report them was meant to be a mercy. She was giving them an opening to live their own lives.

Since that part of Cora’s story rings true, they take her to the Bellmonts’ house, and sure enough, find the wallpaper from Cora’s memory. Frankie’s dad confesses and apologizes; Cora tells him she knows he did it for his son. It’s not clearly an absolution, but since the small amount of fight Cora has shown has been related to wanting to get out of jail before her son is middle-aged, there’s at least some understanding there.

Armed with an explanation for Cora’s heretofore inexplicable murder that at least makes her sympathetic, if still culpable, Cora’s lawyer appeals to the judge. It seems a little farfetched, as regardless of Cora’s now-clear justifications, she still stabbed a man to death in public; while that definitely is down to a psychological issue, it’s kind of frustrating that everybody’s like “oh now we UNDERSTAND why Cora wasn’t in a competent state of mind when she did that.” It shouldn’t matter if you understand why? Clearly, for a woman with no history of violence or anything similar, to march across a beach and stab an apparent stranger to death, she’s not mentally fit. But whatever, Cora’s sentence is changed — instead, she gets two years in a mental health facility, with her release up for review after that.

Talking to Cora in the car while transporting her, we finally get to the root of why Ambrose has been so attached to her case. He obliquely admits that he felt close to her because he recognized some of her behaviors as his own. He also experienced some sort of trauma or sexual assault when he was young, and that’s what has motivated his behavior till now.

The solution of The Sinner is satisfying because it actually does tie up the loose ends. The answer isn’t weird, or fascinating, or mind-bending, but it is whole. We get to see Cora go from barely present to taking some small amount of control over her life — or at the very least, deciding to live it. It’s not something I’d seek out to rewatch, or will rave about to everyone I know, but it was an interesting journey to take.