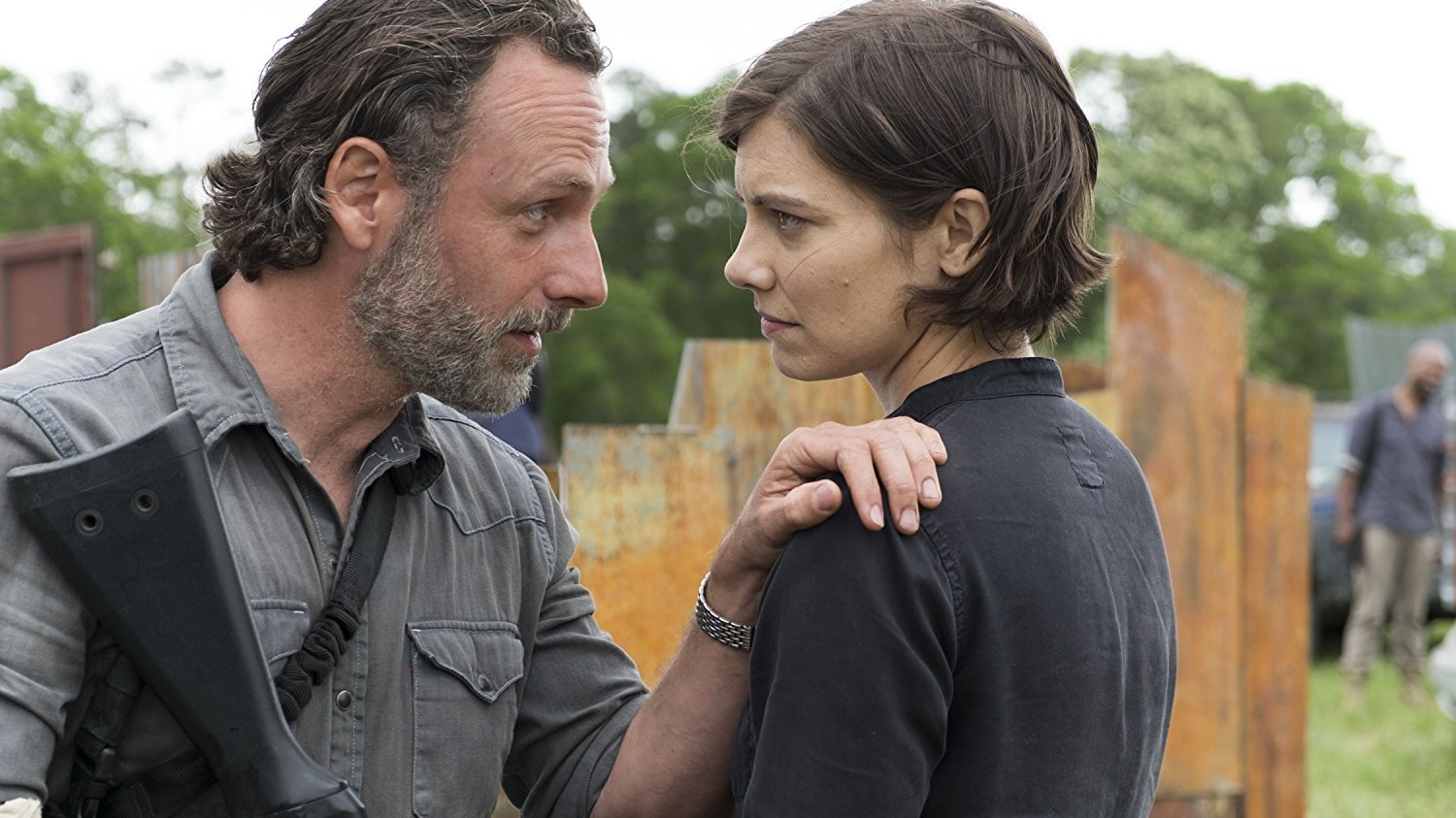 The Walking Dead returns for an eighth season and full on war with “Mercy.” Last season ended when Sasha sacrificed herself to buy Rick and her friends a single moment to fight back against Negan. It doesn’t get more heroic than that. Rick and the others use Sasha’s move to spark a coordinated and violent resistance. Everybody from Hilltop, Kingdom, and Alexandria join forces and resources to launch a full-scale attack against all of Negan’s fortresses.

We haven’t seen fight like this from Team-Rick in a long time. Everyone is focused, on mission, fighting for the best future possible. A future that has no place for Negan. The core leadership of Rick, King Ezekiel, and Maggie all give speeches just before rolling out to attack the main Savior stronghold. Rick is clear, he wants to be the one to kill Negan. Most of “Mercy” is a linear action attack-the-castle story, but it’s broken up by a dream sequence, five years into the future. In Rick’s dream, he has a groomed, grey beard, walks with a cane, but lives an idyllic existence with Michonne, Carl, and Judith. There’s a celebration going on, maybe someone’s birthday or 100th episode. If anyone wonders “why” attack now, the answer is the protection of this dream. Not Rick’s specifically, but the dream of a peaceful future, time for love and family. 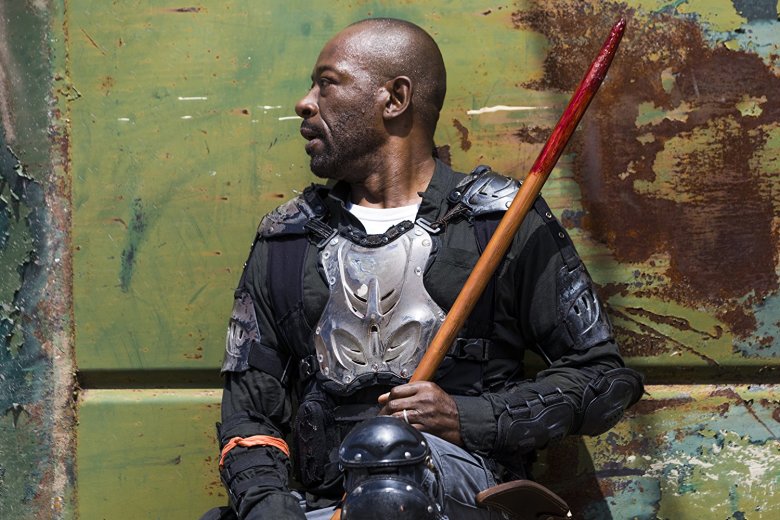 There’s no sign of Jadis or her salvage troops this week. They betrayed Rick and the Alexandrians, but they’re not his target, and probably no threat at all. Intervention isn’t in their nature. The coordinated attack begins with a series of quiet tasks. Savior lookouts at several locations are killed as quietly as possible. Morgan, Daryl, Fr. Gabriel and many others do the killing while Carol, Tara and others set explosives and corral walkers onto the highway to Negan’s stronghold. When it’s time for the attack, they trigger an explosion. Negan sends an armed patrol out to investigate.

Meanwhile, Rick, Maggie, and King Ezekiel convoy the main force of vehicles with extra protection welded to the sides. Dwight has been helping and communicating with Daryl on the sly. He’s turned out to be a great character, often a thorn in Rick’s side, but ally when needed the most. Dwight’s role in this new season will be one of the most interesting to watch. The other two characters in precarious positions are Gregory and Eugene. When Rick rolls his attack force through the gates, Negan emerges with Dwight and Eugene by his side. Rick offers a one-time peaceful surrender to anybody that leaves Negan at this exact moment. 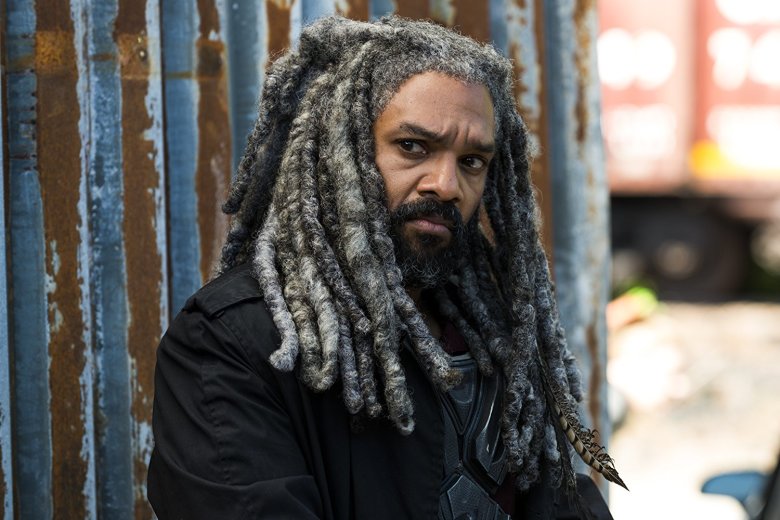 Negan monologues about Rick’s penis issues and his selfish nature. He tells Rick he isn’t prepared to swap lead and lose any of his people at this time. As usual, Negan is confident by an ace hidden up his sleeve. He trots Gregory out to get his Hilltop people to back off. Gregory says only the people of Hillside that support Negan will be allowed to stay at Hillside. Negan and Gregory both expect Hilltop’s fighters to return, but they don’t. Jesus screams the reply they all quietly agree on, “Hilltop stands with Maggie.” Simon throws Gregory off the platform and Rick gives the signal, everyone opens fire.

The Savior patrol is ambushed by Morgan and Carol’s trap, then Daryl leads the horde by bike and explosives towards the Savior stronghold. Fr. Gabriel rolls the armored RV into the stronghold’s wall and detonates the vehicle. It blows a huge hole in the building. Negan tries to fight back, but Rick has him pinned down. Rick is just about to advance and finish Negan when Fr. Gabriel stops him. The walker horde is close, Rick needs to move on to the next phase of the attack; people still need his leadership. Rick leaves after he takes a polaroid of Negan hiding behind the armored shell. That’s a weird beat, but I’m sure we’ll see the payoff later. 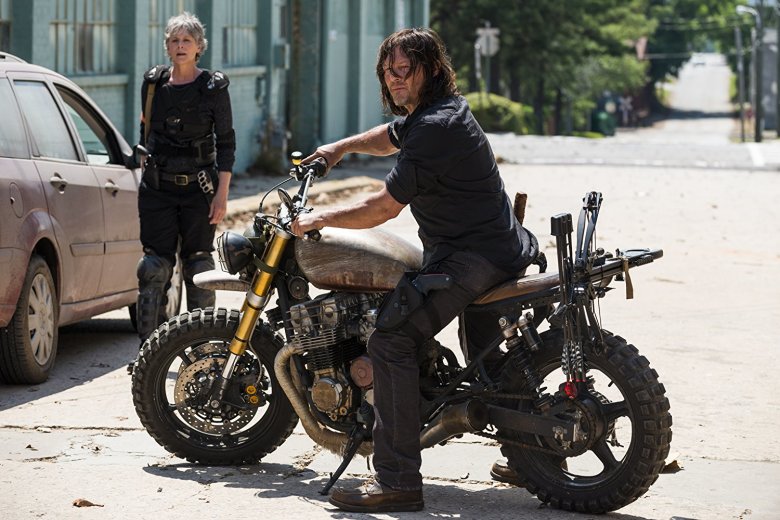 Fr. Gabriel is the last car out, but he spots Gregory crying for help. Fr. Gabriel leaves the car to help Gregory, but they get pinned down behind a barricade. Of course, Gregory ditches Fr. Gabriel and speeds off with his car. There’s a part of me that wanted to see Fr. Gabriel press a button and have the car explode, like the RV, but that didn’t happen. Instead, Fr. Gabriel fights his way through the walkers to the relative safety of a dark room with a solid door. The surprise is, he isn’t in there alone, Negan’s hiding in the same spot.

Daryl rides off on some secret mission, but Morgan, Carol, and Tara join King Ezekiel at a smaller Savior outpost, much like the media center they hit back in season six. At first, they take out the guard quietly, but a second guard throws a grenade. Carol warns the others to take cover just before it goes off. This was a great return and they show us many of our favorite characters which leaves me to wonder about some of the others. I already assume Jadis is safe, but where are Negan’s wives? When all hell broke loose and things looked grim, he didn’t check in with them? Not one of them came looking for him? That’s gotta hurt, right? “Mercy” was the 100th episode and there’s easily enough story space for a hundred more.