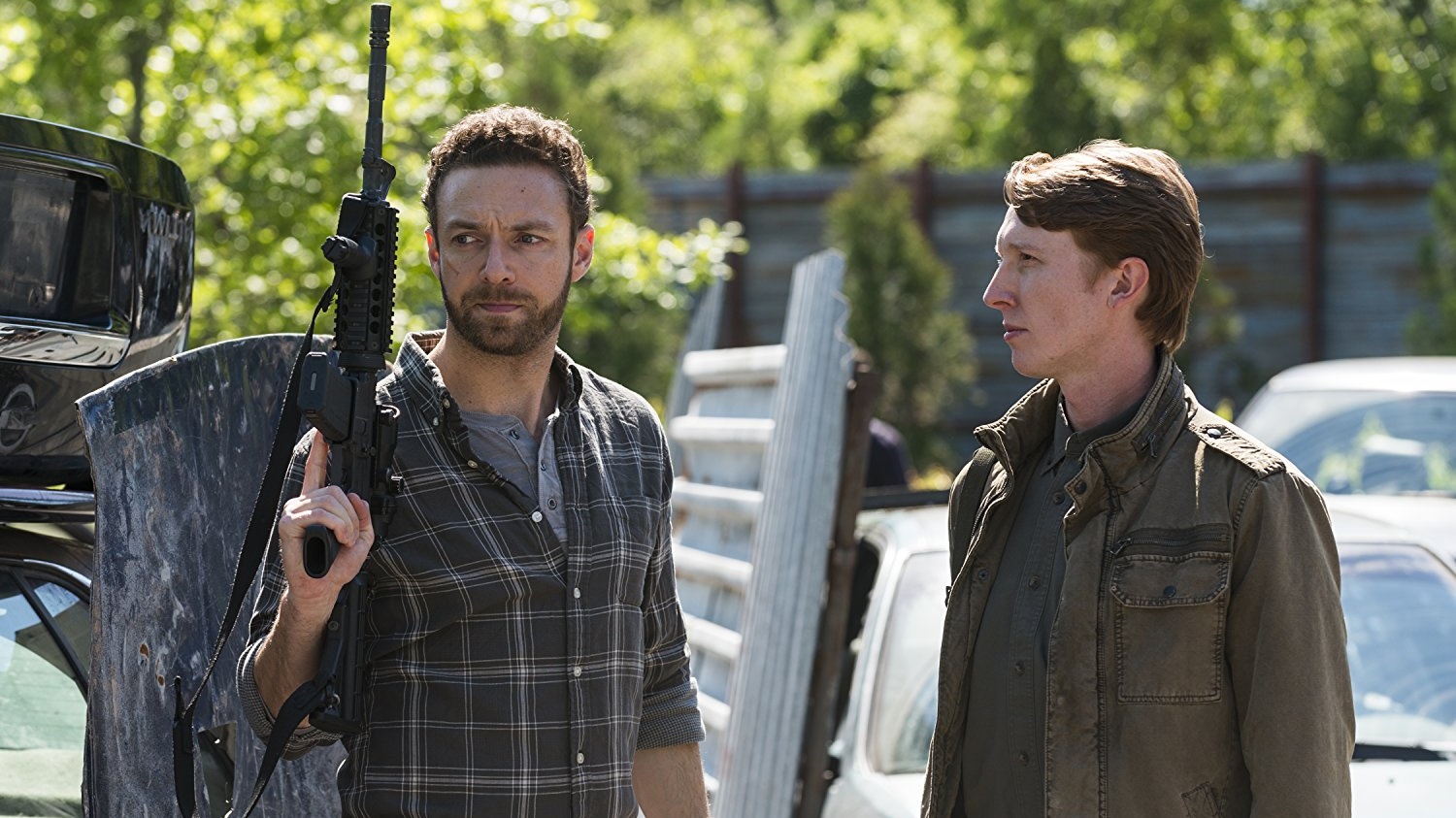 The Walking Dead slows down a bit as it revs up heavy heartache in “Monsters.” There are some major players we haven’t seen for a few episodes. Gabriel has been absent since Gregory betrayed him and there’s been no sight or sound of Jadis, Negan, Dwight, or Eugene since the season opener. Different factions of the Rick Alliance are under philosophical strain. Tara and Morgan want to execute their Savior prisoners while Jesus pressures them to wait until they get to Hillside and let Maggie decide. Savior Jared pushes his luck and needles Morgan as they head down the road. Then, the group is attacked by a rolling walker herd.

Some prisoners are killed while Tara and her troops fight off the walkers, but Jared’s string breaks off and heads into the woods. Morgan chases after them and starts to kill them when he catches up, but Jesus stops him from executing most of the lot. Jesus understands killing but he can’t agree to executing people. Morgan knows they can’t be trusted and must kill the enemy. Jesus and Morgan have an incredible fight. We know Morgan is very good and Jesus is quick and nimble, the fight does not disappoint. It ends in stale mate, but Morgan walks off alone. He can’t be part of a half-measured mission. Morgan may be right, but he knows Jesus isn’t the enemy. The group heads on to Hilltop with the remaining prisoners. 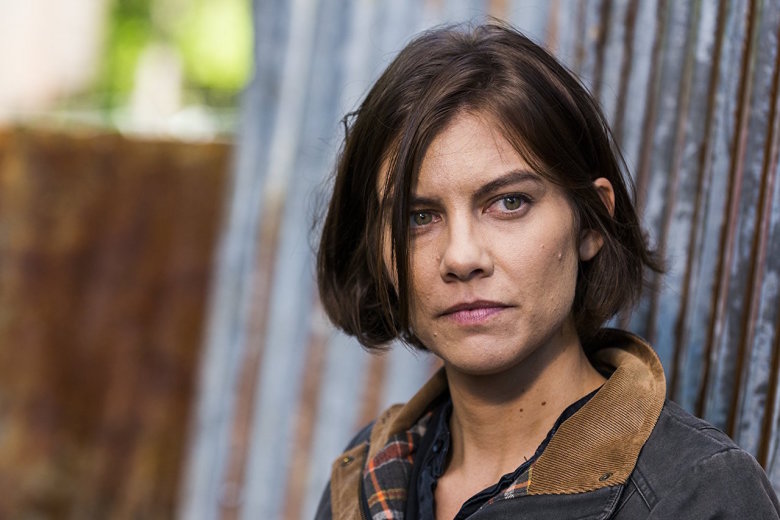 Gregory drives up to the gates of Hilltop but the guards won’t let him in. He pleads his case and Maggie eventually opens the gates just enough to ask why he’s driving Gabriel’s car without Gabriel. He says he doesn’t know the man and just walked up on the car. Gregory admits he ran off to make peace with Negan and claims Negan already knew about all the Rick Alliance attack plans. Gregory cannot be trusted but Maggie hears his plea for mercy and lets him in. Tara’s group arrives a moment later, Maggie doesn’t want to let the prisoners in and Gregory vehemently argues to keep them out. This isn’t the way Jesus thought it would go. He knows they can’t release them and he argues it’s be wrong to execute them. Jesus suggests they place them in the back trailers under guard. The only thing that isn’t in dispute, Maggie’s in charge. 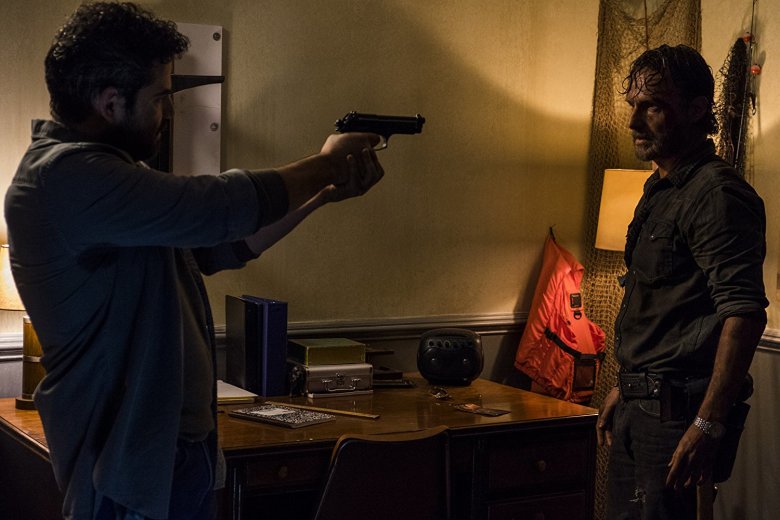 Rick tries to talk Morales into dropping his weapon but Negan convinced Morales that Rick is a monster. Like Morgan, Morales is another mirror character for Rick; what would he be like if he’d never met Glenn and the others? Morales waits for his backup, if possible, Negan wants Rick, the widow, and the King taken alive. Daryl finds them first and kills Morales, then they find themselves surrounded by the courtyard Saviors. Rick and Daryl are both running low on ammo and neither one of them found the weapons cache Dwight said was hidden in the building. Rick ends up popping a fire extinguisher to fog the hall long enough to give Daryl a chance to cross to safety, then Aaron and the others enter the building and save our favorite duo.

The emotional gravity of this scene comes from a voice we hear in the fog, Aaron’s. Aaron helped move Eric to a tree away from the main combat. He has a bullet wound and needs to get to Hilltop for care. There’s an exit wound, which is a good sign, but Aaron doesn’t want to abandon his lover in this condition. Eric tells him to go, the others need him, which is true. Aaron makes the gut-wrenching decision to leave his lover for a few minutes. When he returns from rescuing Rick, Eric has died, turned, and walked off to join a herd. Aaron never even got to say a proper goodbye, hurt on top of pain. Aaron asks to transport baby Gracie to Hilltop while Rick moves on to his next mission. It’s where he and Eric were headed next to update Maggie. 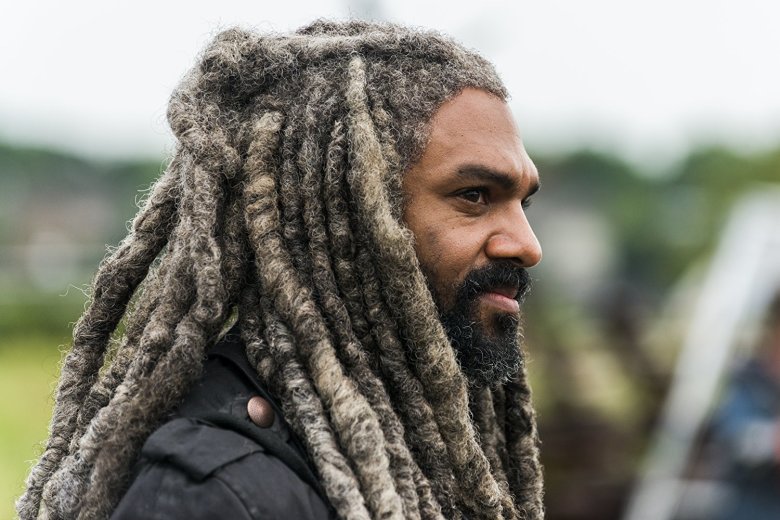 Rick and Daryl are just about to roll to their next target when someone opens fire on them from a tree. Rick suspects the shooter is alone and offers a deal, if the shooter tells Rick the information about the weapons he wants to know, he’ll let the shooter escape in a car. The shooter says the machine guns were transported to Gavin’s site the day before, then Daryl kills him. The important takeaway here is there are two .50 cal machine guns out there in Savior hands.

Finally, King Ezekiel leads Carol and his team against one Savior group after another. According to his fantastic monologue, he smiles and doesn’t lose a single person from his ranks. He out-thinks and beats three different sets of Savior teams before walking up on Gavin’s site. It looks abandoned and Carol goes ahead to check it out. That’s when King Ezekiel sees the machine gun barrel pointing out a high window. I’m sure we’re going to see some major heartbreak and loss next week, adding to the tragic turn of Eric.