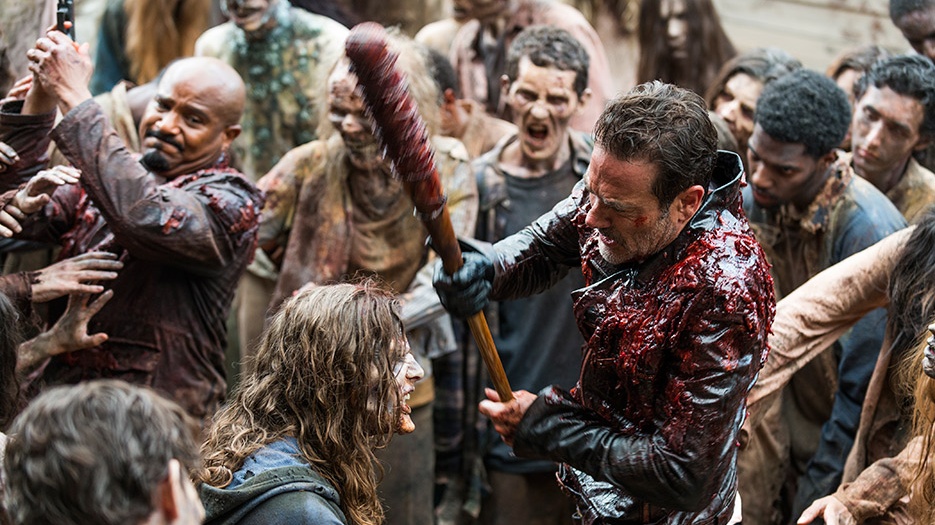 The Walking Dead returns to The Sanctuary to show Negan’s story during the Rick Alliance attack in “The Big Scary U.” Rick and Daryl question Yago, the last of the machine gun crew. He tells them everyone from his stronghold is dead, including Carol and King Ezekiel. Daryl assumes the Kingdom is a complete loss and gathers all the explosives he can carry from the weapons cache to blow a big enough hole in The Sanctuary to let the walkers mob in on everyone remaining, not just the soldiers but the workers too.

Rick doesn’t want to turn more families against his alliance, but Daryl doesn’t care, he’s not messing around anymore. They hit and throw each other around a bit, but the bag of explosives gets tossed by the burning truck. The whole cache, explosives included, goes up in a huge fireball. Daryl rides off leaving Rick to walk to the Scavenger lair. On route, Rick sees a helicopter fly overhead, but we don’t see where it lands. Who has a chopper? 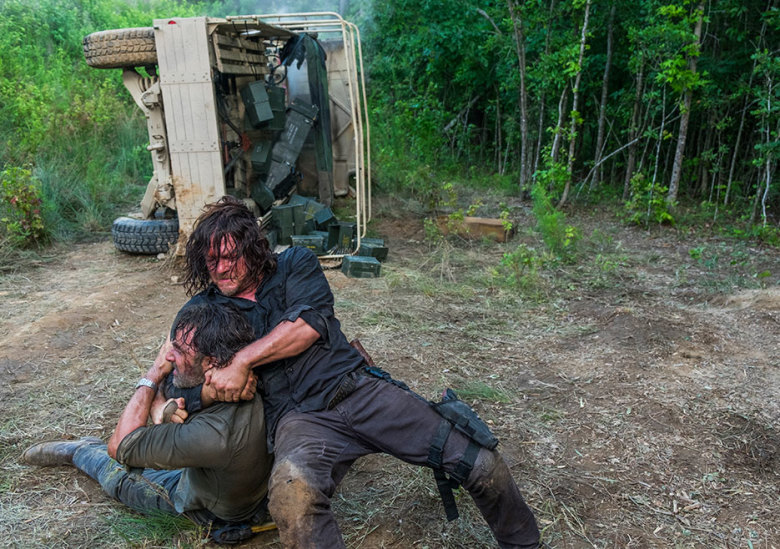 We get a quick look at Negan having a meeting just before Rick’s attack. He has Dwight, Simon, Eugene, a few outpost leaders, and Gregory seated around a conference table. Gregory convinces Simon he left Hilltop as soon as he suspected resistance activities to report trouble. Negan isn’t sure how to proceed, maybe neither Gregory nor Simon can get Hilltop people back in line. Simon suggests killing a lot of them and Gregory suggests banishing those that want to follow Rick or Maggie. Negan thinks both ideas are unacceptable. People are his most valued resources. He wants to keep as many of them alive as possible. Negan’s plan is to capture Rick, Maggie, and The King alive, then kill them publicly in the worst way. That’s when the Rick Alliance attacks.

A big part of this episode is exploring Negan and his leadership philosophy. They accomplish this by partnering him with Fr. Gabriel for most of the story. I wondered what Rick was going to do with Fr. Gabriel when he dropped into the dark room with him. I suspected Negan would kill Gabriel, but he doesn’t. That follows Negan’s concept of human resources, but it also allows Fr. Gabriel to chat Negan up, question his actions, and try to coax a confession out of the bat wielding maniac. Their entire sequence was talky, but effective from start to finish. 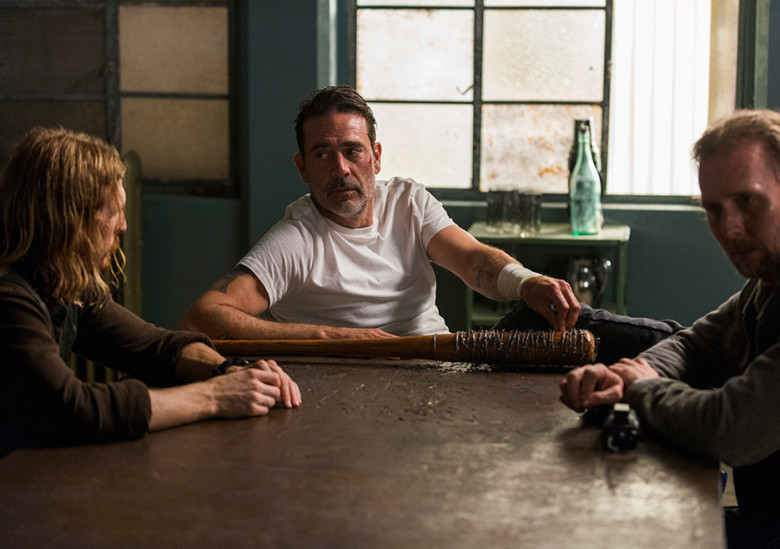 Meanwhile, Negan’s council assumes he’s dead and muddles through their next move. Gavin wants to flush out the rat that betrayed The Saviors, while Regina, Dwight, and Eugene discuss the more immediate issues of how to govern the workers. Regina thinks kicking the workers into line is the best method while Eugene suggests a much more cooperative, caring hand for keeping their peace and loyalty. Dwight sides with Eugene and so does Simon, for the most part. First order of business, stabilize Sanctuary. Second is find the traitor that informed to the Rick Alliance. They knew all the weak spots and when to strike.

After the meeting, Eugene brings a jar of his best cucumbers to Dwight; a “thank you” for taking his side. Dwight said it just made sense but Eugene knows most people probably suspect he’s the rat, he appreciates a friendly gesture. He also notices a fancy chess board Dwight is working on. He’s painting each piece with incredible detail. Eugene picks one up before Dwight can warn him and gets red paint on his finger, some of the pieces are still wet. Yes, it’s a clue for later! 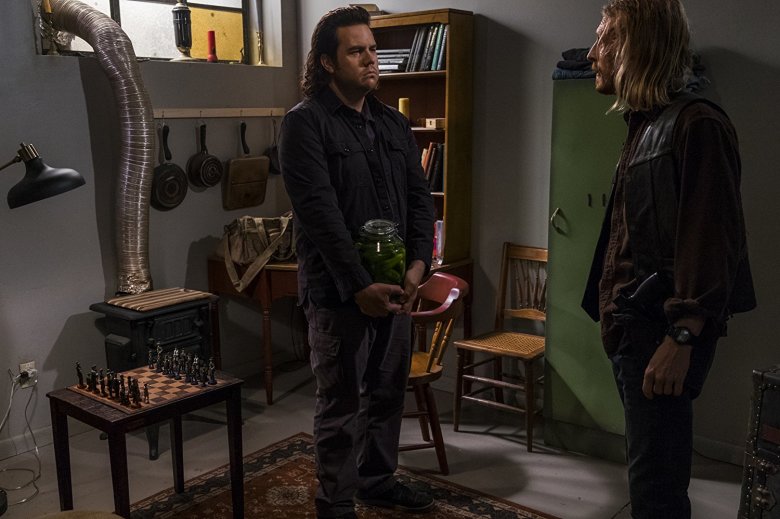 Meanwhile, Negan and Fr. Gabriel are still finding out about each other. Specifically, both men are interested in the other’s weaknesses. That was Fr. Gabriel’s mission with his parishioners, and it’s what Negan says he does with people. He helps them turn their weakness to strength. Negan claims he worked with kids before the outbreak, but doesn’t say in what capacity. Fr. Gabriel is Negan’s new mission, discover and build on his strength. Fr. Gabriel says he’s looking for purpose. My suggestion would have been to kill Negan.

Negan eventually gives Fr. Gabriel a confession. He admits he was a lying, cheating husband to his only real wife. She was terminal before the outbreak, but when she died and turned, he was too weak to finish her. He thinks that’s his big sin? They pact to work together, rub walker guts on their clothes and walk out through the horde surrounding their tiny building. It works for a while, but they end up having to shoot and bat their way to safety.

Meanwhile, Sanctuary loses power and the workers gather around the Negan council for answers. Regina is the first to lose her cool and fires on a few of the frightened workers. Then, we hear that familiar eerie whistle. Negan and Fr. Gabriel turn the corner and instantly the workers feel safer, if not saved. Negan has two men gently place Fr. Gabriel in a cell-closet, gets cleaned up, and returns to his council. Now the priority is finding the rat. Gavin finds a bag that had weapons in it, weapons form one of their locations. While Simon and the others focus on the guns, Eugene notices a smudge of red paint on the bag, the same kind Dwight uses on his chess pieces, but he doesn’t say anything about it… yet.