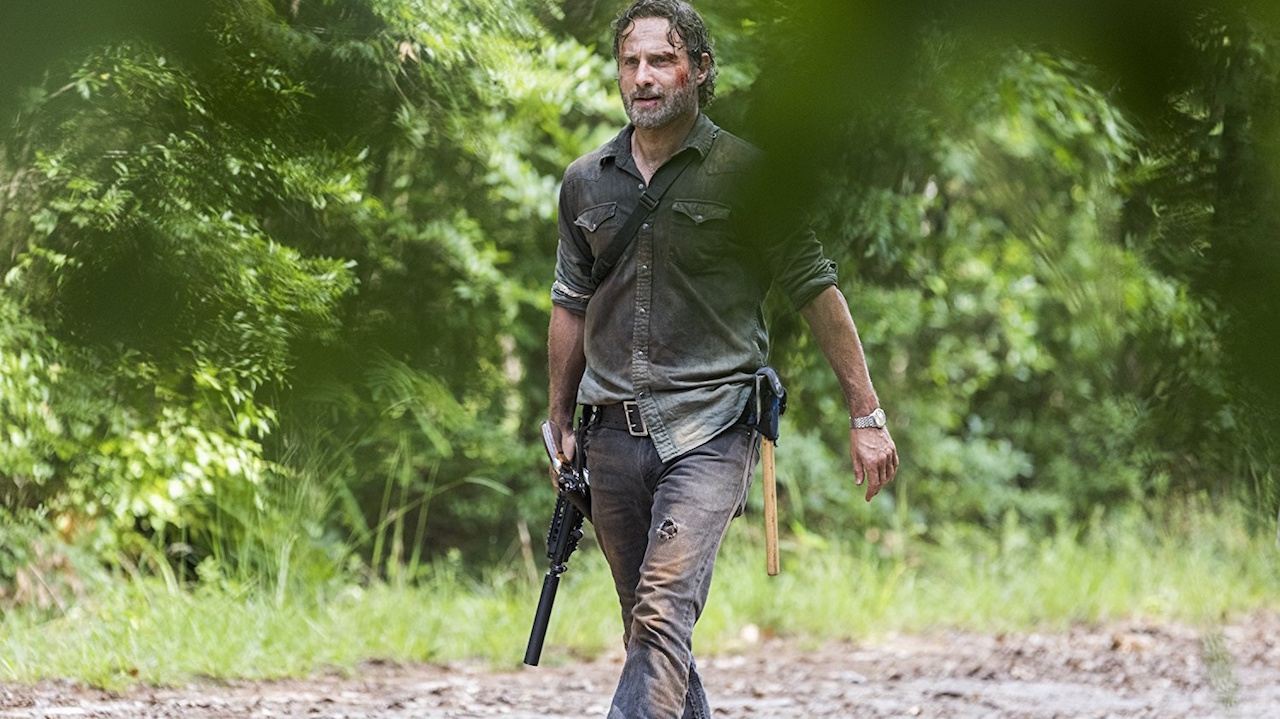 The Walking Dead catches up with the its main communities as Rick’s plan heads into phase two with “The King, the Widow and Rick.” Any decent soldier knows the importance of planning in launching a dangerous mission. However, a successful mission relies on training when the plan, or part of it, falls apart. Rick did a great job planning a multi-phase attack against Negan and The Saviors, but everything didn’t go as planned. As he forges on with phase two, he loses Daryl’s confidence. Rick planned a good messaging system to keep the leaders of Hilltop, Alexandria, and The Kingdom informed of the attack’s progress while he moves on to The Scavengers to offer Jadis another chance to join the winning alliance.

Jadis listens to his offer, join him on the winning side or be destroyed after they defeat the rest of The Saviors. He shows her photographic proof of the first phase successes, but she doesn’t accept his terms. Either she doesn’t trust Rick after shooting him or she doesn’t really believe his alliance has defeated the Negan Nation. She strips Rick and locks him up in one of her cargo containers. Daryl knew where Rick was headed, but I wouldn’t count on him showing up to rescue him anytime soon, they don’t see eye to eye about destroying The Sanctuary. 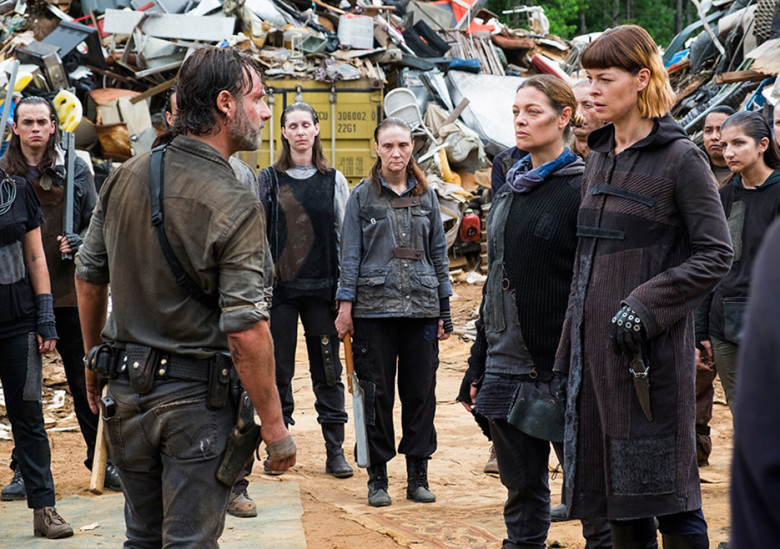 Daryl isn’t the only one diverging from Rick’s decisions. Carl tracks Siddiq, the guy Rick shot at and drove away, through the woods. He waits by a walker-trap Siddiq made, when he shows up to finish the walker, Carl steps out to offer him food and water. Siddiq is in no position to pass it up, but he doesn’t understand why Carl is helping a man his father told him to forget. Carl thinks this is something his mother would have wanted, he asks Siddiq the three questions for membership to the club and invites him to join Alexandria. First, they stop to free some walker souls, get overwhelmed, and Carl almost gets killed, but they continue home like old buddies after street-ball. This has to be a set up for something in the back half of the season.

Tara agrees with Daryl, phase one didn’t go far enough. They ride off together to kill more at Sanctuary. Rosita and Michonne read the message about the Sanctuary attack but both want to see it up close, they also hit the road to satisfy their thirst for revenge. They pull over a few miles from Sanctuary when they hear music blaring from a loud speaker. They follow the sound through the woods to a hidden Savior supply warehouse. Only two Saviors, Leo and Zia, guard the joint but they plan on driving a truck with several loud speakers to Sanctuary to lure the walker horde away. Negan has people stashed everywhere. 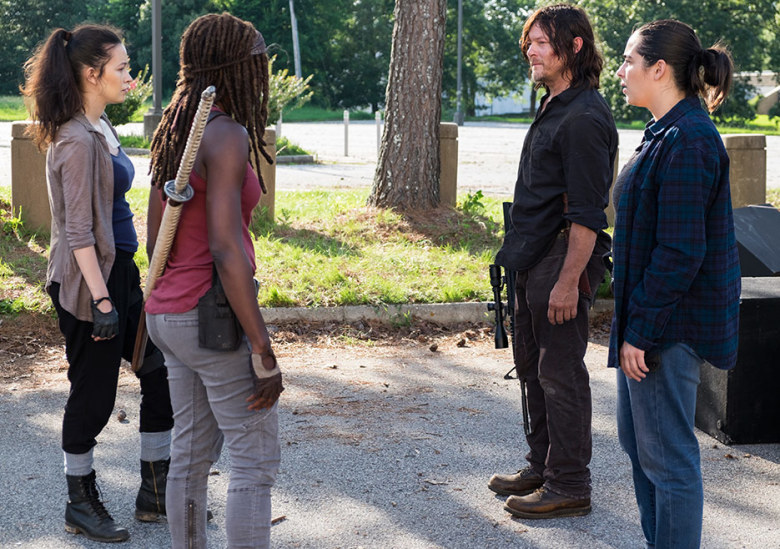 Rosita and Michonne take on the two combatants, but neither one of them has completely recovered from their wounds. Eventually, Leo faces Rosita and a rocket launcher. He doesn’t win that battle (Rosita obliterates him) but Zia escapes with the speaker truck. She makes it about two blocks when Daryl and Tara t-bone the smaller truck and finish her off. The four of them head to Sanctuary together, Rosita and Michonne just wanted to see the damage, but Daryl and Tara are ready to blow the place down.

Carol is ready to fire into the next phase of the attack plan, but she needs King Ezekiel to play his part, motivate, and lead more of his people. Ezekiel is anchored with depression over losing the bulk of his command and Carol challenges his case of the mopes. Ezekiel didn’t play the King part for special privileges, he did it to care for people who needed something to believe in. Carol reminds him that the most vulnerable people need their King now more than ever. Ezekiel doesn’t jump up and grab his scepter, but I have faith he’s considering it. In the meantime, Carol heads off with young soldier Henry to begin phase two. 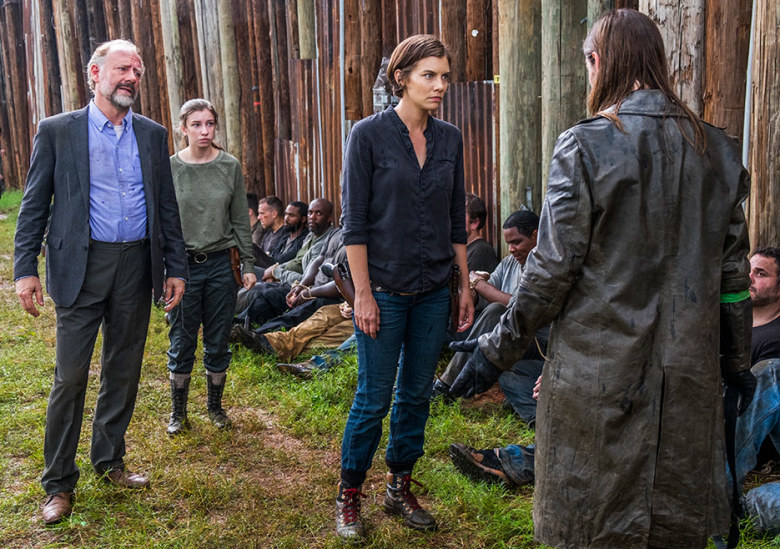 The final piece takes place with Maggie, Jesus, Gregory and a bunch of prisoners at the Hilltop. Maggie doesn’t understand why Jesus brought a flock of prisoners to Hilltop. She neither agrees with Gregory’s advice to execute them nor Jesus’ plan to feed and care for them until after the battle. She keeps them tied up outside the Hilltop walls while she reaches a decision. She knows they’re dangerous and can’t be trusted. Savior Jared is obvious, he resists every move they make, but there could be other snakes in the group. Eventually, she has them moved into a wire detention pen inside the walls and throws Gregory in with them. Jesus assumes she’s showing mercy but she tells him they might have use as bargaining chips, maybe to swap for their doctor or Fr. Gabriel. If they have no use for trade, she plans on killing them. Not exactly the mercy Jesus was hoping for, but he did say he’d follow her decision.

I’m excited to see what Jadis has in store for Rick. Maybe she trades him to Sanctuary survivors for a jar of pickles? I hope she keeps him locked up long enough for team Daryl to do some unexpected, unplanned damage at Sanctuary. I’d also like to see Jared and Gregory form an escape committee and die hideous deaths. Plus, where did that helicopter from last week go and why hasn’t Rick mentioned it to anyone? Two episodes left until The Walking Winter Break, we need at least one more big turn.