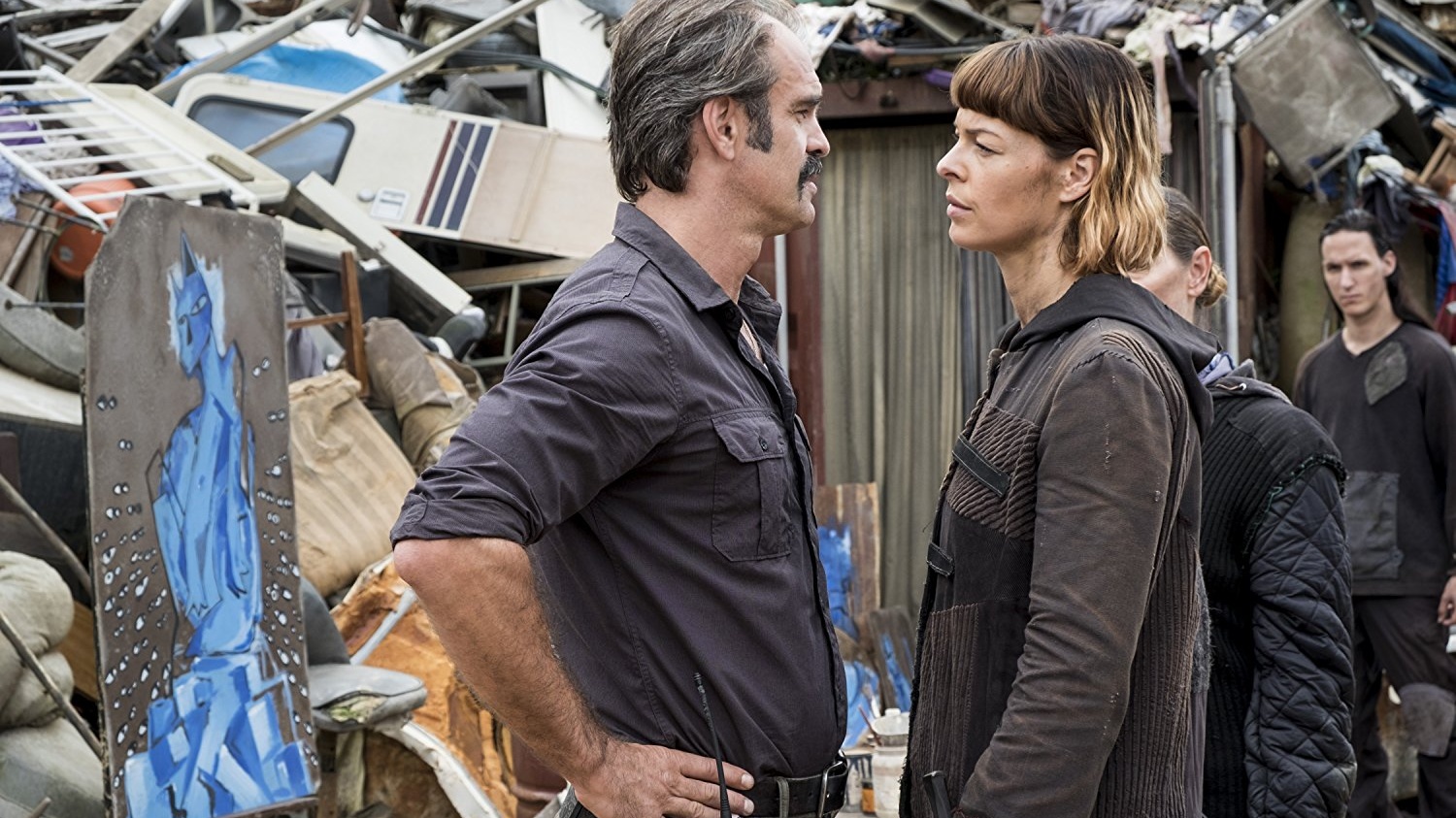 The Walking Dead torment Jadis when Simon goes off book in “The Lost and the Plunderers.” This episode checked in with several characters we haven’t seen in a while. Enid and Aaron are captured by Cyndie’s Oceanside patrol after killing Cyndie’s grandmother, Natania. Enid and Aaron make the case for Cyndie’s community to join the attack against Negan. They decline, Alexandrians have done nothing but take from them. Guns to start, then their leader. Cyndie makes the ultimate decision to let them go, but Aaron stays behind to gain their support or find other allies. Enid heads back to Hilltop with instructions to tell Maggie not to press Oceanside further. We don’t see Maggie this week, but she does send Negan a message.

Negan receives a coffin with a message, “We have 38 more. Stand Down.” Walker Dean is squirming inside killed by Maggie. Negan is a little behind on his exact number of losses but he knows his human resources are low and his ammunition is even lower. Simon wants to attack Hillside and rescue his satellite outpost people, but Negan has other plans for him. He wants Simon to ride to the scrapyard, get an apology from Jadis and kill one of her people. Just one, he is very clear. Simon suggests Negan’s saving isn’t going well. They should cut their losses and go find a less aggressive community to save. The idea enrages Negan. Everything will be okay once they deal with toxic Rick. He still wants to save as many people as possible. 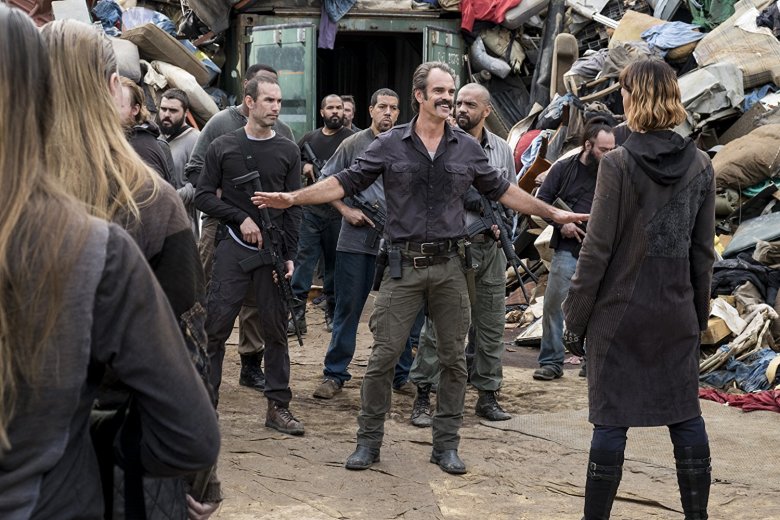 Simon is surrounded by team Jadis immediately upon entering the scrapyard. He conveys Negan is willing to give her a pass but demands a heartfelt apology and all their guns. Jadis apologizes as the saviors collect their weapons. Once disarmed, Simon starts to push Jadis. He kills one of her friends, then her best friend. Jadis punches Simon in the face, hard. Then, he orders his men to kill all the scavengers, except Jadis. Simon returns to Sanctuary but deceives Negan about the slaughter he committed. Negan still has a full day of bad news ahead.

Michonne grieves in different ways than Rick but they both struggle with Carl’s loss. Michonne tries to save a burning gazebo Carl enjoyed sitting on, but there are too many walkers and Rick pulls her away to move on with his mission. That’s his way of grieving. He wonders what Carl meant with his dying plea, did he really want Rick to surrender to Negan? Michonne also considers his challenge but in a much more compassionate, intellectual way. Rick heads to the scrapyard to appeal to Jadis, he still needs her fighters and their guns. 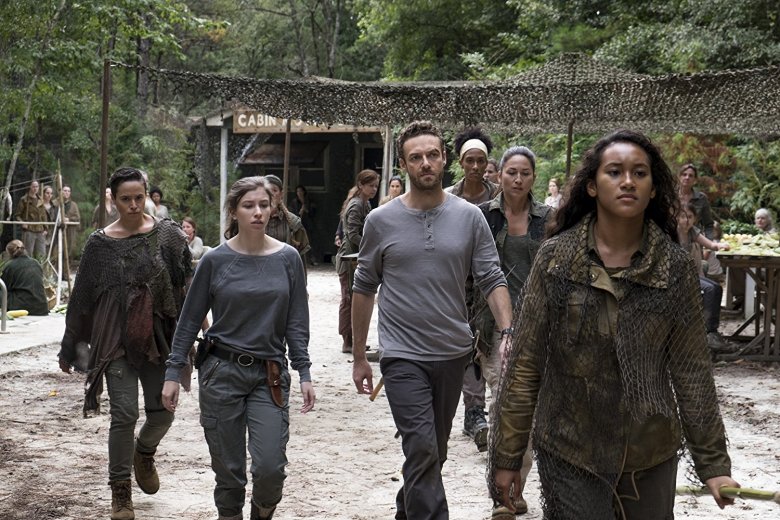 Rick and Michonne walk into a trap left by the saviors, a noisy avalanche of metallic junk covers their exit and calls to the scavenger walkers. Rick and Michonne slash the closest walkers and scramble up a heap where they find Jadis, teary-eyed in a night gown. She explains, in very clear language instead of her trade mark scavenger lingo, that saviors decimated her people and throws a little blame towards Rick. Since she no longer has what he came for, Rick prepares a way out with Michonne. Jadis asks to go with them, but Rick abandons her after holding the slaughter of her people over her head.

Jadis takes a lot of unnecessary abuse this episode. She was never Rick’s enemy. She just wanted to keep her people safe in their own little world, much like the Oceanside community. I hope they have bigger plans for Jadis. We get it, people have to take sides in this struggle, but it’s also important to properly identify the enemy. Jadis tricks the remaining scavenger walkers into a giant industrial shredder and watches them all destroyed. Where does she go now? She’s likely to assume Negan ordered the scavengers destruction, even though he didn’t. 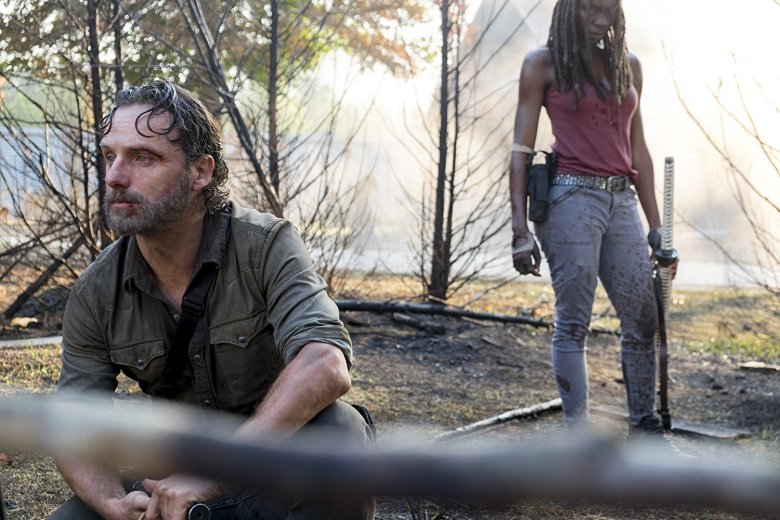 Michonne tries to convince Rick to go back for Jadis, she thinks it’s what Carl would have wanted. Rick pulls over and reads the letter Carl wrote to Negan, then calls him on the radio. Negan is shocked to hear about Carl’s death. For a moment, he’s concerned that Carl was killed by saviors blowing up Alexandria. Rick tells him the truth about how Carl died helping someone in the woods. Negan gives Rick a taste of his own medicine and tells him something I’m sure he already feels, he blames him for Carl’s death. He reminds Rick he failed as a leader and as a father. Rick reads Carl’s words for Negan, a call for peace. Then, Rick adds that he’s still going to kill Negan. These two are proper enemies, even if you remove Carl from the equation, they’ve killed too many of their friends to throw down peace. Even if they did, there are loose cannons on both sides, like Simon or Morgan.

The news of Carl’s death, and his letters, still hasn’t hit Carol, Maggie, Enid, or Aaron. Plus, Negan sent a group to negotiate an apology from Maggie. There are many interesting shock waves headed towards Negan and Rick alike. Both sides need to regroup and leaders need to remind everyone why it’s vital to fight. Sorry Carl, the world just works that way.