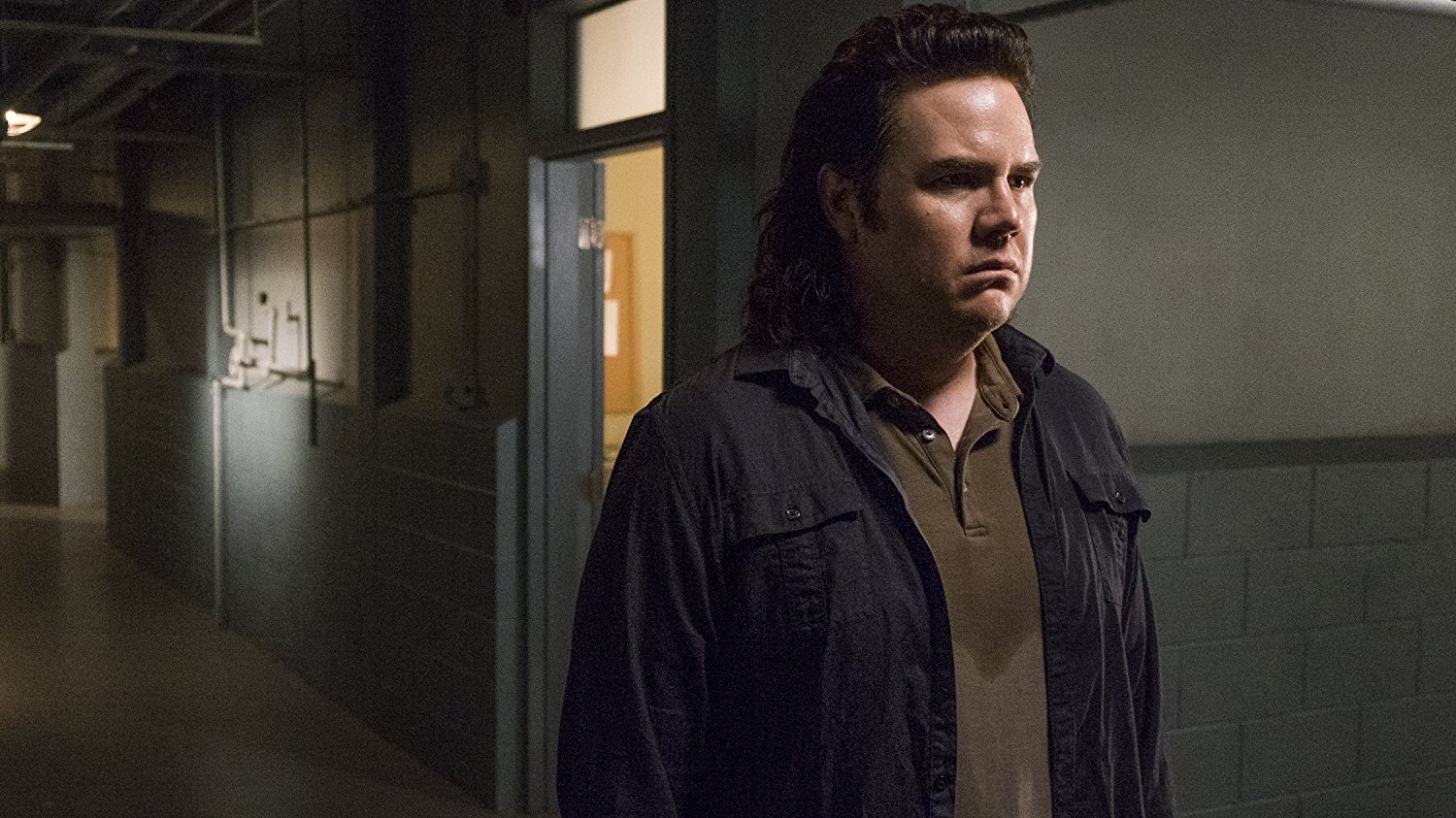 The Walking Dead turn to Eugene for heavy dilemma in “Time for After.” This episode had a little of everything; humor, action, and drama but leaned on Eugene to quarterback the suspense and tension. Jadis releases Rick from his steel box long enough to take a few pictures and make a quick sketch. She plans on making a wire sculpture of Rick but doesn’t plan on him living much longer. Rick gives her another chance to surrender or join his alliance, but no one takes the guy seriously, his light blue boxers don’t offer much leverage.

Jadis brings Rick out a while later to face a walker on a leash. She watches as the handler pushes the walker closer to Rick for a bite, but he fights back. Rick quickly defeats the guys sent to hold him down and takes control of the walker pole himself. Jadis tries shooting Rick as he pulls the walker’s head off but he counters and wrestles her down right next to its face. Rick gives her little choice, either she gets bitten by the walker head, or she lets him walk out of there and they both live. Jadis releases Rick but also agrees to join his attack, again, for a share of the take and a chance to sculpt him later. 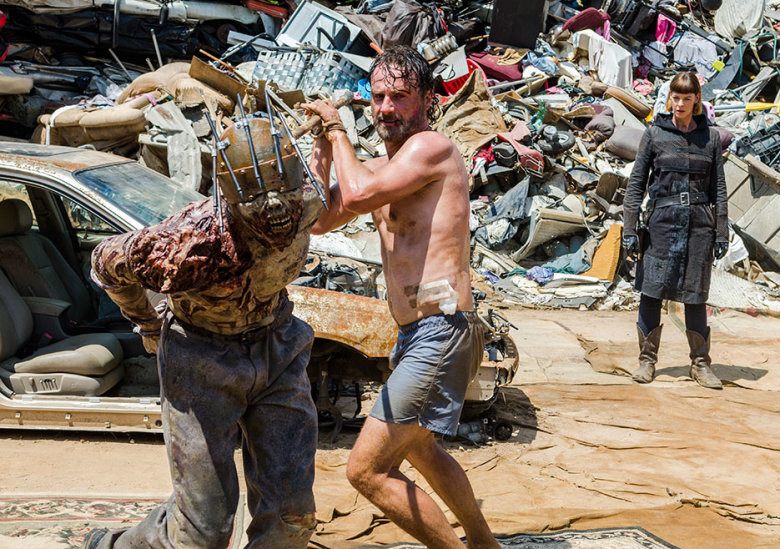 The other two story pieces go down concurrently. First, Daryl’s truck with Michonne, Tara, and Rosita arrives ready to knock a whole into sanctuary, let the walkers in, and force the workers out the back stairs. Morgan, leader of the snipers, says they’ll provide cover and help the attack even though it’s not part of Rick’s plan. Rosita has second thoughts and decides to give Rick’s plan more time, but Tara disagrees. The speaker truck almost broke through and pulled the walkers away, something else could go wrong and ruin Rick’s plan. A little while later, Michonne also has second thoughts and leaves the truck assault to Tara and Daryl.

While the drama simmers outside, Dwight and Eugene wade through waves of dilemma inside. Eugene begins with logic, he makes lists of the things he knows, the things he doesn’t, and the possibility for chaotic surprises. Soon, he gets a visit from one of Negan’s wives. He made a deal to fix her boom box and she arrives to collect and rub his face in the fact that he chickened out on his first chance to kill Negan with poison. This happens throughout the episode, everyone has an idea about what they think Eugene should do, most of them judge him as an opportunist or straight up coward. Dwight and Negan are the only two exceptions. 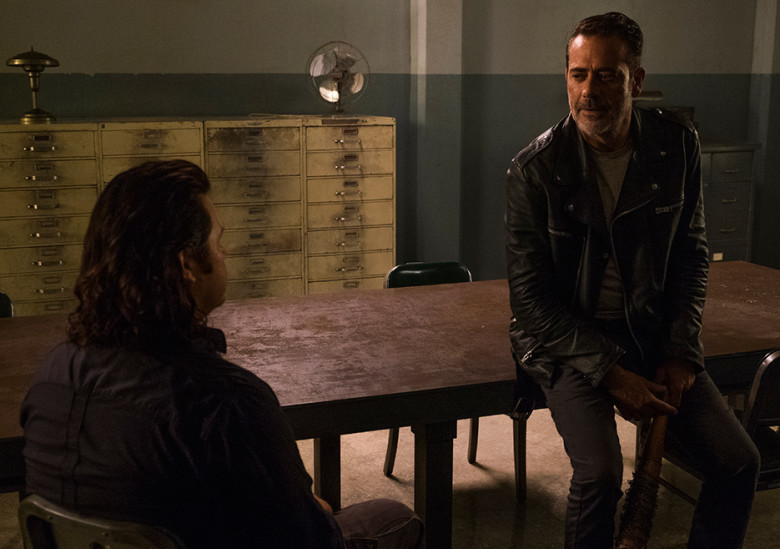 Eugene confronts Dwight about his treachery. Eugene is certain Dwight betrayed the Sanctuary, but he has no real proof and doesn’t know to what extent. Eugene tells Dwight he’ll keep his secret if Dwight doesn’t harm or allow further harm to the people of Sanctuary. Dwight does not agree, he’s convinced Rick’s team will defeat Negan and the Saviors. These two disagree but neither judges each other. Still, they’re on track to one killing the other. Dr. Karson asks Eugene to sit with Fr. Gabriel while he goes to the market to try and mix up a natural cure. Gabriel tries to convince Eugene to do the right thing and sneak Dr. Karson out of Sanctuary and get him back to Hilltop where Maggie and others need him. Eugene isn’t convinced Gabriel knows what the right thing is any more than Negan.

Negan also calls on Eugene for a strategy session. Negan gives one of his speeches about the importance of saving as many people as possible and emphasizes how much faith he has in Eugene to develop the best strategy for survival. There’s a weird beat where Negan reaches out to shake Eugene’s hand and Eugene almost kisses it. Negan withdraws his hand and confirms it was only meant to be a handshake of respect. Eugene scuttles off to do some heavy thinking. 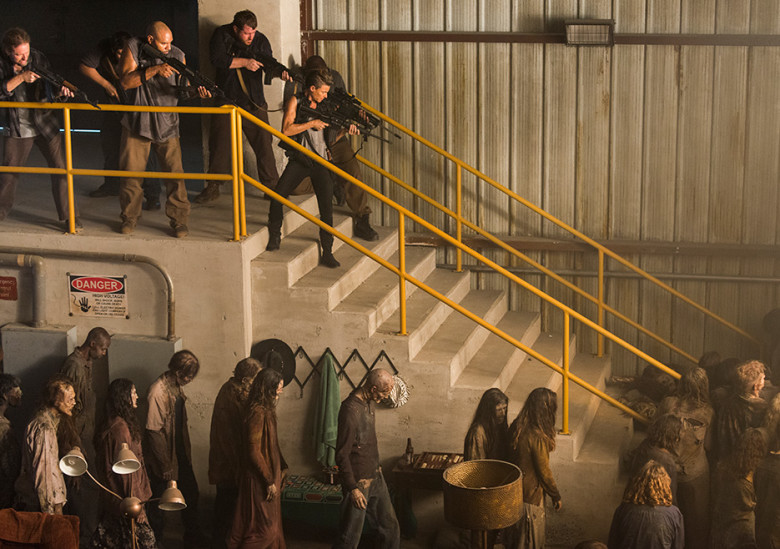 Eugene builds a drone boom box and plans to fly it over the walkers gathering at their walls and Pied Piper them down the road until the drone is out of range. He goes to the roof to launch his experimental craft, but Dwight follows him and puts a gun to his head. Eugene calls Dwight’s bluff and launches the flying music box. The walkers immediately notice the noise. This puts Dwight in a tough spot, if he kills Eugene on the roof, he’ll have to give Negan an explanation what happened to his bullet maker. Instead, Dwight shoots down the drone and lets Eugene live.

Daryl and Tara hear the music and launch their attack while the walkers are still close. Daryl aims the truck at the Sanctuary wall but rolls out of it before it slams through. The walkers work their way in from the sides as planned and fill the main worker-market area of Sanctuary. Armed security Saviors fight the walkers and evacuate as many unarmed workers as possible, even Dwight stays behind to cover their escape. Eugene thinks fast and runs to Negan with a solution for evacuating their work force. He almost outs Dwight, but when he arrives with several other Saviors, he keeps the secret to himself.

Rick finally arrives at the perimeter, but the lookout is dead and there’s no radio chatter from Morgan or the others. Also, the walkers have completely disappeared from the courtyard. This isn’t the scene he promised Jadis and her scavengers. Next week is the mid-season finale. I’d be happy enough to see how things shake out between Eugene and Dwight, but the producers are making promises of one or two big shockers.